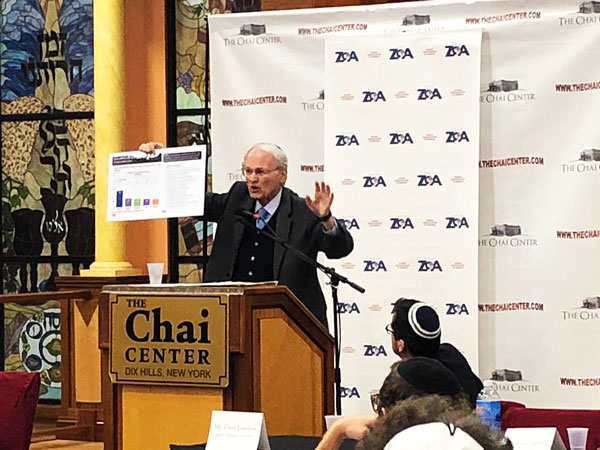 On April 11, 2019, the Chai Center of Dix Hills, New York, hosted a program entitled, “Antisemitism in America and the Deafening Silence,” featuring ZOA National President Morton Klein as the keynote speaker. Mr. Klein was met with a standing ovation – before he even uttered a word.

When he introduced Mr. Klein, Rabbi Yaacov Saacks called him a hero. It was standing room only, with hundreds in attendance, from high school students to senior citizens.

Mr. Klein spoke about his testimony before the House Judiciary Committee on April 9, during which he was interrupted as soon as he mentioned the name Ilhan Omar, a Congresswoman from Minnesota who has used antisemitic language to criticize Israel and its supporters. After the hearing, Mr. Klein was surrounded by people who falsely attacked him as an Islamaphobe.

Mr. Klein said, “The most serious issues facing Jews and maybe the world today, are Islamic antisemitism and Islamic Jihadism. Sixty percent of hate crimes are against Jews.” He spoke about growing antisemitism coming from the leftist Muslims now in Congress, and how this problem is largely ignored not only by government officials and the media, but also by the Jewish community. He mentioned other Jewish organizations and how they fall short of the mark when it comes to this issue.

Mr. Klein went on to explain how the Boycott, Divestment and Sanctions (BDS) movement is escalating and creating a hostile environment for Jewish and pro-Israel students on many college campuses. Just recently, the Students for Justice in Palestine (SJP) chapter at NYU announced that it will be receiving the coveted President’s Service Award, which recognizes student groups “that have had an extraordinary and positive impact on the University community.” SJP is a nefarious antisemitic group which has had exactly the opposite impact. As the Jerusalem Center for Public Affairs determined in its research and policy study, SJP “is a terror-affiliated anti-Semitic network that currently operates with autonomy and impunity at colleges and universities across the United States.”

A critical part of the ZOA’s mission is fighting campus antisemitism and advocating for students who face antisemitic harassment and intimidation on their campuses. Mr. Klein told the audience that not once has ZOA received any calls about antisemitism on campus from neo-Nazis or white supremacists. He also spoke about how Jews are being targeted on the streets of Brooklyn in unprecedented numbers simply for being Jewish, yet this frightening problem is not being addressed forcefully and effectively. From campus to Congress, antisemitism is on the rise, and Mr. Klein sent the strong message that it is incumbent upon all of us to stand up and fight it, from wherever it comes – even if it means standing alone.

To rousing applause, Mr. Klein concluded his talk with a passionate declaration of the extraordinary miracles that the Jewish people and Israel have experienced. The program proceeded to a question-and-answer period, followed by dessert. Mr. Klein, as well as Deborah Peretz, ZOA Regional Director for Long Island, and Liz Berney, Esq., Director of Special Projects, stayed to speak with attendees, answer their questions, and let them know how they can support the ZOA.  One young woman, with tears in her eyes, commented, “This man said everything I feel, everything I try to express. He put my beliefs about antisemitism and the situation in this country into words as I never could. I have to be involved in ZOA.”

We would love to hear from you! Please fill out this form and we will get in touch with you shortly.
Trending Z
Uncategorized April 16, 2019
FLASH: ISRAEL-JORDAN PEACE TREATY (1994) GUARANTEES JEWS ACCESS TO THE TEMPLE MOUNT – LET MY PEOPLE PRAY
Uncategorized April 16, 2019
ZOA Analysis: Most American Rabbis Who Are Boycotting Some Israeli Ministers Are From Extremist Left Wing Groups (J Street; T’ruah; JVP)
Uncategorized April 16, 2019
Israel’s “Right of Return” Grandparent Clause is De-Judaizing the Jewish State – Eliminate It
Uncategorized April 16, 2019
Exclusive: ZOA Accuses Ilhan Omar of Hating the U.S. ‘as Much as Israel,’ Lauds Kevin McCarthy for ‘Throwing Her Off the HFAC’
Center for Law & Justice
We work to educate the American public and Congress about legal issues in order to advance the interests of Israel and the Jewish people.
We assist American victims of terrorism in vindicating their rights under the law, and seek to hold terrorists and sponsors of terrorism accountable for their actions.
We fight anti-Semitism and anti-Israel bias in the media and on college campuses.
We strive to enforce existing law and also to create new law in order to safeguard the rights of the Jewish people in the United States and Israel.
Our Mission
ZOA STATEMENT
The ZOA speaks out for Israel – in reports, newsletters, and other publications. In speeches in synagogues, churches, and community events, in high schools and colleges from coast to coast. In e-mail action alerts. In op-eds and letters to the editor. In radio and television appearances by ZOA leaders. Always on the front lines of pro-Israel activism, ZOA has made its mark.
Related Articles
OP-ED ZOA: NSC’s McMaster – Reassign Him to Area Not Dealing with Israel or Iran