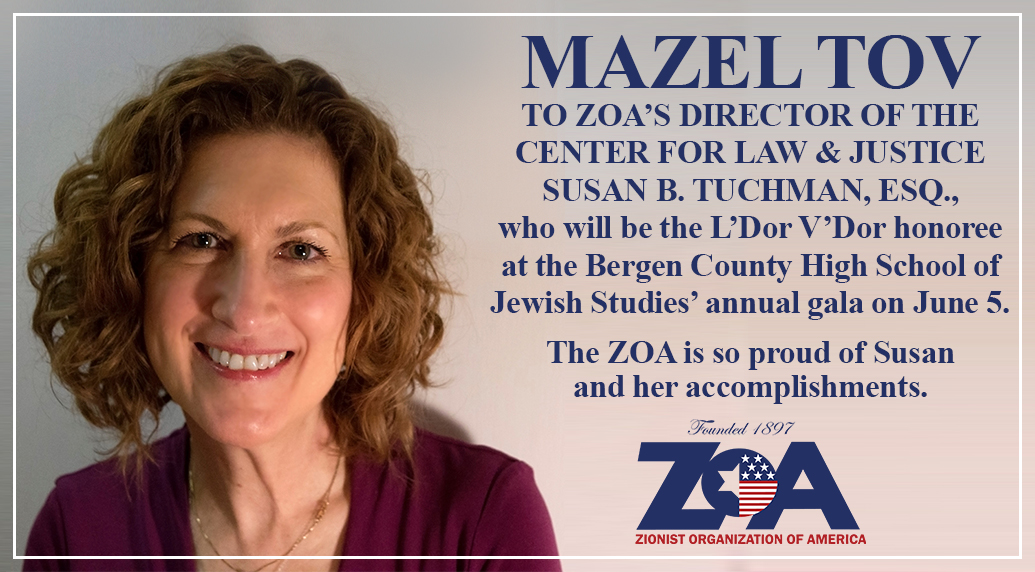 The Zionist Organization of America (ZOA) congratulates Susan B. Tuchman, Esq. on her upcoming honor by the Bergen County High School of Jewish Studies in recognition of her incredible, trailblazing efforts!

Susan B. Tuchman, Esq., director of ZOA’s Center for Law & Justice, will receive the L’Dor V’Dor award at the annual gala dinner for the Bergen Country High School of Jewish Studies (BCHSJS) on June 5, 2019. This award recognizes people who further Jewish continuity by supporting programs for Jewish teens and there is no one more deserving than our colleague, Susan.

In 2016, Susan Tuchman was chosen by The Forward as one of the “50 most influential members of the Jewish community” based on her legal work on behalf of Jewish students.

In an article about the gala’s honorees, the Jewish Standard detailed Susan’s impressive experience, noting that, “Under her leadership, the ZOA filed a groundbreaking civil rights complaint of anti-Semitism at the University of California at Irvine, and led a battle that included rallying other national Jewish organizations and finding bipartisan support from Congress. The outcome was that Jewish students now are protected from anti-Semitic harassment and intimidation under Title VI of the Civil Rights Act.”

Susan also led the way for the U.S. Department of Education’s Office for Civil Rights’ groundbreaking decision in 2018 to use the U.S. State Department’s working definition of anti-Semitism. This was a direct result of ZOA’s 2011 case against New Jersey’s Rutgers University, which alleged that Jewish students were subjected to a hostile campus environment in violation of Title VI of the Civil Rights Act.

Susan has made tremendous accomplishments over the course of her career and the Jewish people all over the world benefit from her tireless efforts and hard work, especially in the New York metropolitan area. In addition to advocating on behalf of Jews across the globe, as the director of ZOA’s Center for Law & Justice, Susan has lectured across the country to people of all ages about campus anti-Semitism and the ZOA’s leading role in fighting it. She is committed to ensuring that students and their parents are aware of the legal rights owed to them and will never turn down an opportunity to educate and encourage change.

The entire ZOA team wishes our sincerest congratulations to our dear colleague and we wish her much continued success in all of her endeavors. We hope to continue to learn from Susan for many more years to come.

Click here for more info on the BCHSJS annual gala.

We would love to hear from you! Please fill out this form and we will get in touch with you shortly.
Trending Z
Uncategorized June 4, 2019
FLASH: ISRAEL-JORDAN PEACE TREATY (1994) GUARANTEES JEWS ACCESS TO THE TEMPLE MOUNT – LET MY PEOPLE PRAY
Uncategorized June 4, 2019
ZOA Analysis: Most American Rabbis Who Are Boycotting Some Israeli Ministers Are From Extremist Left Wing Groups (J Street; T’ruah; JVP)
Uncategorized June 4, 2019
Israel’s “Right of Return” Grandparent Clause is De-Judaizing the Jewish State – Eliminate It
Uncategorized June 4, 2019
Exclusive: ZOA Accuses Ilhan Omar of Hating the U.S. ‘as Much as Israel,’ Lauds Kevin McCarthy for ‘Throwing Her Off the HFAC’
Center for Law & Justice
We work to educate the American public and Congress about legal issues in order to advance the interests of Israel and the Jewish people.
We assist American victims of terrorism in vindicating their rights under the law, and seek to hold terrorists and sponsors of terrorism accountable for their actions.
We fight anti-Semitism and anti-Israel bias in the media and on college campuses.
We strive to enforce existing law and also to create new law in order to safeguard the rights of the Jewish people in the United States and Israel.
Our Mission
ZOA STATEMENT
The ZOA speaks out for Israel – in reports, newsletters, and other publications. In speeches in synagogues, churches, and community events, in high schools and colleges from coast to coast. In e-mail action alerts. In op-eds and letters to the editor. In radio and television appearances by ZOA leaders. Always on the front lines of pro-Israel activism, ZOA has made its mark.
Related Articles
OP-ED BY: ZOA Staff New Poll: Americans By 2-To-1 Margin Blame Palestinians For Talks’ Failure