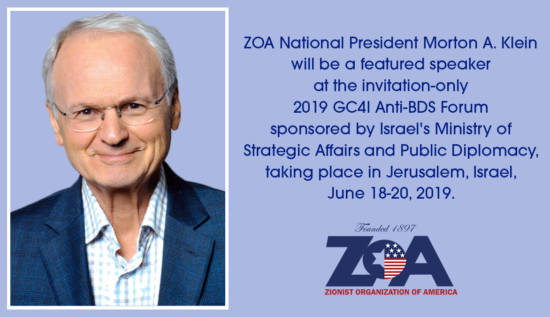 The Zionist Organization of America (ZOA) is pleased to announce that ZOA National President Morton Klein will be a featured speaker at the invitation-only 2019 GC4I Anti-BDS Forum sponsored by Israel’s Ministry of Strategic Affairs and Public Diplomacy. The conference will take place in Jerusalem from June 18th through the 20th at the Inbal and Waldorf Astoria hotels.

Klein’s segment, on June 19, will be a moderated dialogue conducted between him and Eric Fingerhut, Hillel International President and incoming President of the Jewish Federations of North America, on the topic of “How the BDS campaign is convincing young Jews to support the boycott of Israel.”

Officials of the Ministry of Strategic Affairs have been expressing alarm at the recent surge of Jewish youth engagement in, and sometimes leadership of, the BDS campaigns of a number of countries. Klein was invited to present his American perspective specifically because of his reputation as a relentless fighter against BDS and because of ZOA’s longstanding record of combating BDS, antisemitism, and other manifestations of delegitimization and hatred singling out Israel and the Jews. ZOA’s Center for Law and Justice and ZOA Campus have each been recognized as models of support for the Jewish students who increasingly face intimidation and harassment from BDS-affiliated professors and college peers.

Recognizing the critical importance of this conference, Klein agreed to come back to Israel to share his anti-BDS insights shortly after having traveled to Israel, in May, on a very successful mission led by Florida Governor Ron DeSantis.

While in Israel, Mort Klein will meet with students from across the U.S. who are participating on ZOA Campus‘ Israel Student Leadership Mission.

Klein will also attend meetings with various top Israeli officials and immediately after the conference, Klein will head to Germany to meet with U.S. Ambassador Richard Grenell and other officials. Mort’s wife Rita will be accompanying him on both trips.

We would love to hear from you! Please fill out this form and we will get in touch with you shortly.
Trending Z
Uncategorized June 11, 2019
FLASH: ISRAEL-JORDAN PEACE TREATY (1994) GUARANTEES JEWS ACCESS TO THE TEMPLE MOUNT – LET MY PEOPLE PRAY
Uncategorized June 11, 2019
ZOA Analysis: Most American Rabbis Who Are Boycotting Some Israeli Ministers Are From Extremist Left Wing Groups (J Street; T’ruah; JVP)
Uncategorized June 11, 2019
Israel’s “Right of Return” Grandparent Clause is De-Judaizing the Jewish State – Eliminate It
Uncategorized June 11, 2019
Exclusive: ZOA Accuses Ilhan Omar of Hating the U.S. ‘as Much as Israel,’ Lauds Kevin McCarthy for ‘Throwing Her Off the HFAC’
Center for Law & Justice
We work to educate the American public and Congress about legal issues in order to advance the interests of Israel and the Jewish people.
We assist American victims of terrorism in vindicating their rights under the law, and seek to hold terrorists and sponsors of terrorism accountable for their actions.
We fight anti-Semitism and anti-Israel bias in the media and on college campuses.
We strive to enforce existing law and also to create new law in order to safeguard the rights of the Jewish people in the United States and Israel.
Our Mission
ZOA STATEMENT
The ZOA speaks out for Israel – in reports, newsletters, and other publications. In speeches in synagogues, churches, and community events, in high schools and colleges from coast to coast. In e-mail action alerts. In op-eds and letters to the editor. In radio and television appearances by ZOA leaders. Always on the front lines of pro-Israel activism, ZOA has made its mark.
Related Articles
OP-ED ZOA Praises Pres. Trump for Closing PLO/PA Office in Washington D.C.

Zionist Organization of America (ZOA) President Morton A. Klein released the following statement: The ZOA strongly praises the Trump administration and Secretary of State Mike Pompeo for today announcing that the U.S. Consulate General (which really dealt with Palestinian Arabs) in Jerusalem will be merged into a single diplomatic mission, in the beautiful new U.S. […]