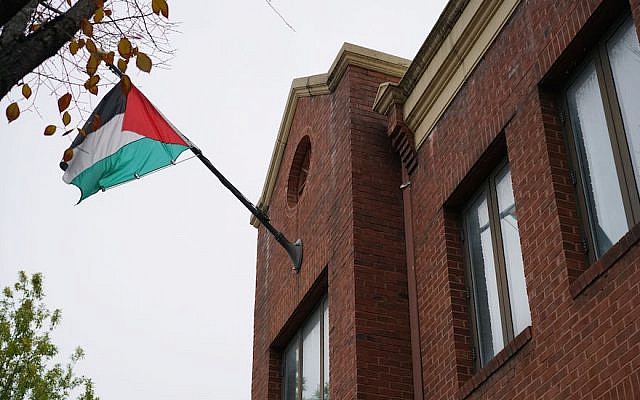 ZOA strongly praised President Trump and his administration for starting the Jewish New Year right, with the U.S. State Department’s announcement on Monday that, after careful review, the U.S. is closing the Palestine Liberation Organization (PLO)’s “General Delegation” office in Washington, DC.  The State Department explained on Monday that, in an effort to advance a comprehensive peace, the U.S. had allowed the PLO office to continue operations since the expiration in November 2017 of a previous waiver of U.S. law requiring that the PLO office be closed if the PLO/PA (Palestinian Authority) seeks International Criminal Court (ICC) investigation of Israel.  However, instead of advancing peace, the PLO/PA rejected and failed to have any negotiations with Israel; refused to engage with the U.S. government’s peace efforts; and attempted to have the ICC investigate Israel.  (See “Closure of the PLO Office in Washington,” Press Statement, U.S. State Dep’t spokesperson Heather Nauert, Sept. 10, 2018.)

The ZOA has long advocated for this long overdue action. ZOA repeatedly pleaded with the Obama and Bush administrations to close the PLO/PA offices, because they violated conditions placed on the office by behaving as a terrorist regime — by promoting hatred and violence against Jews and Israel in their schools, media, and speeches, and by naming schools, streets and sports teams after Jew-killers — all the while refusing to negotiate. And remember, since the PA is not a state, they possess no legitimate right to maintain offices in the United States.

The ZOA strongly praises President Trump and his administration for taking this important step to penalize the PLO/PA leadership for its refusals to negotiate peace, and for the PLO/PA’s abusive uses of purported legal processes to attempt to prosecute Israel for defending herself from attacks by Palestinian-Arab terrorists.  Those terrorists are paid by and incited by the PLO to murder Jews and Americans.  A lawful court would be investigating and prosecuting the PLO, Fatah, Hamas, the PFLP, Palestinian Islamic Jihad, Iran and Hezbollah – not Israel.

The Trump administration’s actions are an extremely welcome change from the actions of the previous administration.  Former President Obama upgraded the status of the PLO office – thereby rewarding the PLO/PA’s incitement and payments to terrorists to murder Jews.  (See  “ZOA Opposes Obama Upgrading Diplomatic Status Of Abbas’ P.A. – It Rewards P.A. Incitement & Refusal To Negotiate,” July 26, 2010.)

The ZOA has long advocated for this long overdue action. ZOA repeatedly pleaded with the Obama and Bush administrations to close the PLO/PA offices, because they violated conditions placed on the office by behaving as a terrorist regime — by promoting hatred and violence against Jews and Israel in their schools, media, and speeches, and by naming schools, streets and sports teams after Jew-killers — all the while refusing to negotiate.

ZOA also welcomes the Trump administration’s strong stance against the PLO/PA’s attempt to use the ICC. Under longstanding U.S. law, the U.S. will not cooperate with the ICC’s unjust investigations and prosecutions of Americans and American allies.  (See 22 U.S.C. § 7402; § 7423; and § 7432(3).) Among other things, the U.S. Congress found that the ICC does “not serve the cause of international justice,” and that “Any American prosecuted by the International Criminal Court will, under the Rome Statute, be denied procedural protections to which all Americans are entitled under the Bill of Rights to the United States Constitution, such as the right to trial by jury.”  (22 U.S.C. § 7421(4) & (7).)  Allies are likewise denied basic procedural protections at the ICC.  Congress also noted that the ICC could place officials at“risk of criminal prosecution for national security decisions involving such matters as responding to acts of terrorism, preventing the proliferation of weapons of mass destruction, and deterring aggression.”  (Id., § 7421(9).)

In his speech on Monday, Ambassador Bolton condemned the ICC’s lack of due process protections; condemned the illegitimate ICC’s danger to Americans and our allies; and stood with Israel against the PLO/PA’s nefarious efforts to instigate ICC investigations of Israel, in an attempt to constrain Israel from defending her citizens from terror attacks.  Among other things, Amb. Bolton stated:

“[T]he ICC was created as a free-wheeling global organization claiming jurisdiction over individuals without their consent. . . .

American soldiers, politicians, civil servants, private citizens, and even all of you sitting in the room today, are purportedly subject to the Court’s prosecution should a party to the Rome Statute or the Chief Prosecutor suspect you of committing a crime within a state or territory that has joined the treaty.

To protect American service members from the ICC, in 2002 Congress passed the American Service members’ Protection Act, or ASPA, . . . This law, which enjoyed broad bipartisan support, authorizes the President to use all means necessary and appropriate, including force, to shield our service members and the armed forces of our allies from ICC prosecution. It also prohibits several forms of cooperation between the United States and the Court. . . .

In November of 2017, the ICC Prosecutor requested authorization to investigate alleged war crimes committed by U.S. service members and intelligence professionals during the war in Afghanistan—an investigation neither Afghanistan nor any other State Party to the Rome Statute requested. Any day now, the ICC may announce the start of a formal investigation against these American patriots, who voluntarily went into harm’s way to protect our nation, our homes, and our families in the wake of the 9/11 attacks. . . .

Today, on the eve of September 11th, I want to deliver a clear and unambiguous message on behalf of the President of the United States. The United States will use any means necessary to protect our citizens and those of our allies from unjust prosecution by this illegitimate court.

We will let the ICC die on its own. After all, for all intents and purposes, the ICC is already dead to us.

The United States bases this policy on five principal concerns about the Court, its purported authority, and its effectiveness. . . .

Today, more than 70 nations, representing two-thirds of the world’s population, and over 70% of the world’s armed forces, are not members of the ICC.

Several African nations have recently withdrawn or threatened to withdraw their membership, citing the disproportionate number of arrest warrants against Africans. To them, the ICC is just the latest European neocolonial enterprise to infringe upon their sovereign rights.

Israel too has sharply criticized the ICC. While the Court welcomes the membership of the so-called “State of Palestine,” it has threatened Israel—a liberal, democratic nation—with investigation into its actions to defend citizens from terrorist attacks in the West Bank and Gaza. There has also been a suggestion that the ICC will investigate Israeli construction of housing projects in the West Bank.

The United States will always stand with our friend and ally, Israel. And, today, reflecting Congressional concerns with Palestinian attempts to prompt an ICC investigation of Israel, the State Department will announce the closure of the Palestine Liberation Organization office here in Washington, D.C. As President Reagan recognized in this context, the Executive has “the right to decide the kind of foreign relations, if any, the United States will maintain,” and the Trump Administration will not keep the office open when the Palestinians refuse to take steps to start direct and meaningful negotiations with Israel. The United States supports a direct and robust peace process, and we will not allow the ICC, or any other organization, to constrain Israel’s right to self-defense.

In sum, an international court so deeply divisive and so deeply flawed can have no legitimate claim to jurisdiction over the citizens of sovereign nations that have rejected its authority.

Americans can rest assured that the United States will not provide any form of legitimacy or support to this body. We will not cooperate, engage, fund, or assist the ICC in any way. This President will not allow American citizens to be prosecuted by foreign bureaucrats, and he will not allow other nations to dictate our means of self-defense.”

Israeli Prime Minister Netanyahu aptly noted:  “Israel supports American actions meant to make clear to the Palestinians that refusal to negotiate and attempts to attack Israel in international forums will not advance peace.”

We at ZOA are pleased that the administration has taken these important actions to counteract the PLO/PA’s refusal to negotiate and use illegitimate international forums to attack Israel’s right to self-defense.

We would love to hear from you! Please fill out this form and we will get in touch with you shortly.
Trending Z
Uncategorized September 12, 2018
ZOA Analysis: Most American Rabbis Who Are Boycotting Some Israeli Ministers Are From Extremist Left Wing Groups (J Street; T’ruah; JVP)
Uncategorized September 12, 2018
ZOA: Israel’s Reasonable Judicial Reform Proposals Are Good for Democracy, the Rule of Law and the Economy
Uncategorized September 12, 2018
Israel’s “Right of Return” Grandparent Clause is De-Judaizing the Jewish State – Eliminate It
News September 12, 2018
ZOA is Disappointed, Offended and Frightened by 211 U.S. House Votes Supporting Jew-Hating, Israel-Hating Rep. Ilhan Omar
Center for Law & Justice
We work to educate the American public and Congress about legal issues in order to advance the interests of Israel and the Jewish people.
We assist American victims of terrorism in vindicating their rights under the law, and seek to hold terrorists and sponsors of terrorism accountable for their actions.
We fight anti-Semitism and anti-Israel bias in the media and on college campuses.
We strive to enforce existing law and also to create new law in order to safeguard the rights of the Jewish people in the United States and Israel.
Our Mission
ZOA STATEMENT
The ZOA speaks out for Israel – in reports, newsletters, and other publications. In speeches in synagogues, churches, and community events, in high schools and colleges from coast to coast. In e-mail action alerts. In op-eds and letters to the editor. In radio and television appearances by ZOA leaders. Always on the front lines of pro-Israel activism, ZOA has made its mark.
Related Articles
OP-ED More Horrific Hagel Statements – Israelis Keep “Palestinians Caged Up Like Animals,” Iran Should Not Be Isolated, Supports Fatah/Hamas Merger