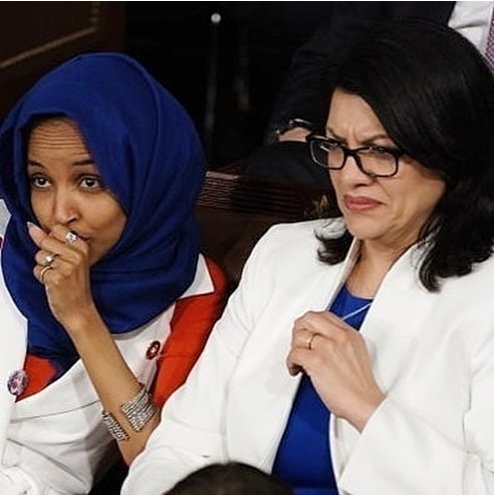 The ZOA respectfully urges AIPAC to retract its mistaken criticism of Israel’s just and proper decision to refuse to admit Jew-haters Rashida Tlaib and Ilhan Omar for their planned visit to incite hatred and boycotts against Israel, designed to destroy the Jewish state. AIPAC’s unwarranted criticism of Israel did tremendous harm to Israel and to AIPAC’s repeated declaration that they support the policies of the democratically elected government of Israel, and whose mission is supporting the U.S.-Israel relationship and the security of Israel and the United States. AIPAC’s mistaken criticism of Israel was widely quoted by the media, including major American networks and cable stations (including Fox, CNN, NBC and others); was retweeted over 6,200 times (far more than a typical AIPAC tweet); encouraged and gave a free pass to politicians to join in AIPAC’s criticism of Israel; and gave grist and succor to hostile-to-Israel groups, including J Street, to unfairly condemn Israel and Israeli officials.

AIPAC’s criticism moreover misstated the object and goals of the planned Tlaib/Omar trip. AIPAC’s July 15, 2019 tweet that “every member of Congress should be able to visit and experience our democratic ally Israel firsthand,” ignored the facts that (i) Tlaib and Omar refused to participate with their Congressional colleagues in the large Congressional mission that actually did experience Israel firsthand, and (ii) Tlaib’s and Omar’s itinerary had absolutely nothing to do with “experiencing our democratic ally Israel firsthand.”

The Tlaib/Omar itinerary included no meetings with Israeli officials, no meetings with ordinary Israelis, and no visits to Israeli sites. Tlaib and Omar didn’t even call their trip a visit to “Israel.” Instead, their itinerary touted a trip to non-existent “Palestine.” The Tlaib/Omar visit was arranged by a terror-supporting group, Miftah. Miftah has accused Jews of the antisemitic blood libel and has praised suicide bombers for murdering Jews. The itinerary was designed to defame and incite against Israel.

AIPAC’s tweet moreover ignored the necessity for Israel to follow its anti-BDS laws; the fact that Congresspersons are not above the law, and the fact that self-respecting nations do not need to admit avowed enemies that wish to destroy their people. ZOA provided examples of government officials from foreign nations and territories – including Austria’s president – whom the U.S. properly barred from admission to the U.S, and even a member of Israel’s Knesset, as well as a member of the Palestinian Parliament Hanan Ashrawi.

If there was a Congressmember who demanded that France or Italy or any other country must be boycotted and destroyed, no self-respecting lobby would condemn France or Italy for refusing admission to that member of Congress.

Additional Potential Harmful Effects of AIPAC’s Tweet: Further, although we do not believe that this was AIPAC’s intent, AIPAC’s mistaken tweet is being viewed by many as overall support for Omar and Tlaib, is being used by hostile-to-Israel groups to malign Israel, and may have emboldened Tlaib and Omar to become even more outrageous in their hatefulness.

Additional Reasons Why Israel Was Correct to Deny Tlaib and Omar Admission:  ZOA and others in the pro-Israel community and honest journalists have independently pointed out numerous reasons (in addition to those discussed above) why Israel was correct to not admit Tlaib and Omar for a visit designed to promote hatred and boycotts against the Jewish state, and Israel’s destruction.

Further, the director of the Jerusalem Center for Public Affairs’ Program to Counter Political Warfare and BDS, Dan Diker, explained that Tlaib and Omar’s planned trip was nothing short of an “act of political warfare.” Former Israeli Ambassador Alan Baker noted that the blame lies with Omar and Tlaib and pre-existing hostile-to-Israel actors, and that: “Israel, like every other country, has the sovereign prerogative to deny entry to any person.” (“Why Israeli Ban on Two US Congresswomen’s Visit Won’t Drive a Wedge Between the Countries,” Aug. 18, 2019.)

AIPAC should retract or correct its demand that Israel allow Israelophobes Rep. Ilhan Omar (D-MN) and Rashida Tlaib (D-MI) to come to Israel.

We would love to hear from you! Please fill out this form and we will get in touch with you shortly.
Trending Z
News August 20, 2019
ZOA Condemns U.S. State Dept. & U.S. Amb. Nides For Siding with Antisemitic, Discriminatory Palestinian & Hamas Terrorists re: the Temple Mount, Violating Jews’ Religious Freedom
Uncategorized August 20, 2019
FLASH: ISRAEL-JORDAN PEACE TREATY (1994) GUARANTEES JEWS ACCESS TO THE TEMPLE MOUNT – LET MY PEOPLE PRAY
Uncategorized August 20, 2019
ZOA Analysis: Most American Rabbis Who Are Boycotting Some Israeli Ministers Are From Extremist Left Wing Groups (J Street; T’ruah; JVP)
Uncategorized August 20, 2019
Israel’s “Right of Return” Grandparent Clause is De-Judaizing the Jewish State – Eliminate It
Center for Law & Justice
We work to educate the American public and Congress about legal issues in order to advance the interests of Israel and the Jewish people.
We assist American victims of terrorism in vindicating their rights under the law, and seek to hold terrorists and sponsors of terrorism accountable for their actions.
We fight anti-Semitism and anti-Israel bias in the media and on college campuses.
We strive to enforce existing law and also to create new law in order to safeguard the rights of the Jewish people in the United States and Israel.
Our Mission
ZOA STATEMENT
The ZOA speaks out for Israel – in reports, newsletters, and other publications. In speeches in synagogues, churches, and community events, in high schools and colleges from coast to coast. In e-mail action alerts. In op-eds and letters to the editor. In radio and television appearances by ZOA leaders. Always on the front lines of pro-Israel activism, ZOA has made its mark.
Related Articles
OP-ED BY: Morton A. Klein, ZOA President, follow on twitter @mortonaklein7 and at ZOA.org ZOA’s Mort Klein Book Review: Geraldo Rivera Writes Anti-Israel Book – Fox Should Fire Him | Breitbart

Geraldo’s recent second memoir, The Geraldo Show: A Memoir, is another horror show. He calls Israel the “Unholy Land”; describes himself as a “Palestinianist”; falsely twists the PLO/Hamas/Islamic Jihad hostage-taking and seizure of the Church of the Nativity into an “Israeli siege”; and calls his own cowardly, false attacks on Jews and Israel “courageous.” On March 30, […]