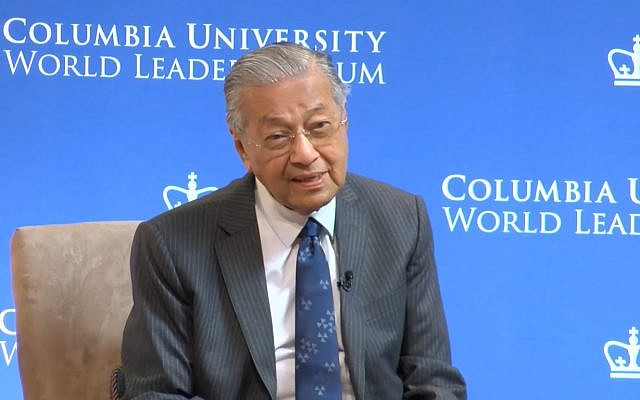 The Zionist Organization of America (ZOA) has condemned Columbia University for inviting anti-Semitic Israelophobic Malaysian Prime Minister Dr. Mahathir Mohamad to address the University’s World Leaders Forum this week. (Other enemies of the Jewish people, like Iran’s former president Mahmoud Ahmadinejad, have been welcomed by Columbia, giving it the perverse distinction of being a pioneer in the Western hemisphere in seeking out and honoring vicious anti-Semitic leaders).

In his remarks on Wednesday at Columbia, Dr. Mahathir resorted to repeating numerous of his earlier statements and positions on Jews: he used insulting anti-Jewish language, calling Jews “hook-nosed”; insisted that Jews “rule the world by proxy”; questioned the number of Jews murdered in the Holocaust; conflated his right to free speech with immunity from criticism when criticized for vicious Jew-hating statements. Dr. Mahathir also proclaimed that he is “glad to be labeled anti-Semitic.”

As a Times of Israel report observed, “In response to a question by a student who identified herself as a member of a campus pro-Israel group, Mohamad denied questioning how many Jews were killed in the Holocaust, but then went on to do so. ‘Well, I have not disputed them, but I have said that “Who determined these numbers?” If it is somebody who is in favor, you get one figure, if somebody who is against, you get another figure,’ he said.”

The ZOA has strongly criticized Dr. Mahathir’s statements on several previous occasions, in which he frequently compares Israel to the Nazis makes offensive stereotypical statements about Jews, ad nauseaum.

“By inviting Mahathir to address the University’s forum this week, Columbia granted a podium and, no less worrying, bestowed an aura of respectability, upon a Jew-baiting, Israel-hating anti-Semite.”

ZOA National President Morton A. Klein said, “We are appalled and disgusted that Columbia University has repeated its terrible mistake of inviting Holocaust denying anti-Semites, like Iran’s Mahmoud Ahmadinejad, to address its prestigious forums. Although criticized widely at the time, Columbia seems to have learnt nothing from the invitation it extended to Ahmadinejad.

“By inviting Mahathir to address the University’s forum this week, Columbia granted a podium and, no less worrying, bestowed an aura of respectability, upon a Jew-baiting, Israel-hating anti-Semite.

“Worse, by enabling Mahathir’s reiteration of his repeated anti-Semitic claims, Columbia has permitted the impression to form that Mahathir’s Holocaust minimization and comparisons of Israel and Zionism to Hitler and Nazi Germany are reasonable points of view for debate and discussion.

“Are David Dukes’ racist views on African- Americans reasonable subjects for debate at Columbia University? Of course not. Yet Columbia lost little time in inviting Mahathir to speak.

“It is as if Columbia could hardly wait to extend an invitation to Dr. Mahathir, who only recently last year returned to office as prime minister.

“Columbia’s donors and alumni, who might once have understandably felt inclined to bestow gifts upon the university that once gave them a superb education, should cease writing checks to Columbia University until it apologizes for its conduct and comprehensively stops enabling Jew-haters and advocates of Israel’s destruction.”

We would love to hear from you! Please fill out this form and we will get in touch with you shortly.
Trending Z
Uncategorized September 27, 2019
ZOA Analysis: Most American Rabbis Who Are Boycotting Some Israeli Ministers Are From Extremist Left Wing Groups (J Street; T’ruah; JVP)
Uncategorized September 27, 2019
ZOA: Israel’s Reasonable Judicial Reform Proposals Are Good for Democracy, the Rule of Law and the Economy
Uncategorized September 27, 2019
Israel’s “Right of Return” Grandparent Clause is De-Judaizing the Jewish State – Eliminate It
News September 27, 2019
ZOA is Disappointed, Offended and Frightened by 211 U.S. House Votes Supporting Jew-Hating, Israel-Hating Rep. Ilhan Omar
Center for Law & Justice
We work to educate the American public and Congress about legal issues in order to advance the interests of Israel and the Jewish people.
We assist American victims of terrorism in vindicating their rights under the law, and seek to hold terrorists and sponsors of terrorism accountable for their actions.
We fight anti-Semitism and anti-Israel bias in the media and on college campuses.
We strive to enforce existing law and also to create new law in order to safeguard the rights of the Jewish people in the United States and Israel.
Our Mission
ZOA STATEMENT
The ZOA speaks out for Israel – in reports, newsletters, and other publications. In speeches in synagogues, churches, and community events, in high schools and colleges from coast to coast. In e-mail action alerts. In op-eds and letters to the editor. In radio and television appearances by ZOA leaders. Always on the front lines of pro-Israel activism, ZOA has made its mark.
Related Articles
OP-ED ZOA Praises ADL, AJC Call For Further Review of Hagel’s Record – AIPAC & Others Silent