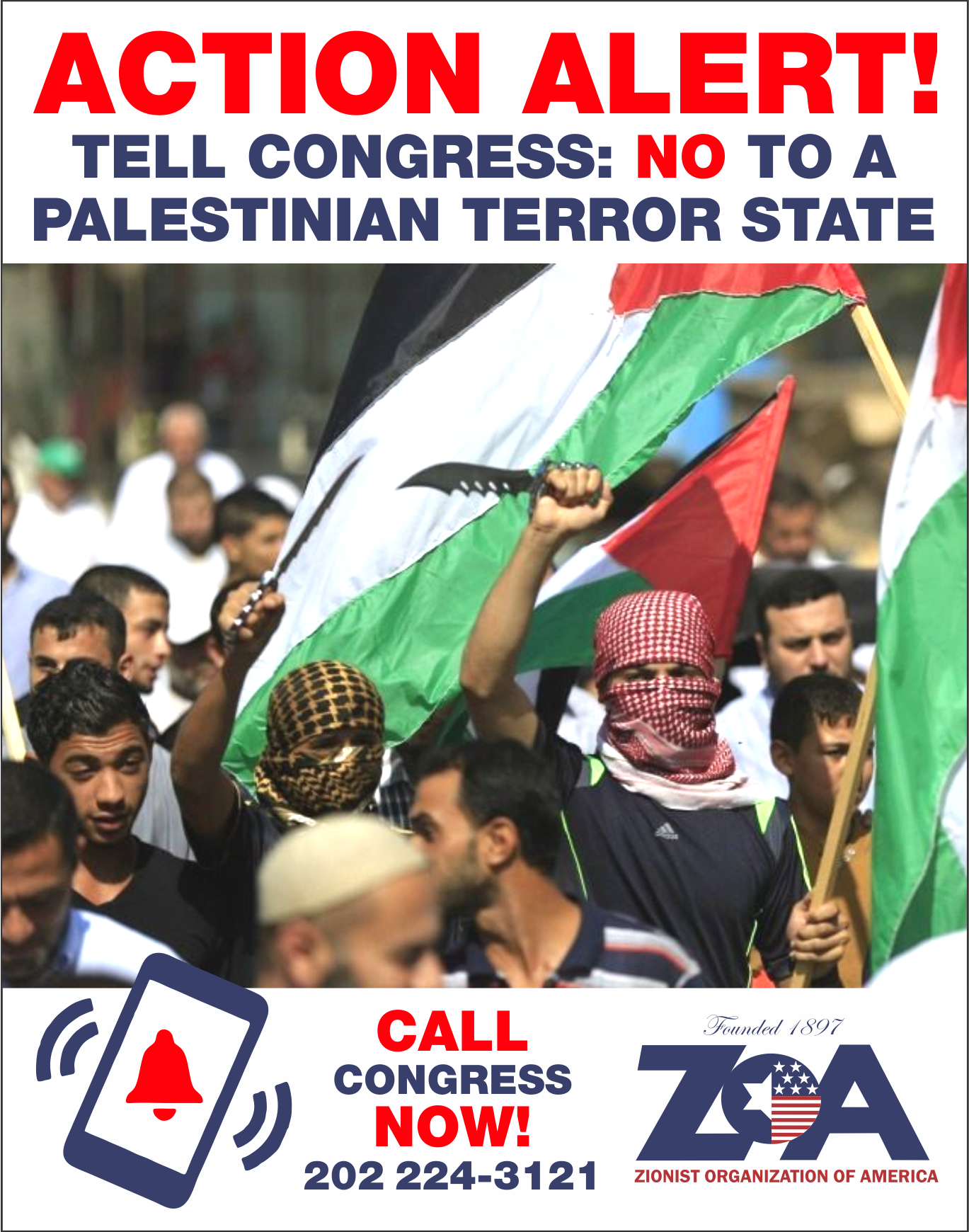 Please Call Your House Members to Urge Them to Vote “No” This Week Against H. Res. 326, a Resolution That Calls for a New Palestinian Arab State, Which Will Be Hamas/Iran Terror State

Please call your U.S. House Members today (or as soon as you can) at 202 224-3121 and urge him/her to reject H.Res. 326, a J Street-inspired House resolution calling for a so-called “two-state” solution, which would establish a new Arab terror state on Israel’s border.

Please also share this with your friends and ask them to call!

The House of Representatives is scheduled to vote this Friday (Friday, December 6th) on resolution H. Res. 326, calling for a new Arab terrorist state on Israel’s border on historically Jewish land.

There is no Palestinian partner for peace, yet some in Congress want to reward the Palestinian Arabs with a state of their own.

When Israel completely evacuated Gaza, it was seized by the radical terrorist group, Hamas. This resulted in Gaza’s civilian population being held hostage as human shields by Hamas while the Islamic extremist group has launched thousands of missiles and mortar shells at Israeli civilian targets, a war crime.

Hamas places its weapons under schools and medical facilities hoping Israel will attack them.

Hamas has misappropriated billions of dollars in humanitarian aid to Gaza to building weapons and terror attack tunnels into Israel.

What happened in Gaza is likely to be repeated in all of the proposed new Palestinian Arab state. Once established, it will be a new launching pad for the Arab terror war on Israel.

The other Palestinian Arab faction, Fatah, has the same goal as Hamas, to completely destroy Israel “from the river to the sea.”

The Fatah-dominated Palestinian Authority continues to incite the murder and wounding of Israelis and pays rewards to the terrorists and their families that carry out this terrorism.

The Palestinian Authority denies any Jewish historical connection to Israel and teaches it children to hate and murder Jews. It even erases Israel from its maps. They have not lived up to their obligations under the Oslo accords or any of the agreements they have signed.

The Palestinian Arabs have rejected any peace talks with Israel and refuse to discuss peace with the United States. After two inconclusive Israeli elections and the prospects growing for a third, it is completely inappropriate for the U.S. House of Representatives to try to interfere with Israeli policy as Israel tries to form a new government. (For more information, please see this article by ZOA National President President Morton Klein.

Your calls are very important! Thank you for taking the time to call your House Member and for all your help and dedication!

We would love to hear from you! Please fill out this form and we will get in touch with you shortly.
Trending Z
News December 4, 2019
ZOA Condemns U.S. State Dept. & U.S. Amb. Nides For Siding with Antisemitic, Discriminatory Palestinian & Hamas Terrorists re: the Temple Mount, Violating Jews’ Religious Freedom
Uncategorized December 4, 2019
FLASH: ISRAEL-JORDAN PEACE TREATY (1994) GUARANTEES JEWS ACCESS TO THE TEMPLE MOUNT – LET MY PEOPLE PRAY
Uncategorized December 4, 2019
ZOA Analysis: Most American Rabbis Who Are Boycotting Some Israeli Ministers Are From Extremist Left Wing Groups (J Street; T’ruah; JVP)
Uncategorized December 4, 2019
Israel’s “Right of Return” Grandparent Clause is De-Judaizing the Jewish State – Eliminate It
Center for Law & Justice
We work to educate the American public and Congress about legal issues in order to advance the interests of Israel and the Jewish people.
We assist American victims of terrorism in vindicating their rights under the law, and seek to hold terrorists and sponsors of terrorism accountable for their actions.
We fight anti-Semitism and anti-Israel bias in the media and on college campuses.
We strive to enforce existing law and also to create new law in order to safeguard the rights of the Jewish people in the United States and Israel.
Our Mission
ZOA STATEMENT
The ZOA speaks out for Israel – in reports, newsletters, and other publications. In speeches in synagogues, churches, and community events, in high schools and colleges from coast to coast. In e-mail action alerts. In op-eds and letters to the editor. In radio and television appearances by ZOA leaders. Always on the front lines of pro-Israel activism, ZOA has made its mark.
Related Articles
OP-ED ZOA’s Mort Klein, Bill Kristol at Huckabee Rally for Israel, D.C, Sunday, 2 PM
OP-ED Action Alert: Call Your Representative and Urge Them To Remove Anti-Semitic Omar from the House Foreign Affairs Committee