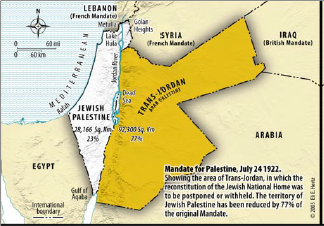 The so-called “two-state solution” is not the key to peace – either in Israel or in the greater Middle East.  The misnomer “two-state solution” really means creating a Palestinian-Arab terror state on historic Jewish lands – lands legally designated under internationally binding treaties for reconstituting the Jewish homeland and for close Jewish settlement.  (See “There Is No Israeli ‘Occupation’: It’s Not Arab Land,” by Morton Klein, Breitbart, Sept. 29, 2018.) Such a Palestinian-Arab state will be an America-hating, Jew-hating base of terrorist operations for Iran and a cabal of Iranian-supported designated Palestinian-Arab foreign terror organizations – including Hamas and the PFLP – as well as terrorism-inciter Fatah. Whatever remains of Israel – including Israel’s major population centers and airport – will be subjected to rocket and terror attacks at hitherto unprecedented levels.

The “two-state solution” concept misunderstands the fundamental nature of the Palestinian-Arab-Iranian-Hamas-Fatah Islamist war against Israel.  It’s a religious war. It’s not about borders. The Palestinian Arabs rejected generous statehood offers in 1937, 1947, 2000, 2001, 2008, and 2014. They won’t accept a State with the condition of accepting the Jewish state and ending their demand to bring millions of phony Arab “refugees” into Israel effectively ending it as a Jewish state.

It’s also not about “equal rights.”  Arabs living in Israel already enjoy equal rights.  It’s about destroying the Jewish state’s very existence.   A Palestinian-Arab state would be on Israel’s longest border dedicated to murdering Jews and Israel’s destruction, and would employ all the tools, weapons, rights to enter into terror alliances and lands obtained via statehood, to carry out its hateful goals.

In 1993, Arafat told us what any “peace deal” really means. Immediately after the Oslo Accords, Arafat announced that the accords were merely part of the PLO’s 1974 “stages plan”: namely, first establish the PA on whatever territory the PLO can obtain inside Israeli territory, and then use that beachhead to attack and destroy all of Israel.  Arafat and other PLO officials promptly made over 100 statements during the four years following the Oslo Accords promoting the destruction of Israel, and enmity and terror against the Jewish state.  Such official PA statements have continued to this day.  Abbas called for a “war for Allah” against Israel and repeatedly broadcasts calls to spill blood for Allah to stop Jews’ and Christians’ “filthy feet.”

The Palestinian Arabs rejected generous statehood offers in 1937, 1947, 2000, 2001, 2008, and 2014. They won’t accept a State with the condition of accepting the Jewish state and ending their demand to bring millions of phony Arab “refugees” into Israel effectively ending it as a Jewish state.

The Middle East’s multiple conflicts have nothing to do with Israel and the Palestinian Arabs.  Even if an Israeli-Palestinian Arab deal is reached, Iran will still violently pursue hegemony throughout the Middle East; fund terror proxies; oppress the Iranian people; chant “death to America”; enhance its missile capabilities; create havoc in Yemen, Iraq, and Syria; and endanger Saudi Arabia and other gulf states – promoting terrorism in South America, Europe, America and elsewhere.  In fact, those trying to contain Iran will be worse off, because Iran will attain another base of operations in the eastern portion of Israel.  Al Qaeda and its offshoots will still operate.  Syria’s chemical weapons and attacks on its own people won’t suddenly disappear. Lebanese Christians will still suffer at the hands of Hezbollah.  The Muslim Brotherhood will still operate in Egypt, attacking Coptic churches and government targets.  Turkey, Iraq and Iran will continue attacking our allies, the Kurds.  The 1400-year-old Shia-Sunni conflict, source of multiple wars, will still exist, and won’t be even an inch closer to resolving.

A “Palestinian-Arab state” deal would also harm American interests. Israel is America’s most loyal and valuable ally in the Middle East.  That alliance will only continue to be of utmost value to the United States if Israel is strong.  It thus behooves the United States to do what it can to strengthen Israel – for instance, by recognizing Israel’s sovereignty over the Golan Heights, the Jordan Valley, and the entirety of Jerusalem, and to be willing to recognize Israeli annexation of area C of Judea/Samaria, the right of Jews to live in Judea/Samaria and other steps that Israel could take to strengthen herself.  It would be against America’s interest to weaken Israel with a deal that concedes territory or a state to the PA.

A “Palestinian-Arab state” deal would ignore the lessons of Oslo and the lessons of other Israeli concessions.  The Oslo concessions and turnover of territory to the PLO resulted in massive terror attacks by Palestinian-Arab terrorists, who caused thousands of Israeli civilian deaths and injuries.  (See, e.g., “Lessons of 25 Year Oslo Disaster,” by Morton Klein, Jewish Press, ZOA, Sept. 13, 2018.)  Israel’s Lebanon withdrawal resulted in Hezbollah seizing control of Lebanon, persecution of Lebanese Christians, war, and rocket attacks and enormous dangers to northern Israel from Hezbollah’s arsenal of 150,000 rockets pointed at Israel.  The Hebron accord resulted in increased Palestinian-Arab terrorist attacks on Hebron’s innocent Jewish citizens and even babies. Israel’s lifting of checkpoints resulted in murders of innocent Israeli civilians, including beloved Rabbi Meir Chai – a father of seven.  The Gaza withdrawal disaster resulted in four wars, thousands of Hamas terror rockets, terror tunnels, and arson terror kites aimed at Israeli civilians and lands.

As PM Netanyahu succinctly stated in the NY Times in March 2018 that a Palestinian state “doesn’t work . . . When we leave land terror organizations take over. Immediately.”

PA President Mahmoud Abbas demonstrated his enmity when he publicly cursed President Trump and the entire Trump family with Arabic culture’s most vitriolic curses.  Abbas also reiterated that he “completely rejects” President Trump’s call for him to cease paying salaries to blood-soaked, jailed Palestinian Arab terrorists and stipends to the families of dead Palestinian Arabs terrorists, and said “one thousand times no” to any U.S.-peace deal without even seeing it.  Abbas also verbally attacked  and insulted U.S. Ambassador to the UN Nikki Haley and U.S. Ambassador to Israel David Friedman.

A “Palestinian-Arab state” deal would mean that even more innocent Americans will be murdered by Palestinian-Arab terrorists.  U.S. Army veteran Taylor Force, 13-year-old Hallel Yaffa Ariel, and dozens of other Americans have been stabbed to death and murdered by suicide bombs and other means by Palestinian-Arab terrorists – and the Palestinian Authority financially rewards those terrorists.  The Palestinian-Arab murderer of American-Israeli Ari Fuld specifically targeted Americans to murder.  (“Witness Says Ari Fuld’s Killer Deliberately Targeted an American: Falafel shop worker tells Times of Israel that terrorist twice asked her and others in restaurant if they spoke English and stood behind Fuld for a full minute before stabbing him,” by Jacob Magid, Sept. 21, 2018.)

ZOA is enormously grateful to President Trump for all of his important pro-Israel actions.  President Trump is the most pro-Israel U.S. president in history.  He scrapped the disastrous Iran deal; supports Israel’s right to defend herself; defends Israel at the United Nations and regarding the ICC; closed the PLO’s Washington office; cut U.S. taxpayer funding to the PA, the anti Israel UN Human Rights Council and UNRWA (which uses the funds to teach hatred of Jews and stockpile Hamas rockets); and moved the U.S. Embassy to Israel’s capital Jerusalem, in compliance with the Jerusalem Embassy Act of 1995.  The U.S. embassy is located in every other nation’s designated capital; the move ended decades of unfair discrimination against Israel.  As President Trump beautifully stated during his United Nations speech this week: “In recognition of every sovereign state to determine its own capital, I moved the U.S. Embassy in Israel to Jerusalem.”

However, moving the embassy to comply with U.S. law and end unfair discrimination against Israel should not be considered a “chip” that warrants having Israel cede territory, sovereignty or other concessions to a terrorist state that would endanger Israeli and American citizens, and harm Israeli and American interests.

It should also be noted that “one state” and “two state” are not the only options.  Former Israeli Prime Minister Yitzchak Rabin told the Israeli Knesset that the final status envisioned by Oslo was a Palestinian entity that was “less than a state.”  Other creative “solutions” have also been proposed by others.

And of course, a major impediment to any peace deal has also always been the long, continuing history of Palestinian Authority’s failure to abide its existing commitments.  How can anyone make a deal with a party that will not keep whatever deal is made?  One cannot make peace with the PA when PA President Mahmoud Abbas repeatedly-broadcasts calls to the Palestinian-Arab public to “spill blood” to prevent Jews’ and Christians’ “filthy feet” from “defiling” Jerusalem, and continues to pay $400 million per year to terrorists to murder Jews.

No one should even consider any sort of deal unless the Palestinian Authority keeps – for a significant period of time – its obligations to:

• stop promoting violence and hatred against Jews and Israel in its schools, media, and speeches and social media and instead start teaching peaceful coexistence;

• cooperate with Israel economically – including by ending all BDS efforts

• remove all terrorists and terrorist groups (including Hamas and the PFLP) from the PA government.

•accept Israel as a Jewish State

•end demand for so called Arab “refugees” to move into Israel

•agree to end any further claims

One can only make peace with a party that really demonstrates that it wants peace.  Let’s demand that the Palestinian Authority do just that before any deal is proposed.

We would love to hear from you! Please fill out this form and we will get in touch with you shortly.
Trending Z
Uncategorized September 28, 2018
FLASH: ISRAEL-JORDAN PEACE TREATY (1994) GUARANTEES JEWS ACCESS TO THE TEMPLE MOUNT – LET MY PEOPLE PRAY
Uncategorized September 28, 2018
ZOA Analysis: Most American Rabbis Who Are Boycotting Some Israeli Ministers Are From Extremist Left Wing Groups (J Street; T’ruah; JVP)
Uncategorized September 28, 2018
Israel’s “Right of Return” Grandparent Clause is De-Judaizing the Jewish State – Eliminate It
Uncategorized September 28, 2018
Exclusive: ZOA Accuses Ilhan Omar of Hating the U.S. ‘as Much as Israel,’ Lauds Kevin McCarthy for ‘Throwing Her Off the HFAC’
Center for Law & Justice
We work to educate the American public and Congress about legal issues in order to advance the interests of Israel and the Jewish people.
We assist American victims of terrorism in vindicating their rights under the law, and seek to hold terrorists and sponsors of terrorism accountable for their actions.
We fight anti-Semitism and anti-Israel bias in the media and on college campuses.
We strive to enforce existing law and also to create new law in order to safeguard the rights of the Jewish people in the United States and Israel.
Our Mission
ZOA STATEMENT
The ZOA speaks out for Israel – in reports, newsletters, and other publications. In speeches in synagogues, churches, and community events, in high schools and colleges from coast to coast. In e-mail action alerts. In op-eds and letters to the editor. In radio and television appearances by ZOA leaders. Always on the front lines of pro-Israel activism, ZOA has made its mark.
Related Articles
OP-ED ZOA: Why Are We Funding a PA Terror Regime Which Is Also A Police State?