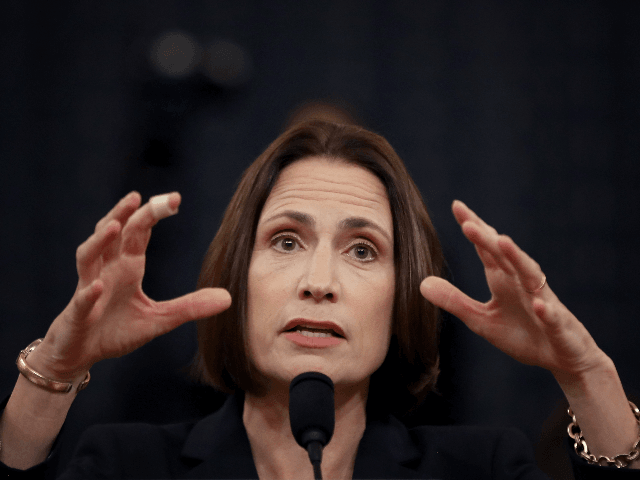 The Zionist Organization of America (ZOA) has condemned Fiona Hill, the former Director for European and Russian Affairs in the Trump Administration, for agreeing with her questioner, Rep. Raja Krishnamoorthi (D-IL) during the U.S. House impeachment hearings last week that “conspiracy theories … have been targeting you, spun in part by folks like Mr. Stone as well as fueled by Rudy Giuliani and others, basically have a tinge of anti-Semitism to them at least?”

Ms. Hill replied, “Well, certainly when they involve George Soros, they do. I’d just like to point out that in the early 1900s, the czarist secret police produced something called The Protocols of the Elders of Zion, which, actually, you can still obtain on the internet. And you can buy it, actually, sometimes, at bookshops in Russia and elsewhere. This is the longest-running anti-Semitic trope that we have in history. And the trope against Mr. Soros, George Soros, was also created for political purposes, and this is the new ‘Protocols of the Elders of Zion’” (Dennis Prager, ‘Trump Turncoat Fiona Hill Should Be Condemned by Jewish Groups. She Won’t Be,’ Jewish World Review, November 26, 2019).

ZOA National President Morton A. Klein and ZOA Chairman Mark Levenson said, “Ms. Hill’s comparison of the things that have sometimes been said about George Soros with the Protocols of the Elders of Zion is one of the most absurd, fanciful and historically illiterate things that could be said by a high government official.

“The Protocols of the Elders of Zion was perhaps the most damaging anti-Semitic forgery in all history. Forged by the Tsarist secret police at the end of the nineteenth century, the Protocols purported to be the minutes of a secret meeting of Jewish tribal elders held in the Prague Jewish cemetery in which they outlined a comprehensive plot to divide and conquer the gentile world using every from of criminality, corruption and lies.

“Millions believed in the veracity of the Protocols, even after it was exposed as a forgery in two famous trials in Switzerland and South Africa.

“Indeed, there are millions today who still believe the Protocols to be the unvarnished truth about a worldwide Jewish conspiracy to rule the world.

“How such a document that motivated and energized anti-Semites the world over, including the Nazis, can be compared to criticism of George Soros is rIdiculous.  George Soros is a radical extremist anti Israel billionaire and speculator whose activities have fanned opposition in many countries. He funds many anti Israel NGO’s,openly states he’s not a Zionist and has even said 1944,when millions of Jews were murdered was the “happiest year of my life.”

“It might well be the case that, in some cases, the things said about George Soros –– a Jew, though a thoroughly assimilated one who does not identify either with the Jewish community or the state of Israel, which he loathes and has publicly compared to the Nazis –– have been tinged with anti-Semitism, but to assert that criticism of George Soros cannot be voiced because it is anti-Semitic to be critical of him is an intellectually dishonest and absurd argument.

“Or, as Dennis Prager has put it, ‘The Protocols are a lie, and their sole intent was to create anti-Semitism. Criticism of Soros is rarely a lie, and its intent is rarely to create anti-Semitism. George Soros is a billionaire whose Open Society Foundations, with offices in 70 countries, is the world’s major funder of left-wing causes. If Soros were to come from a Lutheran or Catholic family, there would be no less criticism of him. While it is always possible that some people attack Soros solely because he was born into a Jewish family … there are few such people.’

“In this context, it is worth noting that Fiona Hill was a member of the board of Soros’ Open Society Institute from 2000 to 2006. She is far from being an objective source of information on George Soros.

“Fiona Hill is doing what so many leftists do –– trying to immunize themselves from criticism by playing the victim card. But George Soros is no victim.

We would love to hear from you! Please fill out this form and we will get in touch with you shortly.
Trending Z
News December 5, 2019
ZOA Deplores that Pres. Trump Dined with Jew-Haters Kanye West & Nick Fuentes, and Demands he Condemn Them
Uncategorized December 5, 2019
ZOA Honors Trump With Rarely Given Herzl Award for His Great Pro-Israel Work – Joins Ranks of Balfour, Truman, Begin, Meir, Ben-Gurion
News December 5, 2019
ZOA Responds to Questions About Pres. Trump, Kanye West, Fuentes, etc. Issue
Uncategorized December 5, 2019
Zionist Organization of America Honors Donald Trump for Support for Israel, Jewish Community
Center for Law & Justice
We work to educate the American public and Congress about legal issues in order to advance the interests of Israel and the Jewish people.
We assist American victims of terrorism in vindicating their rights under the law, and seek to hold terrorists and sponsors of terrorism accountable for their actions.
We fight anti-Semitism and anti-Israel bias in the media and on college campuses.
We strive to enforce existing law and also to create new law in order to safeguard the rights of the Jewish people in the United States and Israel.
Our Mission
ZOA STATEMENT
The ZOA speaks out for Israel – in reports, newsletters, and other publications. In speeches in synagogues, churches, and community events, in high schools and colleges from coast to coast. In e-mail action alerts. In op-eds and letters to the editor. In radio and television appearances by ZOA leaders. Always on the front lines of pro-Israel activism, ZOA has made its mark.
Related Articles
OP-ED BY: ZOA Staff New Poll: Americans By 2-To-1 Margin Blame Palestinians For Talks’ Failure