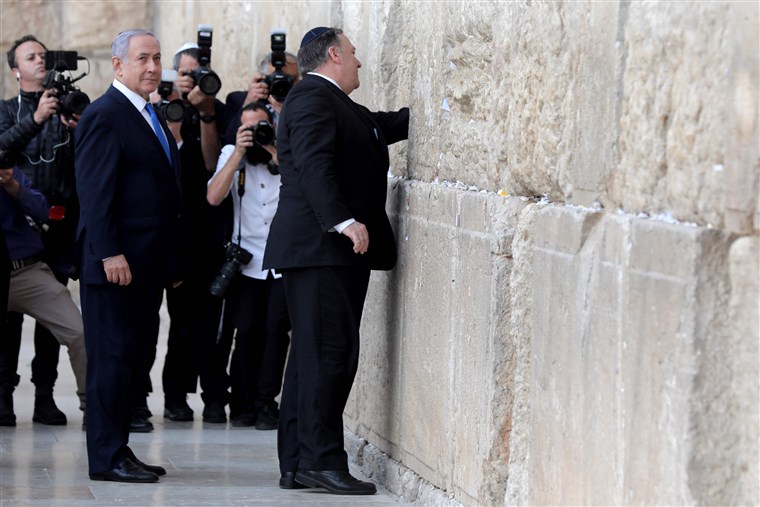 The ZOA praises Secretary of State Mike Pompeo for his statement at this morning’s press briefing confirming that Israel’s exercise of sovereignty over the historic and lawful Jewish lands of Judea-Samaria is an Israel decision.  Secretary Pompeo stated:

“We’re happy with a new [Israeli] government formed.  A fourth [election] we think wouldn’t have been Israel’s their best interest, but we’ll leave that to them.  We think it’s not in the world’s best interest. We’re glad there’s now a fully formed government in Israel.  As for the annexation in the West Bank, the Israelis will ultimately make those decisions.  That’s an Israeli decision.  We will work closely with them to share with them our views of this in a private setting.”  (See Pompeo briefing video, at minute 20:05.)

Israel indeed has had the right to exercise sovereignty over Judea-Samaria (sometimes referred to by the Jordanian name “West Bank”).  Judea and Samaria are the heart of the historic Jewish kingdoms, faith and history.  These areas were moreover guaranteed to the Jewish people for the reestablishment of the Jewish homeland, under binding international law, including the San Remo resolution, the Mandate, the Anglo-American Convention, and the UN Charter.  Israel should have exercised sovereignty over these areas decades ago.  The strategic hills of Judea-Samaria are also essential to Israel’s security.  Without these areas, Israel’s major cities and airport would be in close firing range of Arab terrorist rockets.

Israel’s prompt exercise of her sovereignty rights is moreover widely supported by Jews throughout the world.  Last October, the World Zionist Congress – the parliament of the Jewish people – passed a resolution (res. 5.3, proposed by World Likud – ZOA Coalition), with a significant majority of the vote, “call[ing] upon the Israel Government to apply Israeli sovereignty to the Jordan Valley, and to also promote settlement in these areas.”

It is critical for Israel to exercise her sovereign rights to Judea-Samaria promptly, during a U.S. administration that, as Secretary Pompeo affirmed today, understands that this is an Israeli decision.  Further delay would risk Israel having to deal with a new administration that opposes and interferes with Israel’s rights and security.

We would love to hear from you! Please fill out this form and we will get in touch with you shortly.
Trending Stories
News April 22, 2020
Let Self-Haters Ben Cohen and Jerry Greenfield Choke on Their Woke – Israel National News
Action Alerts April 22, 2020
Zionist Organization of America (ZOA) Action Alert: Boycott Ben & Jerry’s Ice Cream & Products for Boycotting Israel
News April 22, 2020
ZOA Documents Years of Antisemitism at Fairfax, VA Public Schools – Demands Corrective Measures to Protect Jewish Students
Action Alerts April 22, 2020
ZOA ACTION ALERT: Israel In Danger: Zionist Organization of America Members and Others Please Take Action
Our Mission
ZOA STATEMENT
The ZOA speaks out for Israel – in reports, newsletters, and other publications. In speeches in synagogues, churches, and community events, in high schools and colleges from coast to coast. In e-mail action alerts. In op-eds and letters to the editor. In radio and television appearances by ZOA leaders. Always on the front lines of pro-Israel activism, ZOA has made its mark.
Center for Law & Justice
We work to educate the American public and Congress about legal issues in order to advance the interests of Israel and the Jewish people.
We assist American victims of terrorism in vindicating their rights under the law, and seek to hold terrorists and sponsors of terrorism accountable for their actions.
We fight anti-Semitism and anti-Israel bias in the media and on college campuses.
We strive to enforce existing law and also to create new law in order to safeguard the rights of the Jewish people in the United States and Israel.
Related Articles
OP-ED ADL Speech to J St. Wrongly Casts “Equal” Blame on Israel, Promotes Pro-BDS “Black Lives Matter”

The Zionist Organization of America (ZOA) has deplored recent developments in Chile, in which the Chilean Jewish community finds itself under attack for supporting Israel. Chile, a country with large number of groups from other countries, has a Jewish population of about 20,000. It also has a Palestinian Arab community of about 400,000, which is […]