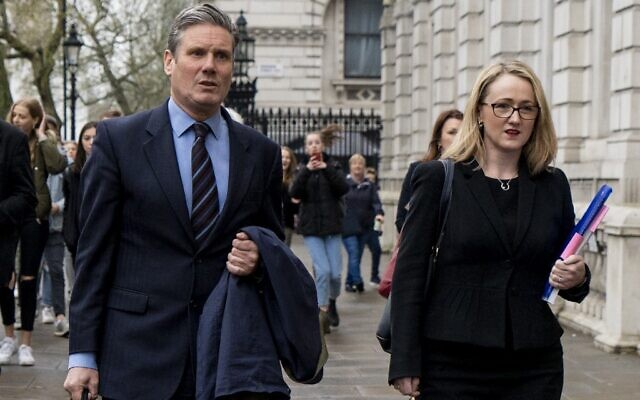 The Zionist Organization of America (ZOA) strongly praised Sir Keir Starmer, leader of Great Britain’s Labour Party, for his principled action in removing a party official from her position after she posted on social media a vile false accusation against Israel with regard to police brutality.

Starmer removed Rebecca Long-Bailey from her role as the opposition party’s “shadow secretary of education” after Long-Bailey posted a link to an article by British actress Maxine Peake falsely accusing Israel of teaching American law enforcement officers the tactic of pressing their knee on a suspect’s neck – the manner in which American George Floyd was killed by a Minneapolis police officer on May 25. Peake’s article was generally deemed as anti-Semitic.

Peake reportedly wrote in the article: “The tactics used by the police in America, kneeling on George Floyd’s neck, that was learnt from seminars with Israeli secret services.” Israeli officials have strongly denied the false allegations.

Long-Bailey was an ally of disgraced former Labour Party Leader Jeremy Corbyn, who had a long record of Jew-hatred and anti-Israel actions and statements.

Along with posting Peake’s article, Long-Bailey wrote that Peake is an “absolute diamond.”

Upon being elected leader of the Labour Party in April, Starmer said: “Anti-Semitism has been a stain on our party. I have seen the grief that it’s brought to so many Jewish communities. On behalf of the Labour Party, I am sorry. And I will tear out this poison by its roots.”

For the sake of Great Britain’s Jewish community and for the sake of everything that decent and righteous, ZOA is deeply appreciative and proud that Sir Starmer is fulfilling his moral commitment.

We would love to hear from you! Please fill out this form and we will get in touch with you shortly.
Trending Z
News June 25, 2020
ZOA Condemns U.S. State Dept. & U.S. Amb. Nides For Siding with Antisemitic, Discriminatory Palestinian & Hamas Terrorists re: the Temple Mount, Violating Jews’ Religious Freedom
News June 25, 2020
ZOA’s Klein JPost Op-Ed: There is Nothing Extreme About Israel’s New Government
Uncategorized June 25, 2020
FLASH: ISRAEL-JORDAN PEACE TREATY (1994) GUARANTEES JEWS ACCESS TO THE TEMPLE MOUNT – LET MY PEOPLE PRAY
Uncategorized June 25, 2020
ZOA Analysis: Most American Rabbis Who Are Boycotting Some Israeli Ministers Are From Extremist Left Wing Groups (J Street; T’ruah; JVP)
Center for Law & Justice
We work to educate the American public and Congress about legal issues in order to advance the interests of Israel and the Jewish people.
We assist American victims of terrorism in vindicating their rights under the law, and seek to hold terrorists and sponsors of terrorism accountable for their actions.
We fight anti-Semitism and anti-Israel bias in the media and on college campuses.
We strive to enforce existing law and also to create new law in order to safeguard the rights of the Jewish people in the United States and Israel.
Our Mission
ZOA STATEMENT
The ZOA speaks out for Israel – in reports, newsletters, and other publications. In speeches in synagogues, churches, and community events, in high schools and colleges from coast to coast. In e-mail action alerts. In op-eds and letters to the editor. In radio and television appearances by ZOA leaders. Always on the front lines of pro-Israel activism, ZOA has made its mark.
Related Articles
OP-ED Fmr. PLO Spokesman Khalidi Repeats Shop-Worn Palestinian Lies In New York Times