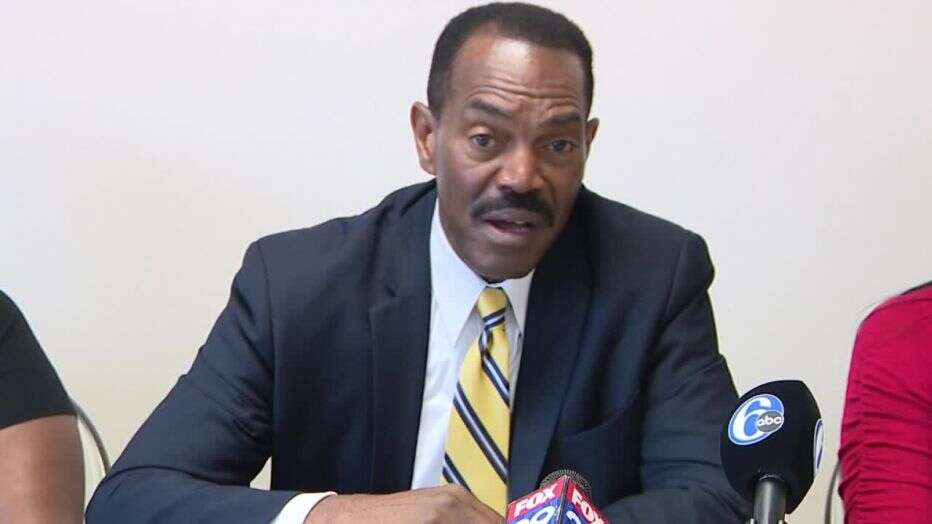 The Zionist Organization of America and its Greater Philadelphia Chapter thank and are grateful to Pennsylvania State Sen. Anthony H. Williams and State Sen. Vincent J. Hughes for their clear and direct calls stating that Nation of Islam Minister Rodney Muhammad should no longer be president of the NAACP of Philadelphia after Muhammad’s anti-Jewish social media posts came to light last week. ZOA has also demanded that he be removed from his post. We also commend the Jewish Federation of Greater Philadelphia, the NAACP Pennsylvania State Conference, and the NAACP Main Line Branch for their strong statements. The National NAACP has been silent on the matter.

Much of the media and outcry are focused on a Muhammad post claiming that Jews are controlling and oppressing black Americans, but between Muhammad’s own Facebook and Twitter pages, and the Facebook page of Muhammad’s Mosque #12 — which he controls — there have been dozens of posts that promote Jew-hatred, incite violence, seek to delegitimize the Jewish People, or endorse speeches filled with anti-Jewish rhetoric. Some include Nation of Islam leader Louis Farrakhan.

After failing to apologize and claiming ignorance in an earlier statement, on July 30 Muhammad issued a new statement on the letterhead of the NAACP Philadelphia Branch, in which he again neglected to apologize for Jew-hatred.

“Last Thursday I learned of an image posted on my timeline that bared significant offense to the Jewish community.” But astoundingly Muhammad couches this in a passive voice – not admitting that it was he who posted it. He also again claimed he was not aware that it was antisemitic and offensive: “After learning of it’s[sic] significance I immediately of my own volition removed it. I do regret the insult, pain and offense it caused to all particularly those of the Jewish community by this unfortunate episode.”

Muhammad added: “I AM NOT NOR ARE ANY OF OUR MEMBERS ANTISEMITIC!”

Another posted egregious meme depicts a stereotypical, Nazi-like caricature of a kippah-wearing man with a large, hooked nose with bejeweled fingers. With one hand he is crushing a group of people. Beneath the caricature is the caption: “To learn who rules over you, simply find out who you are not allowed to criticize.” The meme came to light on July 24 after a local website wrote about it.

Rodney Muhammad’s mosque continues to post anti-Jewish messages. There was this post on July 29: “’The Honorable Minister Louis Farrakhan forcefully responded to the long-standing and unrelenting campaign of racist hate and slander conducted by the Jewish leadership — the Minister outlined in meticulous detail the innumerable historical grievances Blacks have against Jews, much of it contained in two books… ‘The Secret Relationship Between Blacks and Jews,’ Vol. 2, allows us unprecedented access to the private confessions of Jewish scholars and rabbis about their strategy of using the Black Man and Woman as scapegoats for their own economic and political advancement. JEWS SCAPEGOATING BLACKS: A LONG HISTORY OF HATE https://noirg.org/news/jews-scapegoating-blacks-a-long-history-of-hate/.” Included were images of the covers of those books.

On July 27, his mosque posted this: “Those of you who say that you are Jews, I will not give you the honor of calling you a Jew; you are not a Jew! You’re So-Called [a Jew], you are Satan and it is my job now to pull the cover off of Satan so that every Muslim, when he sees Satan, [will/should] pick up a stone. As we do in Mecca, — when you know who Satan is, you don’t have to kill him, No. The stone of #Truth; see, that’s what you throw. Allah says, ‘Had We wished to take a pastime from before, sure We would have done it. Nah, we cast #Truth at falsehood ’til we knock out it’s brains!’ Every one of you who knows #Truth, STAND UP and TELL IT from the mountain top!” ~The Honorable Minister Louis Farrakhan / The Criterion, July 4th Announcement.” There were links to two clips from Farrakhan’s July 4 speech — a speech which was laced with Jew-hatred and attacks against Israel and Christians.

As ZOA has previously noted, it strains credulity that the NAACP can have as a local leader a man who is part of the leadership of the Nation of Islam, which for decades has attacked and spread falsehoods about Jews and Israel, whites, Christians and Catholics, and the LGBTQ community.

Williams, who received Greater Philadelphia ZOA’s Friend of Zion Award in 2013, noted his long and positive relationship with the Jewish community. “That meme is not just anti-Semitic, it’s racist, and people have forgotten its history,” Williams said, invoking the Nazi Era. “Further, it is now used by some white supremacists all across the world and used consistently not only to state their hatred of Jews but their hatred of African-Americans. The meme was insulting not only for Jews, not just to African-Americans, but anyone who fights in this country for what the standard is supposed to be — a star that shines brighter than anyplace else in the world, that allows acceptance not based upon race, religion or creed but because you’re a human being.”

He added: “Anyone who, one, cannot find themselves the ability to apologize when you say you’re stepping on their toes or kneeling on their neck, let alone say they represent the highest standard of inclusion — I can’t stand with that person. So for me, I’m very clear: Until the NAACP in Philadelphia decides to straighten out its house, I can no longer be a participant with that. … “That meme represents the most reprehensible, the most vile — and frankly I do not accept ignorance from anyone in our generation that says or suggests that they don’t understand what that meme meant.”

Williams said: “I’m past waiting for an apology. We are well past that point. Those of us who are leaders (of ethnic, racial) who look and seek and demand that this nation unite and remove barriers based upon religion, race and gender have to stand in alliance and against anyone who makes those statements publicly.”

Hughes said: “I want to say something real clear … the meme that was posted in no way reflects the state of the relationship between blacks and Jews in 2020. … Blacks and Jews have a good, productive, historical relationship. The meme was antisemitic.” Hughes said he spoke to Muhammad and suggested the NAACP leader apologize. “Obviously there was no apology. And as I said I believe he needs to step away from the organization.”

The NAACP Pennsylvania State Conference said in a statement: “NAACP strongly condemns denigrating statements regarding persons of the Jewish faith and denounces the post made on social media by NAACP Philadelphia Branch President Rodney Muhammad. The illustration depicting an anti-Semitic cartoon in no way reflects the thoughts and work of the NAACP and in fact is found to be reprehensible.”

The Jewish Federation of Greater Philadelphia said in a statement: “On Thursday, Rodney Muhammad, President of the Philadelphia NAACP, intentionally initiated the spread of antisemitism on his Facebook page. This vile behavior from a civic leader is incredibly dangerous for Jewish communities across the world. The Jewish Federation of Greater Philadelphia deplores Mr. Muhammad’s actions, and calls on the NAACP to remove him from his position immediately.”

Some Philadelphia NAACP officials spoke out in support of Muhammad, according to a KYW Radio report: “’I wouldn’t ask him to resign for something like that,’ countered Harold James, an executive board member of the Philadelphia NAACP. ‘I don’t think he needs to apologize,’ James continued. ‘He didn’t know what it represented.’”

Philadelphia Sheriff Rochelle Bilal said on WURD Radio in Philadelphia on July 28: “I’m a member of the NAACP and I’m calling for him not to resign,” and instead condemned those who called on Muhammad to step down.

ZOA rejects claims that anyone could be unaware that such imagery is anti-Jewish. In fact we are convinced that because of the volume of anti-Jewish material that has been on his social media and on that of his mosque’s — as well as many of the comments that Muhammad’s social-media followers have made in response to these posts — that he was well-aware of what the meme conveyed. Such Jew-hatred and calls for violence must not be tolerated. National NAACP leaders must condemn Muhammad and remove him.

We would love to hear from you! Please fill out this form and we will get in touch with you shortly.
Trending Z
News July 31, 2020
New Biden Nominees Opposed Abraham Accords & Involved in Israeli Election Interference
Uncategorized July 31, 2020
ZOA Letter to DOJ & FBI on New “Mapping Project” Antisemitic Threat by ZOA Pres. Morton Klein, Dir. of Research/Special Projects Liz Berney, Esq., Dir. Center for Law & Justice Susan Tuchman, Esq.
Op-Ed July 31, 2020
ZOA’s Mort Klein JPost Op-Ed: BDS Mapping Project Targets Every Jew, Including Left Wing, Israelophobic Jews
News July 31, 2020
U.S. Senators Criticize Tamara Wittes, Biden Nominee’s Anti-Israel Bias ― Jewish Groups are Deafeningly Silent
Center for Law & Justice
We work to educate the American public and Congress about legal issues in order to advance the interests of Israel and the Jewish people.
We assist American victims of terrorism in vindicating their rights under the law, and seek to hold terrorists and sponsors of terrorism accountable for their actions.
We fight anti-Semitism and anti-Israel bias in the media and on college campuses.
We strive to enforce existing law and also to create new law in order to safeguard the rights of the Jewish people in the United States and Israel.
Our Mission
ZOA STATEMENT
The ZOA speaks out for Israel – in reports, newsletters, and other publications. In speeches in synagogues, churches, and community events, in high schools and colleges from coast to coast. In e-mail action alerts. In op-eds and letters to the editor. In radio and television appearances by ZOA leaders. Always on the front lines of pro-Israel activism, ZOA has made its mark.
Related Articles
OP-ED ZOA Criticizes ADL for Falsely Alleging Trump Advisor Bannon is Anti-Semitic

The Zionist Organization of America (ZOA) organized four other partner organizations to call on Kent State University to stick with its decision to retain a university display featuring Golda Meir, despite ongoing threats and accusations from the so-called anti-Semitic “Students for Justice in Palestine” (SJP) group on campus and its allies.  The display contains a […]