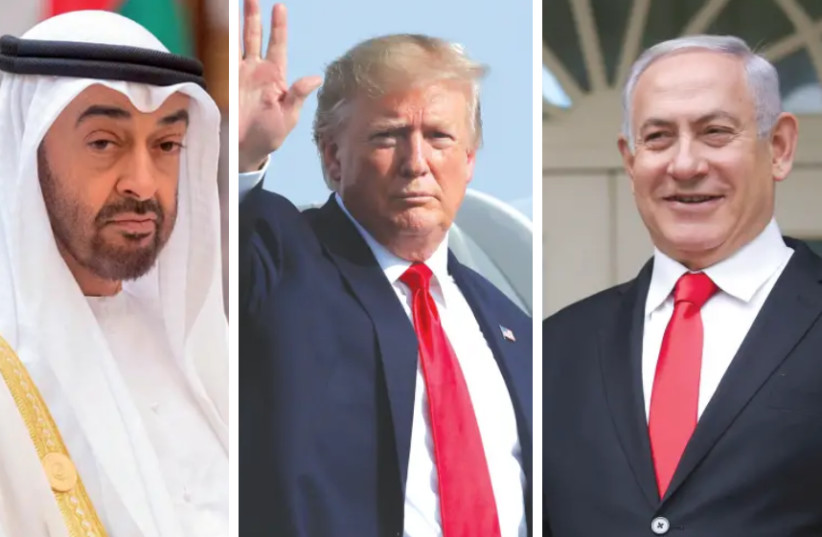 The Israel-UAE agreement will be an important bulwark against dangerously increasing Iranian aggression, as well as a source of benefits to the Israeli and Emirati people.

ZOA hopes and urges the UAE to establish its embassy in Israel’s eternal capital Jerusalem, just as UAE has their embassies in the Capital cities of other countries. ZOA also urges that the formal agreement between Israel and the UAE should include UAE recognition of Israel as the Jewish state and homeland.

The Middle East has come a long way since the Arabs’ infamous, hateful “three no’s” Khartoum resolution in 1967 (no peace with Israel, no recognition of Israel, and no negotiations with Israel). The formal Israeli-UAE agreement to be signed shortly will mark the third Arab-Israeli peace agreement, after the Israel-Jordan Peace Treaty in 1994 and the Israel-Egypt Peace Treaty in 1979. ZOA is also pleased to hear that, thanks to the assistance of the U.S. administration, additional Arab-Israeli agreements may come to fruition.

ZOA wishes to also congratulate Secretary of State Mike Pompeo, Ambassador David Friedman, Presidential Senior Adviser Jared Kushner, Assistant to the President and Special Representative for International Negotiations Avi Berkowitz, and Aryeh Lightstone for their extraordinary and historic work on the Israel-UAE deal, which increased the real possibility of greater security and prosperity for all countries in the region.

ZOA is however disappointed that the deal temporarily suspends Israel’s restoration of her sovereignty over lawful and historic Jewish lands in Judea/Samaria and the Jordan Valley where 500,000 Jews live.  We hope that restoration of Israel’s rightful sovereignty will occur in the very near future.  It is vital, for Israel’s security and the well-being of the large Jewish population in Judea/Samaria, for Israel to restore her rightful sovereignty prior to the upcoming U.S. election, which is only 82 days away.

We would love to hear from you! Please fill out this form and we will get in touch with you shortly.
Trending Stories
News August 13, 2020
Let Self-Haters Ben Cohen and Jerry Greenfield Choke on Their Woke – Israel National News
Action Alerts August 13, 2020
Zionist Organization of America (ZOA) Action Alert: Boycott Ben & Jerry’s Ice Cream & Products for Boycotting Israel
News August 13, 2020
ZOA Documents Years of Antisemitism at Fairfax, VA Public Schools – Demands Corrective Measures to Protect Jewish Students
Action Alerts August 13, 2020
ZOA ACTION ALERT: Israel In Danger: Zionist Organization of America Members and Others Please Take Action
Our Mission
ZOA STATEMENT
The ZOA speaks out for Israel – in reports, newsletters, and other publications. In speeches in synagogues, churches, and community events, in high schools and colleges from coast to coast. In e-mail action alerts. In op-eds and letters to the editor. In radio and television appearances by ZOA leaders. Always on the front lines of pro-Israel activism, ZOA has made its mark.
Center for Law & Justice
We work to educate the American public and Congress about legal issues in order to advance the interests of Israel and the Jewish people.
We assist American victims of terrorism in vindicating their rights under the law, and seek to hold terrorists and sponsors of terrorism accountable for their actions.
We fight anti-Semitism and anti-Israel bias in the media and on college campuses.
We strive to enforce existing law and also to create new law in order to safeguard the rights of the Jewish people in the United States and Israel.
Related Articles
OP-ED BY: ZOA Deeply Troubled That U.S. Senate Confirmed Iran/ Terror Group Apologist, Anti-Israel Hagel for Secy.