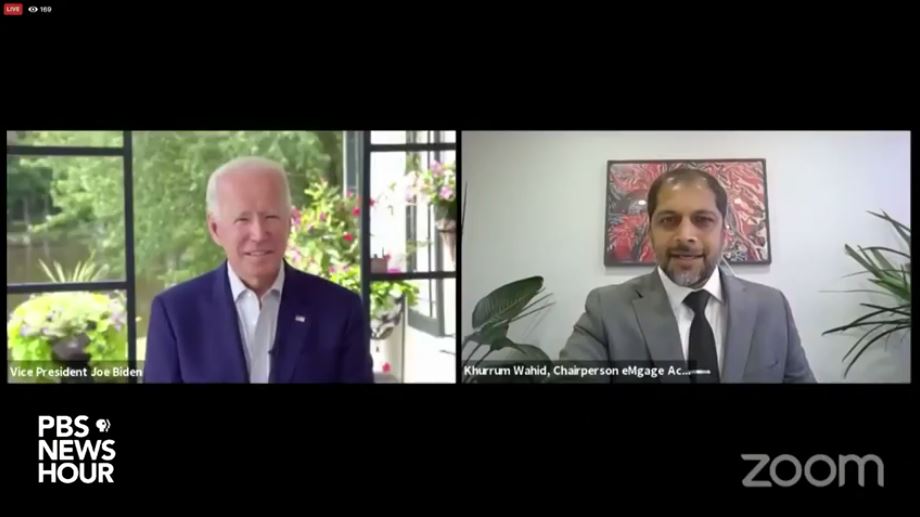 Note:  ZOA does not endorse or reject political candidates.

The Zionist Organization of America (ZOA) previously noticed a particularly unusual statement made by former VP Joe Biden, during his appearance on July 20, 2020 at the “Million Muslim Votes Sumit” alongside a “who’s who” of the worst antisemitic Israel-bashers in the United States. At this Muslim Summit, both VP Joe Biden and CAIR’s Nihad Awad (who openly declared his support for Hamas) recited the following Islamic Hadith:

However, we didn’t previously write about the Hadith that Biden and Nihad Awad recited, because we were unsure of the Hadith’s meaning in Islam. We have now heard from Islam experts.

In addition, Islam expert and former Muslim, Ayaan Hirsi Ali, a Fellow at the Hoover Institute at Stanford University, in a recent appearance on Tucker Carlson, similarly explained that what Biden is doing by quoting this Islamic Hadith, which Muslims clearly understand, is “enforcing Sharia law and it is vigilantism on steroids. . . [Biden is saying] Let’s enforce Sharia law. . . . I’m alarmed. . . . He is enforcing Sharia law. . . Sharia vigilantism.”

Similar to Dr. Bostom, Ms. Hirsi Ali also noted that in the Hadith that Biden quoted, the word “hand” can refer to the sword, or other violent means such as firearms, or improvised explosive devices (IEDs), including the explosive-filled pressure cooker used by Islamists to kill and maim runners and bystanders at the Boston Marathon massacre in 2013. Ms. Hirsi Ali also noted that organized Muslim Brotherhood groups were behind the Muslim Summit. (See video at “Ayaan Hirsi Ali calls out Biden for quoting Muhammad pronouncing Sharia law in remarks to Muslim voters,” Fox News, Aug. 12, 2020.)

Ayaan Hirsi Ali called for Joe Biden to apologize, saying: “Joe Biden should come out and apologize profusely to the American people, especially to those American Muslims who have adopted and embraced the foundational principles of America.”

ZOA agrees, and likewise calls for VP Joe Biden to strongly apologize for reciting a Hadith that promotes Sharia and violence.

ZOA also reiterates our demand that VP Joe Biden needs to apologize for appearing at the “Million Muslim Votes Summit” alongside virulent Jew-haters and Israel-bashers, including: Linda Sarsour (who says that throwing rocks at Israelis is “the definition of courage,” proudly stood with a terrorist who murdered young Jews, and said Zionists will not be allowed at her recent rally and called for people to be constantly out on the streets to oppose Israel); Ilhan Omar (who calls Israel “evil,” accused Jews of buying Congress, promotes pro-BDS legislation in Congress, and compares boycotting Israel to boycotting Nazis); Muslim Public Affairs Council (MPAC) founder Salam al-Marayati (who praises Hezbollah and calls for Israel’s destruction); and the Council of American Islamic Relations (CAIR) (an unindicted co-conspirator for funding Hamas) Executive Director Nihad Awad (who openly declared his support for Hamas and promotes policies that seek Israel’s destruction). Would Joe Biden ever have appeared at a conference where David Duke and other White Supremacists and Black-hating racists were prominently in attendance? Of course not. Then why has he appeared with-Jew haters and Israel-haters in prominent attendance?

Further, ZOA reiterates our demand that VP Joe Biden needs to apologize for and retract a host of hostile-to-Israel-and-America and unconstitutional policies that Biden announced at the Million Muslim Votes Summit and in Biden’s written statement to the Summit organizers. Biden’s dangerous announced policies include: resuming the flow of American tax dollars to the terrorist dictatorship of the Palestinian Authority which promoted its “pay to slay” payments to murder Jews and Americans; reinstating the catastrophic Iran deal; rejoining the antisemitic Israel-bashing UN Human Rights Council; condemning moderate Arab leaders of Egypt and Saudi Arabia; “pressing Israel” not to invoke her sovereign rights in Judea/Samaria; “opposing settlement expansion” (meaning opposing Jewish homes on historic Jewish lands; As VP, Biden even opposed Jewish home building in Jerusalem); “championing” Palestinian-Arab [non-existent] “rights” to a [terror] state; ending travel restrictions from terrorist countries that keep Americans safe from un-vettable and likely Jew-hating migrants “on day one”;and teaching the Islamic faith in American schools, violating separation of church and state.

We would love to hear from you! Please fill out this form and we will get in touch with you shortly.
Trending Z
News August 17, 2020
ZOA Condemns U.S. State Dept. & U.S. Amb. Nides For Siding with Antisemitic, Discriminatory Palestinian & Hamas Terrorists re: the Temple Mount, Violating Jews’ Religious Freedom
News August 17, 2020
ZOA’s Klein JPost Op-Ed: There is Nothing Extreme About Israel’s New Government
Uncategorized August 17, 2020
FLASH: ISRAEL-JORDAN PEACE TREATY (1994) GUARANTEES JEWS ACCESS TO THE TEMPLE MOUNT – LET MY PEOPLE PRAY
Uncategorized August 17, 2020
ZOA Analysis: Most American Rabbis Who Are Boycotting Some Israeli Ministers Are From Extremist Left Wing Groups (J Street; T’ruah; JVP)
Center for Law & Justice
We work to educate the American public and Congress about legal issues in order to advance the interests of Israel and the Jewish people.
We assist American victims of terrorism in vindicating their rights under the law, and seek to hold terrorists and sponsors of terrorism accountable for their actions.
We fight anti-Semitism and anti-Israel bias in the media and on college campuses.
We strive to enforce existing law and also to create new law in order to safeguard the rights of the Jewish people in the United States and Israel.
Our Mission
ZOA STATEMENT
The ZOA speaks out for Israel – in reports, newsletters, and other publications. In speeches in synagogues, churches, and community events, in high schools and colleges from coast to coast. In e-mail action alerts. In op-eds and letters to the editor. In radio and television appearances by ZOA leaders. Always on the front lines of pro-Israel activism, ZOA has made its mark.
Related Articles
OP-ED BY: ZOA Staff ZOA Criticizes Susan Rice’s Ludicrous Crit of Israel PM As “Destructive”

The Zionist Organization of America (ZOA) has criticized President Barack Obama’s National Security Adviser, Susan Rice, for her recent, ludicrous comment alleging that Israeli Prime Minister Benjamin Netanyahu was being partisan and “destructive” of the U.S./Israeli relationship by deciding to accept the invitation to address the U.S. Congress. In an interview on the PBS television […]

The Zionist Organization of America (ZOA) today strongly praised the Senate Foreign Relations Committee for unanimously passing the Iran Nuclear Agreement Review Act, (S. 615), which ensures that Congress will have the right to approve or disapprove whatever agreement may emerge from the nuclear weapons negotiations with the extremist Islamic Republic of Iran. This bill […]