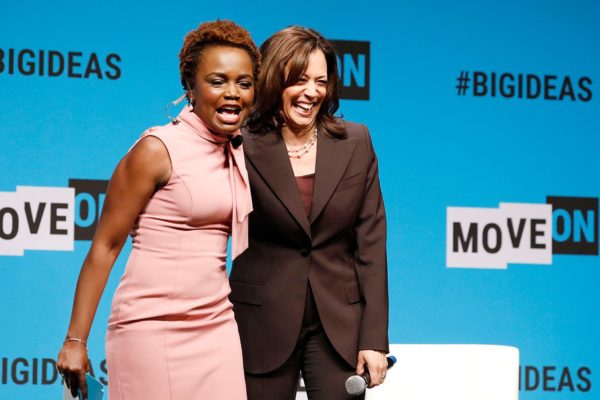 The Zionist Organization of America is urging that Sen. Kamala Harris fire her new Chief-of-Staff Karine Jean-Pierre. Ms. Jean-Pierre is a radical Israel-hater and former spokesperson and senior advisor for the radical Soros-funded MoveOn.org.

In her Newsweek article in March, Ms. Jean-Pierre repeated the blood libel that “Israel may have committed war crimes in its attacks on Gazan protesters.”Ms. Jean-Pierre displayed enormous hostility to the Jewish state and people by falsely maligning Israel, for ethically defending Israeli citizens against Hamas and Palestinian Islamic Jihad (PIJ) terrorists. Hamas and PIJ terrorists set off explosives at Israel’s border fence to try to enable 30,000 Hamas-led Arabs to invade Israel, with maps in their hands showing the routes to Israeli kindergartens, to carry out Hamas leader Yahya Sinwar’s exhortation: “we will eat the livers of the Israelis“.

Ms. Jean-Pierre also falsely accused AIPAC of “alarming,” “severely racist, Islamophobic rhetoric,” of being an “obstacle to progress,” and of “trafficking in anti-Muslim and anti-Arab rhetoric while lifting up Islamophobic voices and attitudes.” It was absurd for Ms. Pierre to level such accusations against AIPAC. In fact, AIPAC too often has a left-leaning lobbying agenda, including promoting Palestinian Arab statehood on Jewish land (the so-called, misleadingly-named “two-state solution”), and not supporting the right of Jews to live anywhere in Judea/Samaria, and not immediately and strongly supporting the Taylor Force Act which cut all $500 million in U.S. aid to the Palestinian Authority until they stopped paying Arabs to murder Jews and Americans.

Ms. Jean-Pierre also viciously lambasted AIPAC’s rightful opposition to the catastrophic Iran deal, and condemned speakers at the AIPAC Conference who appropriately criticized Jew-haters and Israel-haters in Congress – a reference to Ilhan Omar and Rashida Tlaib and AOC.

In the same article, Ms. Jean-Pierre also gloated that “[n]ot one Democratic candidate for president showed” (which included Biden and Harris) up for the 2020 AIPAC national policy convention; indicated that MoveOn.org helped create the Democratic presidential candidates’ anti-AIPAC boycott; and praised the “no-show” Democrats as “boldly choosing to prioritize diplomacy and human rights over the power of a lobbying organization.”

Ms. Jean-Pierre is thus advancing the sickening, dangerous, Orwellian “cancel destruction culture” that falsely condemns and seeks to ostracize pro-Israel groups, even left-leaning ones, as “Islamophobic,” “against human rights,” and unfit to meet with.

According to the New York Post, Joe Biden’s campaign assigned Ms. Jean-Pierre to be Kamala Harris’ chief-of-staff for her vice presidential run. Senator Harris needs to reject Biden’s assignment to her of a blatant antisemite and Israel-hater to be her chief-of-staff. Further, VP Biden and Sen. Harris need to assure the public that antisemite Karine Jean-Pierre will not be part of a Biden-Harris administration.

We would love to hear from you! Please fill out this form and we will get in touch with you shortly.
Trending Z
Op-Ed August 19, 2020
Israel National News: Jonathan Pollard – Israel is Heading to Disaster
Op-Ed August 19, 2020
My Disturbing Encounter With the Harvard Crimson Regarding its Publication of a Blood Libel Against Israel and My Efforts to Refute it
News August 19, 2020
ZOA Condemns Biden’s Appointment of Another Israel-Basher Karine Jean-Pierre as Press Secretary
News August 19, 2020
ZOA Urges NY Museum of Jewish Heritage to Apologize/Retract Their Disgraceful Canceling Great Friend of Israel and the Jewish People, Governor Ron DeSantis
Center for Law & Justice
We work to educate the American public and Congress about legal issues in order to advance the interests of Israel and the Jewish people.
We assist American victims of terrorism in vindicating their rights under the law, and seek to hold terrorists and sponsors of terrorism accountable for their actions.
We fight anti-Semitism and anti-Israel bias in the media and on college campuses.
We strive to enforce existing law and also to create new law in order to safeguard the rights of the Jewish people in the United States and Israel.
Our Mission
ZOA STATEMENT
The ZOA speaks out for Israel – in reports, newsletters, and other publications. In speeches in synagogues, churches, and community events, in high schools and colleges from coast to coast. In e-mail action alerts. In op-eds and letters to the editor. In radio and television appearances by ZOA leaders. Always on the front lines of pro-Israel activism, ZOA has made its mark.
Related Articles
OP-ED ZOA Urges ADL: Retract Praise for Woefully Inadequate House “Antisemitism” Resolution

On April 11, 2019, the Chai Center of Dix Hills, New York, hosted a program entitled, “Antisemitism in America and the Deafening Silence,” featuring ZOA National President Morton Klein as the keynote speaker. Mr. Klein was met with a standing ovation – before he even uttered a word. When he introduced Mr. Klein, Rabbi Yaacov […]