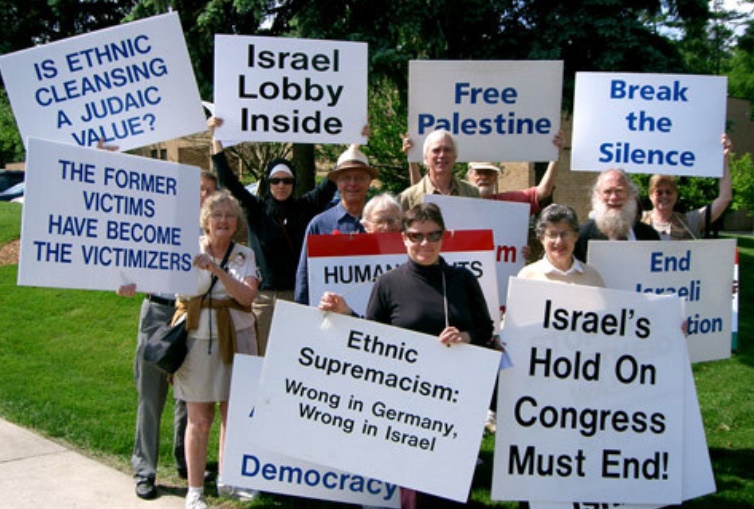 The Zionist Organization of America (ZOA) expresses its disappointment and horror about a federal district court ruling last week, which determined that weekly antisemitic and anti-Israel protests outside of Beth Israel Congregation, a Michigan synagogue, are protected under the First Amendment and can continue. The protests, ongoing every Saturday since 2003, coincide with the synagogue’s Shabbat services. Every week, the protestors place 18-20 signs outside the synagogue with messages such as “Resist Jewish Power,” “Jewish Power Corrupts,” “End the Palestinian Holocaust,” and “Zionism is Racism.”

In dismissing the lawsuit challenging the protestors’ actions, U.S. District Judge Victoria A. Roberts wrote: “There is no allegation that the protestors prevent Plaintiffs from attending Sabbath services, that they block Plaintiffs’ path onto the property or to the Synagogue, or that the protests and signs outside affect the services inside. Plaintiffs merely allege that the Defendants’ conduct causes them distress and ‘interferes’ with their enjoyment of attending religious services.”

Expressing outrage about the lawsuit’s outcome, ZOA National President Morton A. Klein and ZOA National Board Chair Mark S. Levenson, Esq. stated: “The ZOA of course understands the free speech rights afforded to us under the First Amendment. We support those rights.

“But we believe that the court gave insufficient weight to the First Amendment rights of those who simply wished to pray as Jews on Shabbat, unhampered. That right should not be limited strictly to the actual prayer service. The right to freely worship should include the right of Jews to go in and out of their synagogue with peace of mind and without any fear or worry of being accosted each week by 18 to 20 signs attacking them as Jews and supporters of their religious and ancestral homeland, the Jewish state of Israel. These protests do affect the Plaintiffs’ right to worship as Jews.

“The judge could have placed reasonable time, place, and manner restrictions on the protestors – for example, by ordering that the protests take place physically further away from the synagogue, or that they take place at a time that does not coincide with when most of the worshippers enter and exit the synagogue to pray. Such reasonable restrictions would protect the protestors’ First Amendment rights while at the same time protecting Jewish worshippers’ First Amendment right to practice their religion as they choose, unimpeded.

“We understand that the Plaintiffs are moving for reconsideration of Judge Roberts’ decision. We respectfully urge the court to modify last week’s ruling so that everyone’s constitutional rights are protected.”

We would love to hear from you! Please fill out this form and we will get in touch with you shortly.
Trending Z
News August 26, 2020
At ZOA Gala Secy Pompeo Gave the Greatest, Most Pro-Israel Speech Ever Delivered by a Public Official
News August 26, 2020
Dershowitz in Arutz 7: NYC’s Temple Emanu-El Silences a Pro-Israel Voice & Promotes an Anti-Israel Voice
Uncategorized August 26, 2020
Jewish Press: Has Deborah Lipstadt Undercut Both Herself and Future Antisemitism Envoys?
CLJ August 26, 2020
ZOA Letter to Jason Wingard, President, Temple U, Concerning an Antisemitic Incident
Center for Law & Justice
We work to educate the American public and Congress about legal issues in order to advance the interests of Israel and the Jewish people.
We assist American victims of terrorism in vindicating their rights under the law, and seek to hold terrorists and sponsors of terrorism accountable for their actions.
We fight anti-Semitism and anti-Israel bias in the media and on college campuses.
We strive to enforce existing law and also to create new law in order to safeguard the rights of the Jewish people in the United States and Israel.
Our Mission
ZOA STATEMENT
The ZOA speaks out for Israel – in reports, newsletters, and other publications. In speeches in synagogues, churches, and community events, in high schools and colleges from coast to coast. In e-mail action alerts. In op-eds and letters to the editor. In radio and television appearances by ZOA leaders. Always on the front lines of pro-Israel activism, ZOA has made its mark.
Related Articles
OP-ED ZOA: Holocaust Remembrance Requires Fighting Iran, Anti-Semitic Incitement, PA Goals

The Zionist Organization of America (ZOA) President Morton A. Klein released the following statement: On Holocaust Remembrance Day, we remember the six million innocent Jewish children, parents and grandparents – half of the world’s Jewish population – whom the Nazis and their collaborators gassed, shot, experimented on and starved to death, while the world looked […]

The Zionist Organization of America (ZOA) strongly supports and praises Senator Marco Rubio (R–FL) for his remarks in the Senate hearings on President Donald Trump’s nominee for Ambassador to Israel, David Friedman, in which he explained the absurdity of thinking that creating a Palestinian state under current conditions would be anything but a new terror […]