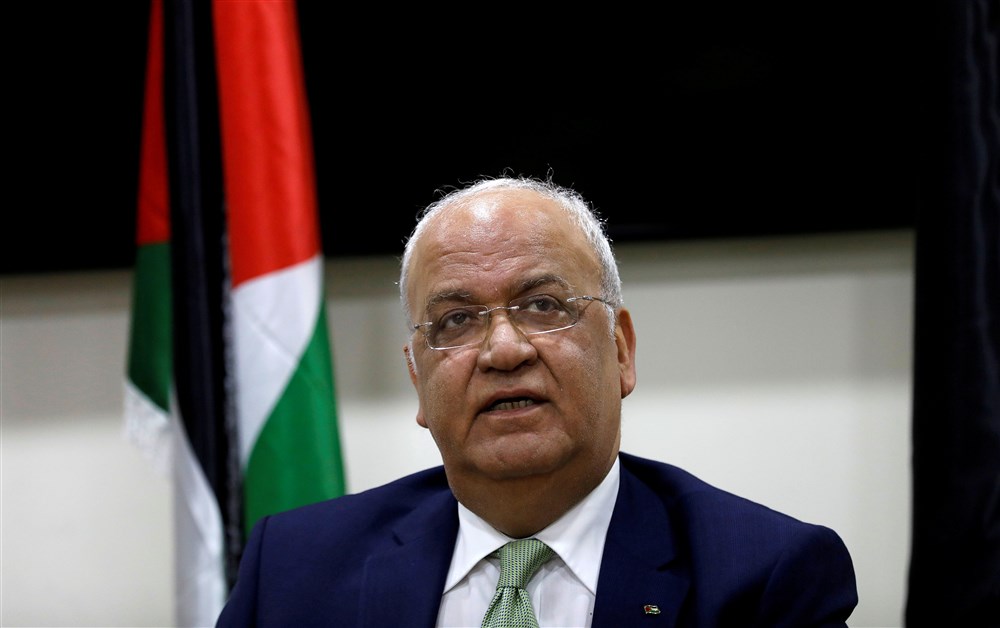 PLO Secretary-General Saeb Erekat was an unrepentant PLO propagandist and inciter of terror and murder against the Jewish people throughout his life.  Erekat also thwarted peace at every turn, rejected Israel’s extraordinarily generous peace offers with no counteroffers, demanded absurd concessions that were tantamount to Israel’s destruction, and openly opposed peace agreements between Israel and Arab nations.

It is thus sickening to read left wing media’s glowing obituaries and left wing groups’ condolence tweets describing Erekat as a “peace negotiator.”  Erekat’s apologists did not even bother to mention that Israel’s top medical providers at Hadassah Hospital made heroic efforts to save Erekat’s life from a complicated case of COVID – despite the fact that Erekat was a vicious enemy of the Jewish state and people, and a supporter of boycotting Israel (BDS).

Here are some examples of how Erekat consistently and hatefully promoted anti-Jewish terror and opposed peace:

In fact, Jenin was a pitched battle in which 23 Israeli soldiers and a confirmed total of only 52 Palestinians (almost all terrorists) were killed.  The IDF was attempting to stop Jenin-based Palestinian Islamic Jihad, PLO, and Hamas terrorists, who led dozens of horrific bombings against innocent Israelis in 2002, including the Netanya Seder attack in which 30 innocent Jews were murdered and 140 Jews were injured.  The 23 Israeli soldiers died in Jenin because they, at their increased risk, went house to house to avoid any possibility of harming Palestinian civilians.  The Arab terrorists booby-trapped the houses to blow up the Israeli soldiers who were trying to protect Arab civilians.  If the IDF had simply blown up the terrorists’ buildings, those 23 murdered Israeli boys would have lived.

In response, Erekat accused the “New York Post and extremists” of lying, and threatened: “every extremist hater, anti-Palestinian racist, will be brought to justice.”

We would love to hear from you! Please fill out this form and we will get in touch with you shortly.
Trending Z
Uncategorized November 11, 2020
ZOA Analysis: Most American Rabbis Who Are Boycotting Some Israeli Ministers Are From Extremist Left Wing Groups (J Street; T’ruah; JVP)
Uncategorized November 11, 2020
ZOA: Israel’s Reasonable Judicial Reform Proposals Are Good for Democracy, the Rule of Law and the Economy
Uncategorized November 11, 2020
Israel’s “Right of Return” Grandparent Clause is De-Judaizing the Jewish State – Eliminate It
News November 11, 2020
ZOA is Disappointed, Offended and Frightened by 211 U.S. House Votes Supporting Jew-Hating, Israel-Hating Rep. Ilhan Omar
Center for Law & Justice
We work to educate the American public and Congress about legal issues in order to advance the interests of Israel and the Jewish people.
We assist American victims of terrorism in vindicating their rights under the law, and seek to hold terrorists and sponsors of terrorism accountable for their actions.
We fight anti-Semitism and anti-Israel bias in the media and on college campuses.
We strive to enforce existing law and also to create new law in order to safeguard the rights of the Jewish people in the United States and Israel.
Our Mission
ZOA STATEMENT
The ZOA speaks out for Israel – in reports, newsletters, and other publications. In speeches in synagogues, churches, and community events, in high schools and colleges from coast to coast. In e-mail action alerts. In op-eds and letters to the editor. In radio and television appearances by ZOA leaders. Always on the front lines of pro-Israel activism, ZOA has made its mark.
Related Articles
OP-ED Fmr. PLO Spokesman Khalidi Repeats Shop-Worn Palestinian Lies In New York Times