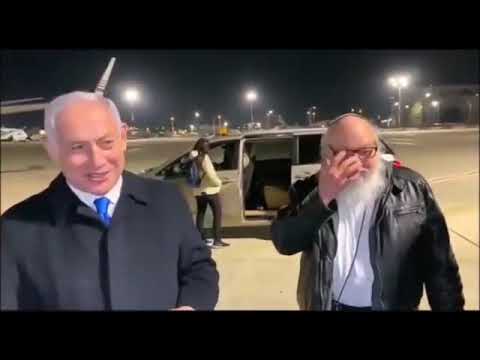 The Zionist Organization Of America (ZOA) welcomes and congratulates Jonathan Pollard and his wife Esther on their final and safe arrival in the ancient Jewish homeland of Eretz Yisroel. We thank and praise Dr. Miri and Sheldon Adelson for providing their private plane to make their long journey easier and more comfortable.

ZOA has long called for Pollard’s release due to his unfair lifetime sentence, when noone under Pollard’s circumstances ever was sentenced to more than five years. We’ve had Pollard’s lawyers speak at our ZOA Galas and welcomed Esther, his wife , in addressing the ZOA National Board.

I was deeply regretful when Judges Ruth Bader Ginsburg and Laurence Silberman refused to grant Pollard a new trial. Only Judge Stephen Williams voted to permit a new trial in the three judge deliberations.

ZOA president Morton A. Klein said, “ All of us at ZOA are thrilled that Jonathan and Esther are now home in the Jewish holy land and were greeted so wonderfully and with love by Prime Minister Netanyahu and all Israelis.

I had the privilege of Jonathan calling me a dozen or more times from prison. It was remarkable that all he wanted to talk to me about was ZOA’s pro-Israel work and what more can we do to help Israel. Jonathan never talked about himself or how we can help him. What a devoted and sincere lover of Israel and Torah. A very special Jew.

We would love to hear from you! Please fill out this form and we will get in touch with you shortly.
Trending Z
News December 30, 2020
ZOA Condemns U.S. State Dept. & U.S. Amb. Nides For Siding with Antisemitic, Discriminatory Palestinian & Hamas Terrorists re: the Temple Mount, Violating Jews’ Religious Freedom
News December 30, 2020
ZOA’s Klein JPost Op-Ed: There is Nothing Extreme About Israel’s New Government
Uncategorized December 30, 2020
FLASH: ISRAEL-JORDAN PEACE TREATY (1994) GUARANTEES JEWS ACCESS TO THE TEMPLE MOUNT – LET MY PEOPLE PRAY
Uncategorized December 30, 2020
ZOA Analysis: Most American Rabbis Who Are Boycotting Some Israeli Ministers Are From Extremist Left Wing Groups (J Street; T’ruah; JVP)
Center for Law & Justice
We work to educate the American public and Congress about legal issues in order to advance the interests of Israel and the Jewish people.
We assist American victims of terrorism in vindicating their rights under the law, and seek to hold terrorists and sponsors of terrorism accountable for their actions.
We fight anti-Semitism and anti-Israel bias in the media and on college campuses.
We strive to enforce existing law and also to create new law in order to safeguard the rights of the Jewish people in the United States and Israel.
Our Mission
ZOA STATEMENT
The ZOA speaks out for Israel – in reports, newsletters, and other publications. In speeches in synagogues, churches, and community events, in high schools and colleges from coast to coast. In e-mail action alerts. In op-eds and letters to the editor. In radio and television appearances by ZOA leaders. Always on the front lines of pro-Israel activism, ZOA has made its mark.
Related Articles
OP-ED Fmr. PLO Spokesman Khalidi Repeats Shop-Worn Palestinian Lies In New York Times