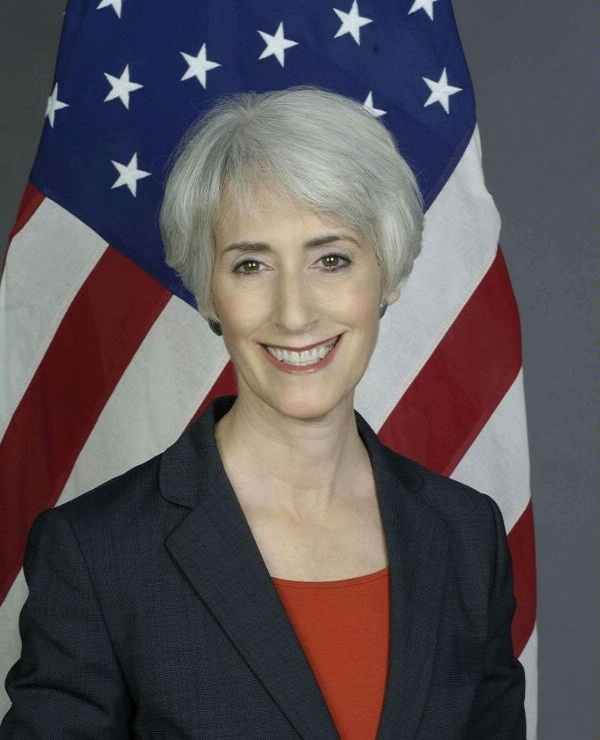 ZOA is deeply concerned about another bad Biden nominee – Wendy Sherman, nominated for U.S. Deputy Secretary of State.  Confirming her would be a mistake.  Sherman’s record includes the following:

Sherman Threatened Israel with UN Consequences if Israel Does Not Accept A Palestinian (Terror) State:  In April 2015, at a Reform Movement conference, Sherman warned Jewish leaders that if the newly-re-elected Israeli Netanyahu government did not demonstrate its commitment to creating a Palestinian (terror) state, the U.S. will have a difficult time continuing to assist its efforts to halt international initiatives on the Palestinian issue at the United Nations.

Sherman Complimented Yasser Arafat as “the Leader of a Resistance Movement”:  As discussed below, Sherman’s 2018 book focuses on whitewashing the Iran negotiations.  However, she also spent a little time revealing her anti-Israel bias.  Sherman calls terrorist Jewkiller Arafat “the leader of a resistance movement.”  Ludicrously, Sherman also blamed Arafat’s refusal to negotiate peace on Rabin’s assassination.  Sherman wrote: “without Rabin, Arafat would not be able to stand his ground against the hard-liners in the PLO.” Sherman also downplayed PLO suicide bombings and other terror attacks on innocent Israelis engineered by Arafat following the Oslo accords, by calling this mere “nagging disruptions from the Palestinian side.”  (p. 98-103.)

Sherman Attacked Israeli PM Netanyahu as Selfish:  In a tweet on September 18, 2019, Sherman wrote: “Israel PM out for himself. . . . Time for change!” Sherman’s undiplomatic attacks on a democratically-elected leader of an ally do not bode well for an undersecretary of state.

Sherman Criticized President Trump and Israeli Prime Minister Netanyahu for Not Mentioning the Irrelevant Palestinians During the Signing of the Abraham Accords with the UAE and Bahrain, in a tweet on September 15, 2020.  There was of course no reason to bring up separate, irrelevant issues during the signing of the Abraham Accords.  Sherman’s tweet reflected the outmoded view that everything must revolve around the PA dictatorship who pay Arabs to murder Jews and have refused to negotiate with Israel for a decade.

Sherman also absurdly wrote: “As the November election approaches, there is no discernible objective of Trump’s policies other than currying personal favor with Israeli Prime Minister Benjamin Netanyahu and, more importantly, with Trump’s evangelical Christian base—while undermining the long-standing bipartisan nature of U.S. support for Israel.”

Sherman Negotiated the Disastrous Iran Deal:  In her appalling 2018 book, “Not for the Faint of Heart: Lessons in Courage, Power & Persistence”, Sherman attempted to justify the catastrophic Iran deal (the JCPOA) that she negotiated on behalf of the United States.

An Amazon reviewer summed up Sherman’s book as follows: “A weak apologia from someone who mishandled every major negotiation she worked on. In cobbling together at the last minute — to give Obama a “victory” — she participated in a major foreign policy blunder that she now wants to paper over.”

In her book, Sherman displays Neville-Chamberlain-like naivety about Iran’s intentions. Echoing Chamberlain’s “peace in our time” appeasement at Munich, Sherman claims that the Iran deal “was anchored by a common wish to make peace,” “higher principles” and “reimagining of the world,” and referred to the Iranians as “partners.”   (e.g., “To make a meaningful deal, we need to see our adversaries not as eternal enemies, or dispensable ones, but as virtual partners.”)

Even worse, Sherman falsely claimed that the deal included “intrusive” and “scrupulous” inspections, and permanently prevented Iran from obtaining a nuclear bomb.  In fact, the JCPOA limits inspectors to declared enrichment sites; forbids inspectors from entering Iran’s military facilities (the likely location for nuclear weapons development); and requires a lengthy month-or-more-long process before inspectors can possibly obtain access to inspect undeclared sites.  The JCPOA also contains sunset provisions that guarantee that the deal will be temporary.  The deal paved Iran’s way to a bomb.

Sherman also repeatedly lauded her relationship-based diplomacy as the key to success – while failing to mention the dangerous concessions that were really behind any purported “success.”  For instance, Sherman claimed that the relationship she developed with the Iranians enabled her to obtain Iran’s release of 5 American hostages in January 2016.  Sherman failed to mention the enormous quid pro quo – which included Obama’s airlift of pallets filled with $1.7 billion of untraceable cash to Iran; Obama’s release of Iranians in U.S. jails who were convicted of endangering U.S. security (including by running a procurement network to supply Iran with U.S.-made microelectronics with applications in surface-to-air and cruise missiles like those recently launched by Iran); and Obama’s dismissal of charges against another 14 Iranians – all on the same day as the hostage release. (See “Obama’s Hidden Iran Deal Giveaway,” Politico, Apr. 24, 2017.)

Sherman also repeatedly disparages sanctions and military strikes as “patently futile,” and even asserts that “an aerial attack would give Iran justification for building an atomic device.”   Sherman ignores the numerous instances demonstrating the effectiveness of military strikes and sanctions.  Israel’s strikes on the Iraqi and Syrian reactors wiped out those nations’ nuclear weapons programs for decades, extending into the foreseeable future.  Sanctions persuaded Libya to give up its aggressive nuclear weapons program.

Sherman’s book also never mentions that the deal gave Iran $150 billion of sanctions relief.  Instead, she refers to “quite limited sanctions relief” in the 2013 provisional deal.

Sherman also ignores that the JCPOA’s sanctions relief gave Iran the wherewithal to dramatically increase Iranian funding of its terror proxies, and  terror and military activities throughout the Middle East.  (See “The Importance of Sanctions on Iran,” Press Statement of Secretary of State Michael R. Pompeo, Nov. 18, 2020, detailing Iran’s use of deal funds from sanctions relief, and how the Trump administration’s re-imposition of sanctions curbed this.)

Also any reasonable deal should have curbed both Iran’s nuclear and non-nuclear malign activities.   Sherman’s failure to do so belied Sherman’s claim that the Iran deal “was anchored by a common wish to make peace.”

Sherman also defends the treacherous secret negotiations in 2012-2013, in which Obama sent William Burns and Jake Sullivan to Oman to offer the Iranians the major concession of permitting continuing uranium enrichment – while outwardly pretending that the U.S. would not allow enrichment, and misleading the American public during Obama’s 2012 re-election campaign.  Sherman was involved in the secret track negotiations.

Sherman’s book also names various Obama administration officials who worked closely with her on her disastrous Iran deal team.  Alarmingly, Biden has been reassembling the same team as his appointees.

Wendy Sherman’s nomination should be retracted.  And if her nomination moves forward, she should not be confirmed.

We would love to hear from you! Please fill out this form and we will get in touch with you shortly.
Trending Z
Uncategorized January 25, 2021
ZOA Analysis: Most American Rabbis Who Are Boycotting Some Israeli Ministers Are From Extremist Left Wing Groups (J Street; T’ruah; JVP)
Uncategorized January 25, 2021
ZOA: Israel’s Reasonable Judicial Reform Proposals Are Good for Democracy, the Rule of Law and the Economy
News January 25, 2021
ZOA is Disappointed, Offended and Frightened by 211 U.S. House Votes Supporting Jew-Hating, Israel-Hating Rep. Ilhan Omar
Uncategorized January 25, 2021
Israel’s “Right of Return” Grandparent Clause is De-Judaizing the Jewish State – Eliminate It
Center for Law & Justice
We work to educate the American public and Congress about legal issues in order to advance the interests of Israel and the Jewish people.
We assist American victims of terrorism in vindicating their rights under the law, and seek to hold terrorists and sponsors of terrorism accountable for their actions.
We fight anti-Semitism and anti-Israel bias in the media and on college campuses.
We strive to enforce existing law and also to create new law in order to safeguard the rights of the Jewish people in the United States and Israel.
Our Mission
ZOA STATEMENT
The ZOA speaks out for Israel – in reports, newsletters, and other publications. In speeches in synagogues, churches, and community events, in high schools and colleges from coast to coast. In e-mail action alerts. In op-eds and letters to the editor. In radio and television appearances by ZOA leaders. Always on the front lines of pro-Israel activism, ZOA has made its mark.
Related Articles
OP-ED ZOA Mourns Passing of Ariel Founder & Visionary, Ron Nachman