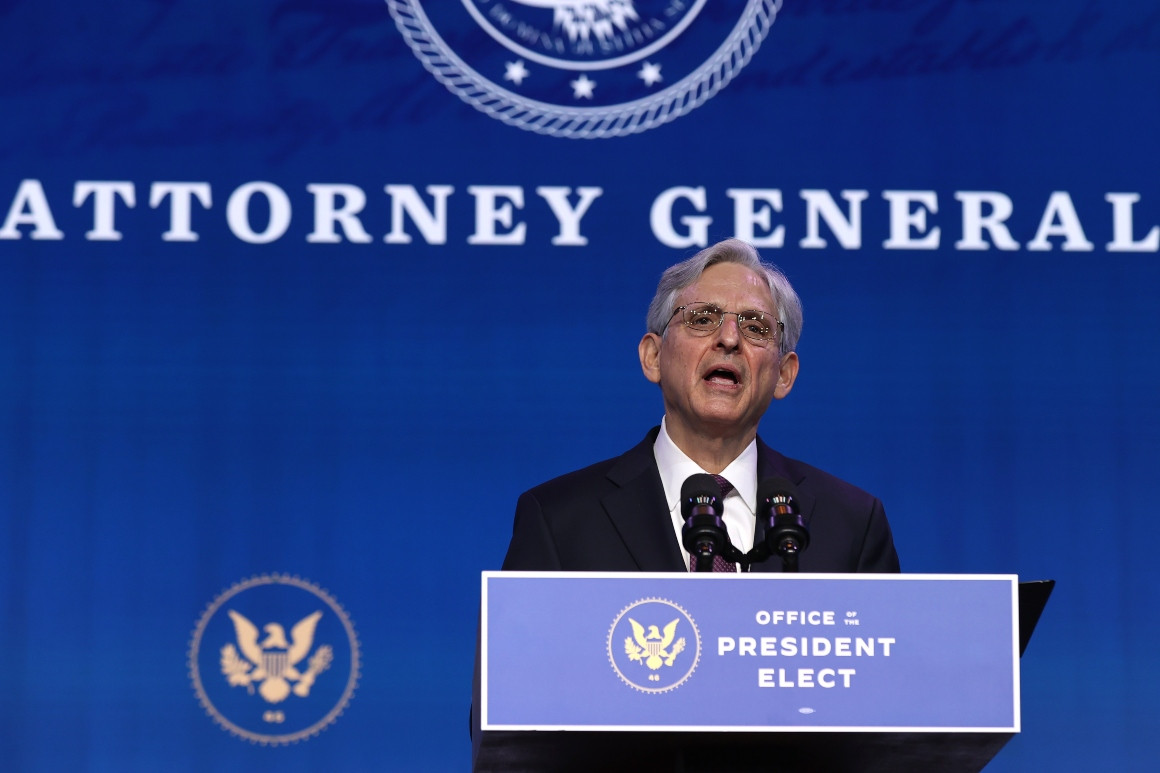 After President-elect Joe Biden announced over a dozen hostile-to-Israel appointees and nominees in recent weeks, ZOA was initially relieved when Biden announced that he is nominating District of Columbia Circuit Court of Appeals Judge Merrick Garland for Attorney General.  Based on his public reputation as a moderate, Judge Garland seemed better than potential alternatives.  However, upon further research, we have serious concerns.  Judge Garland’s decisions repeatedly blocked or limited innocent victims of Palestinian Arab terrorism and Iranian terrorism from obtaining justice.  This bodes ill for his pursuit of such injustices as attorney general.

First, in Estate of Esther Kleiman v. Palestinian Authority and PLO, No. 15-7034, D.C. Cir. (May 14, 2019), Judge Garland (with two colleagues) threw out the case brought by the family of 23-year-old Israeli-American school teacher Esther Kleiman.  A group of Palestinian-Arab terrorists, funded and armed by the PA/PLO, murdered Ms. Kleiman by shooting her in the head while she was traveling to work on an Israeli bus.

Garland held that the U.S. courts had no jurisdiction over the PA/PLO.  Garland wrongly invoked due process, and denied jurisdiction even though Congress had unanimously passed the Anti-Terrorism Clarification Act of 2018 (“ATCA,”Pub. L. No. 115-253, 132 Stat. 3183, 18 U.S.C. §2334(e)) specifically to make sure that U.S. courts have such jurisdiction.  The ATCA makes foreign defendants subject to U.S. court jurisdiction if the defendants have received U.S. assistance, maintained offices in the U.S., or benefited from waivers of U.S. anti-terror laws.  The House Report on the ATCA explains that “[n]o defendant should be able to accept U.S. foreign assistance while simultaneously dodging responsibility in U.S. courts for aiding or carrying out terrorist attacks that harm Americans.” H.R. Rep. No. 115-858, at 6-7. (2018).

The Kleiman family’s application to the U.S. Supreme Court explained that the Garland court ignored grounds set forth in the ATCA, substituted its judgment for Congress’s, and trampled on Congress’ foreign policy objectives of giving American victims of PA/PLO terrorism a remedy in U.S. courts.

(Fortunately, in April 2020, the U.S. Supreme Court vacated and remanded the Garland appellate court and lower court judgment for further consideration in light of the Promoting Security and Justice for Victims of Terrorism Act of 2019 (Pub. L. No. 116–94, div. J, tit. IX, § 903, 133 Stat. 3082).  Estate of Kleiman v. Palestinian Authority, 140 S. Ct. 2713 (2020).  The Supreme Court’s action revived the matter, and gives the Kleiman family some possibility of finally obtaining justice from the PA/PLO responsible for Esther’s murder.)

Note:  The ZOA and its attorneys are not representing the plaintiff in the foregoing case or in any of the cases discussed here.

Second, in Asid Mohamad, Individually and for the Estate of Azzam Rahim v. Jibril Rajoub, et al, No. 09-7109, D.C. Cir. (Mar. 18, 2011), Garland (and two colleagues) threw out the case brought by the family of Palestinian-American Azzam Rahim against the PA and PLO, under the Torture Victim Protection Act (TVPA), 28 U.S.C. § 1350, and federal common law.  During a visit to the “West Bank” (Judea/Samaria), while Rahim was sitting in a coffee shop, PA/PLO security police seized and forced Rahim into an unmarked car, took Rahim to a prison in Jericho, and tortured and killed him.  The Garland court held that the term “individual” in the TVPA did not include groups such as the PA and PLO – even though the term was undefined in the TVPA, and even though the court’s ruling contradicted the purpose of the TVPA – to give victims of torture overseas a remedy in U.S. courts.

Third, in Amy Bettis, et al. v. Islamic Republic of Iran and Iranian Ministry of Information and Security, No. 01-7147, D.C. Cir. (Jan. 17, 2003), Garland (and 2 colleagues) ruled that only Catholic priest Father Lawrence M. Jenco’s siblings – and not Father Jenco’s nieces and nephews – were entitled to damages.  The Islamic, Iranian-proxy terrorist organization Hezbollah abducted Father Jenco while he was working as the Director of Catholic Relief Services in Beirut, Lebanon.  Hezbollah held and brutally tortured Father Jenco for 564 days.  After his release, until his death, Father Jenco was a weak, broken man, plagued by flashbacks of being tortured by Hezbollah.  The Garland court decided that the nieces and nephews were not part of Father Jenco’s “immediate” family – despite their closeness, pain and involvement in seeking their uncle’s release from Hezbollah’s torments.

Fourth, in B. J. Bucheitv. The Palestine Liberation Organization and the Palestinian Authority, No. 03-5264, D.C. Cir. (Nov. 2, 2004), Garland (and 2 colleagues) refused to order the PLO and PA to pay prejudgment interest to an investor in Gaza whose property and business were converted by the PLO/PA – even though the fact that interest was needed to make the plaintiff whole seemed apparent from reading the case.

Fifth, Judge Garland avoided deciding an issue which is often abused by bad actors such as the PA/PLO against Israel and the U.S.   In Ghaleb Nassar Al-Bihani v. Barack Obama, No. 09-5051, en banc, D.C. Cir. (Aug. 31, 2010), Judge Garland (and 5 of his colleagues) “punted” (refused to decide) whether international law-of-war principles limited the powers granted by Congress and exercised by the president under an AUMF (Authorization of Military Force).  The plaintiff, enemy belligerent, Al-Bihani argued that international-law principles (e.g., the Geneva Conventions) prohibited his continued detention in U.S. military custody.  Garland, etc. asserted that deciding this issue was unnecessary for deciding the case.

By contrast to Garland, etc.’s avoidance of the important issues raised by the case, Judge (now Justice) Kavanaugh, who was then a judge on the D.C. Circuit, wrote an extensive, scholarly concurrence in this case, demonstrating that international law norms are not automatically domestic law norms, and are not incorporated into the 2001 AUMF.  Kavanaugh also explained that U.S. law (the Military Commissions Act of 2006, § 5) provides that the Geneva Conventions cannot be invoked in U.S. cases in which the U.S. or its agents are parties.

In addition, Kavanaugh cited “evidence that Congress affirmatively distrusts certain international legal organizations. For example, in 2004, the House of Representatives passed a resolution stating that it

(A) the misuse of the International Court of Justice (ICJ) by a plurality of member nations of the United Nations General Assembly for the narrow political purpose of advancing the Palestinian position on matters Palestinian authorities have said should be the subject of negotiations between the parties; and

(B) the July 9, 2004 advisory judgment of the ICJ, which seeks to infringe upon Israel’s right to self-defense, including under Article 51;

(5) regrets the ICJ’s advisory judgment, which is likely to undermine its reputation and interfere with a resolution of the Palestinian-Israeli conflict; [and]

(6) commends the President and the Secretary of State for their leadership in marshaling opposition to the misuse of the ICJ in this case[.]

Judge Garland should be questioned as to where he stands on these issues, including the use of purported international law to usurp U.S. sovereign legal prerogatives, and the misuses of the International Court of Justice and International Criminal Court against the United States and Israel.

During this speech, Judge Garland stated that “the priorities that lie before us” will be “ensuring racial equity in our justice system” and “meeting the evolving threat of violent extremism,” and pledged to be devoted to these principles as attorney general.

What did Judge Garland mean by “racial equity”?  Did he properly mean treating all persons the same, in a color-blind manner; meting out the same punishment for the same crime, regardless of the person’s race?  If so, that’s wonderful.  Or did he mean a recent concept of limiting arrests of persons of particular races to their race’s percentage in the general population – which can violate the fundamental precepts of real equal justice under the law?

And precisely what did Judge Garland mean by “the evolving threat of violent extremism”? ZOA hopes that means that the DOJ will bring to justice the violent members of White Supremacist groups, neo-Nazis, skinheads and radical violent Islamists as well as violent members of Antifa and Black Lives Matter’s violent rioters who burned down U.S. cities all summer, and perpetrated the anti-Jewish pogrom in Los Angeles – burning and looting stores, synagogues and Jewish schools.

ZOA thus hopes that the Senate will carefully question Judge Garland regarding these issues during his confirmation hearing.

We would love to hear from you! Please fill out this form and we will get in touch with you shortly.
Trending Z
News February 19, 2021
At ZOA Gala Secy Pompeo Gave the Greatest, Most Pro-Israel Speech Ever Delivered by a Public Official
News February 19, 2021
Dershowitz in Arutz 7: NYC’s Temple Emanu-El Silences a Pro-Israel Voice & Promotes an Anti-Israel Voice
Uncategorized February 19, 2021
Jewish Press: Has Deborah Lipstadt Undercut Both Herself and Future Antisemitism Envoys?
CLJ February 19, 2021
ZOA Letter to Jason Wingard, President, Temple U, Concerning an Antisemitic Incident
Center for Law & Justice
We work to educate the American public and Congress about legal issues in order to advance the interests of Israel and the Jewish people.
We assist American victims of terrorism in vindicating their rights under the law, and seek to hold terrorists and sponsors of terrorism accountable for their actions.
We fight anti-Semitism and anti-Israel bias in the media and on college campuses.
We strive to enforce existing law and also to create new law in order to safeguard the rights of the Jewish people in the United States and Israel.
Our Mission
ZOA STATEMENT
The ZOA speaks out for Israel – in reports, newsletters, and other publications. In speeches in synagogues, churches, and community events, in high schools and colleges from coast to coast. In e-mail action alerts. In op-eds and letters to the editor. In radio and television appearances by ZOA leaders. Always on the front lines of pro-Israel activism, ZOA has made its mark.
Related Articles
OP-ED BY: ZOA Staff ZOA Opposes Obama Illegally Seeking to Fund Anti-Israel UNESCO

The Zionist Organization of America (ZOA) praises Senator Ted Cruz (R–TX) and 31 other legislators in their call for the closure of the PLO Office in Washington, D.C. The ZOA supports their position, since Mahmoud Abbas’ Palestinian Authority (PA) has never fulfilled its obligations under the Oslo Accords to outlaw terrorist groups, extradite terrorists, confiscate […]