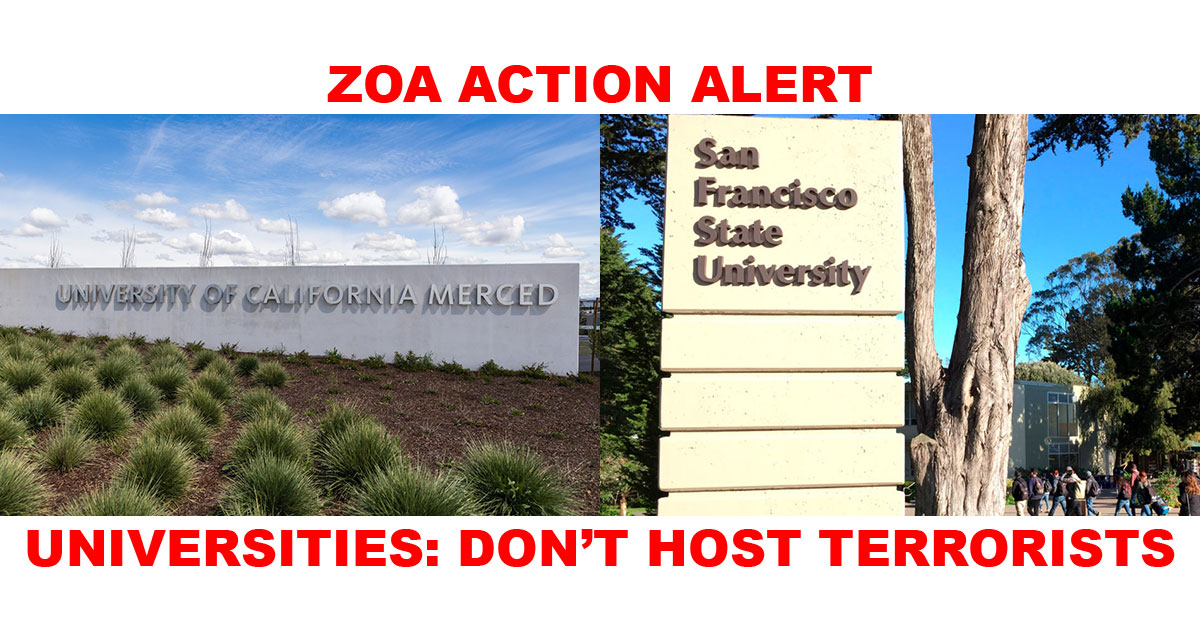 The Zionist Organization of America (ZOA) urges all its supporters to contact the University of California, Merced and San Francisco State University (SFSU), to demand that they cancel an upcoming webinar they are co-sponsoring, featuring Leila Khaled.  Khaled is a terrorist and leader of the Popular Front for the Liberation of Palestine (PFLP), a U.S.-designated foreign terrorist organization.

SFSU had previously planned to host a webinar featuring Khaled, in September 2020, but Facebook, Zoom, and other platforms refused to host it.  As the ZOA wrote to SFSU’s president then, demanding that the webinar be cancelled, Khaled is a serial terrorist.  She hijacked an American passenger plane in 1969 and hijacked a second plane in 1970 – an El Al flight from Amsterdam.  Mid-flight, Khaled and her accomplice tried to storm the cockpit. Khaled took the pins out of the grenades she had with her teeth and ordered the captain to let them in.  Luckily, Israeli sky marshals were on the plane; they killed the accomplice and overpowered Khaled and the plane was diverted to London.  Khaled is unremorseful and continues to support terrorism.

Making matters worse, the upcoming April 23 program with Khaled – titled “Whose Narratives? What Free Speech for Palestine?” – will be moderated by SFSU Professor Rabab Abdulhadi.  Abdulhadi has a long record of cultivating terrorist ties, glorifying terrorists, and spreading hatred of Zionists at SFSU.

UC Merced and SFSU are academic institutions that claim to encourage their students’ intellectual and personal growth.  Both universities tout their commitment to benefiting society.  Given their values, neither school should be giving a podium to a speaker lacking any scholarly credentials, and whose sole distinction is that she is a Jew-hating, Israel-bashing terrorist who supports violence against innocent civilians.  Legitimizing her at all sends a terrible, painful message to Jewish, Israeli and pro-Israel students at both universities.

Contact the leaders of UC Merced and SF State right away.  Let them know that it is morally wrong to give this terrorist a platform, especially in this troubling time of rising antisemitism and violence against Jews.  Let them know that American universities must be welcoming and safe places for all students, including those who are Jewish, Israeli, and supporters of the Jewish state.

We would love to hear from you! Please fill out this form and we will get in touch with you shortly.
Trending Z
News April 19, 2021
New Biden Nominees Opposed Abraham Accords & Involved in Israeli Election Interference
Uncategorized April 19, 2021
ZOA Letter to DOJ & FBI on New “Mapping Project” Antisemitic Threat by ZOA Pres. Morton Klein, Dir. of Research/Special Projects Liz Berney, Esq., Dir. Center for Law & Justice Susan Tuchman, Esq.
Op-Ed April 19, 2021
ZOA’s Mort Klein JPost Op-Ed: BDS Mapping Project Targets Every Jew, Including Left Wing, Israelophobic Jews
News April 19, 2021
U.S. Senators Criticize Tamara Wittes, Biden Nominee’s Anti-Israel Bias ― Jewish Groups are Deafeningly Silent
Center for Law & Justice
We work to educate the American public and Congress about legal issues in order to advance the interests of Israel and the Jewish people.
We assist American victims of terrorism in vindicating their rights under the law, and seek to hold terrorists and sponsors of terrorism accountable for their actions.
We fight anti-Semitism and anti-Israel bias in the media and on college campuses.
We strive to enforce existing law and also to create new law in order to safeguard the rights of the Jewish people in the United States and Israel.
Our Mission
ZOA STATEMENT
The ZOA speaks out for Israel – in reports, newsletters, and other publications. In speeches in synagogues, churches, and community events, in high schools and colleges from coast to coast. In e-mail action alerts. In op-eds and letters to the editor. In radio and television appearances by ZOA leaders. Always on the front lines of pro-Israel activism, ZOA has made its mark.
Related Articles
OP-ED BY: StopAntiSemitism.org Demand Temple University President Richard Englert and the Board of Trustees Follow in CNN’s Footsteps and Fire/Sanction Anti-Semitic Professor Marc Lamont Hill

OP-ED Action Alert: Call Your Representative and Urge Them To Remove Anti-Semitic Omar from the House Foreign Affairs Committee