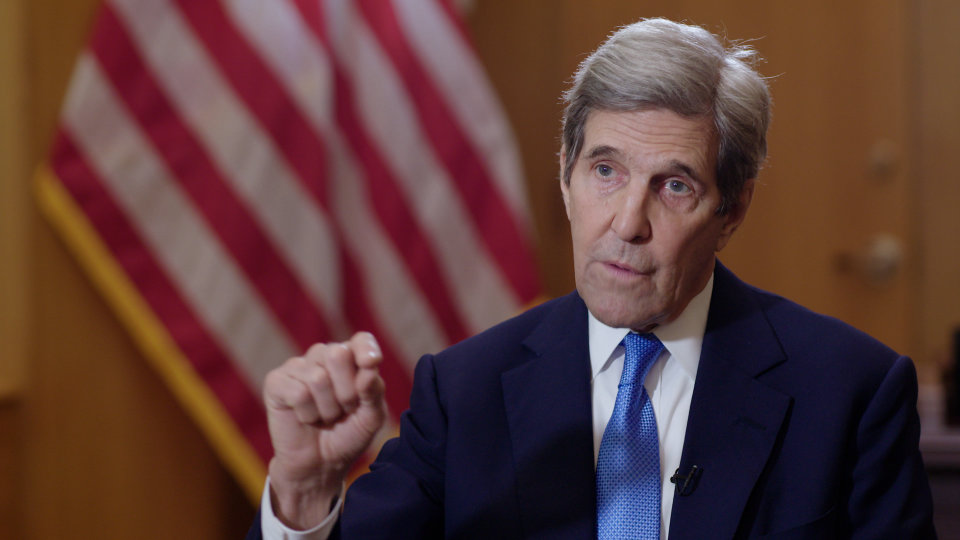 Former U.S. Secretary of State John Kerry is accused of telling Iran about Israeli operations and now there are demands for him to be investigated, and resign, over what he allegedly told them.

Iranian Foreign Minister Mohammad Javad Zarif, in a leaked audiotape, claimed that while Kerry served as America’s top diplomat during the Obama administration, he discussed more than 200 operations that Israel had carried out in Syria against Iranian targets. He said that he was astonished at the revelations.

This comes after Kerry’s meetings with Zarif, held as a private citizen after he left office, have also raised questions about what he has told Iranian officials over the years.

Kerry currently serves as the United States Special Presidential Envoy for Climate. It is a Cabinet-level post in the Biden administration but was not subject to Senate confirmation. The new revelations about Iran have raised some concern in the Senate.

“This is something that deserves a Senate investigation. If it indeed is proven to be accurate, then John Kerry should seriously consider resignation,” said Sen. Marsha Blackburn, R-Tenn., a member of the Senate Judiciary Committee.

The first-term senator added Kerry has put “our men and women in uniform at risk.”

In an interview with Fox News Blackburn said, “This is something that is serious. This is someone who has served our nation at very high levels, that had information, whether as a Senator or as Secretary of State and knew what was happening on the diplomatic and military front, to give that information to someone who is an adversary is something of tremendous concern to me.”

Others agree that a Senate probe of Kerry’s comments is warranted.

“If these egregious allegations are true, we believe Mr. Kerry should be fired,” says Mort Klein, president of the Zionist Organization of America (ZOA), the oldest pro-Israel group in the U.S. He added that there should be “an immediate and thorough investigation.”

Speaking for his national membership of more than 25,000, Klein stated, “To give information as a spy for possibly the most loyal ally that America has, Israel, is not only an outrage to an ally but it sends a message to other allies that certainly, Mr. Kerry can never be trusted and maybe America can’t be trusted with important private confidential information.”

The Executive Director of Iranian Americans for Liberty, a New York-based activist group opposed to the Tehran regime, goes even further.

“These allegations from Iran’s Foreign Minister, if true, are grounds for treason,” according to the group’s executive director, Bryan E. Leib.

“We would like to see a united front from the Democrats and Republicans who serve on the House Homeland Security Committee by immediately issuing a subpoena for John Kerry to appear in a public hearing before the Committee next week,” Leib told Fox News.

If the accusations against Kerry are not true, Lieb added the one-time presidential nominee “should have nothing to worry about and should immediately comply with any subpoena requests from the House Homeland Security Committee.”

Kerry’s climate office is under the aegis State Department, which was asked about his alleged comments.

“This certainly was not secret, and governments that were involved were speaking publicly, on the record,” says State Department Spokesman Ned Price. He declined to speculate on the tape’s authenticity or the reason for its release.

The Iranian Foreign Ministry says that the tape is genuine because it was part of a seven-hour interview Zarif gave to an Iranian think-tank.

Kerry has previously been accused of being too chummy with his former Iranian counterpart. The Obama administration’s former chief diplomat has freely admitted meeting and having conversations with Zarif “three or four times” after leaving office, to discuss American and Iranian foreign policy.

In a 2018 interview with radio host Hugh Hewitt, Kerry said that “my coaching [Zarif] would not, you know, that’s not how it works. What I have done is tried to elicit from him what Iran might be willing to do in order to change the dynamic in the Middle East for the better.”

Former President Trump at the time accused Kerry of holding “illegal meetings with the very hostile Iranian Regime” and said that he should be prosecuted under the Logan Act, which prohibits private citizens from attempting to carry out U.S. foreign policy. Kerry responded by telling Trump “if you want to learn something about the nuclear agreement that made the world safer, buy my new book, ‘Every Day is Extra’.”

The revelations come as the Biden administration is engaged in indirect negotiations in Vienna with Iran to potentially rejoin the controversial Joint Comprehensive Plan of Action (JCPOA) more commonly known as the Iran nuclear deal.

A group of high-level Israel officials, including Yossi Cohen, the director of Mossad, Israel’s national intelligence agency, are also visiting Washington to lodge their objections to the administration’s plans for Iran.

Sen. Blackburn has introduced legislation to prevent the Biden administration from cementing a deal with Iran, unless the agreement is submitted to the Senate for a vote.

“What worries me a good bit, is how these despotic regimes are emboldened to push back against the United States,” said Blackburn.

“We need to send a strong message to our adversaries, and to this new axis of evil of Russia, China, Iran and North Korea that we are going to push back on them and we will not let them win,” she added.

Ben Evansky contributed to this report.This article was originally published by Fox News on April 26, 2021 and can be viewed here.

We would love to hear from you! Please fill out this form and we will get in touch with you shortly.
Trending Z
Uncategorized April 27, 2021
ZOA Analysis: Most American Rabbis Who Are Boycotting Some Israeli Ministers Are From Extremist Left Wing Groups (J Street; T’ruah; JVP)
Uncategorized April 27, 2021
ZOA: Israel’s Reasonable Judicial Reform Proposals Are Good for Democracy, the Rule of Law and the Economy
News April 27, 2021
ZOA is Disappointed, Offended and Frightened by 211 U.S. House Votes Supporting Jew-Hating, Israel-Hating Rep. Ilhan Omar
Uncategorized April 27, 2021
Israel’s “Right of Return” Grandparent Clause is De-Judaizing the Jewish State – Eliminate It
Center for Law & Justice
We work to educate the American public and Congress about legal issues in order to advance the interests of Israel and the Jewish people.
We assist American victims of terrorism in vindicating their rights under the law, and seek to hold terrorists and sponsors of terrorism accountable for their actions.
We fight anti-Semitism and anti-Israel bias in the media and on college campuses.
We strive to enforce existing law and also to create new law in order to safeguard the rights of the Jewish people in the United States and Israel.
Our Mission
ZOA STATEMENT
The ZOA speaks out for Israel – in reports, newsletters, and other publications. In speeches in synagogues, churches, and community events, in high schools and colleges from coast to coast. In e-mail action alerts. In op-eds and letters to the editor. In radio and television appearances by ZOA leaders. Always on the front lines of pro-Israel activism, ZOA has made its mark.
Related Articles
OP-ED ZOA’s Klein Landmark Testimony on Muslim Antisemitism

A New York Times spokesperson has responded hours later to a Breitbart News investigation into racist and antisemitic comments one of its political editors made on Twitter, saying the comments violate the newspaper’s standards and it is considering what to do next. The statement, provided to The Wrap and quoted on Twitter by CNN writer […]