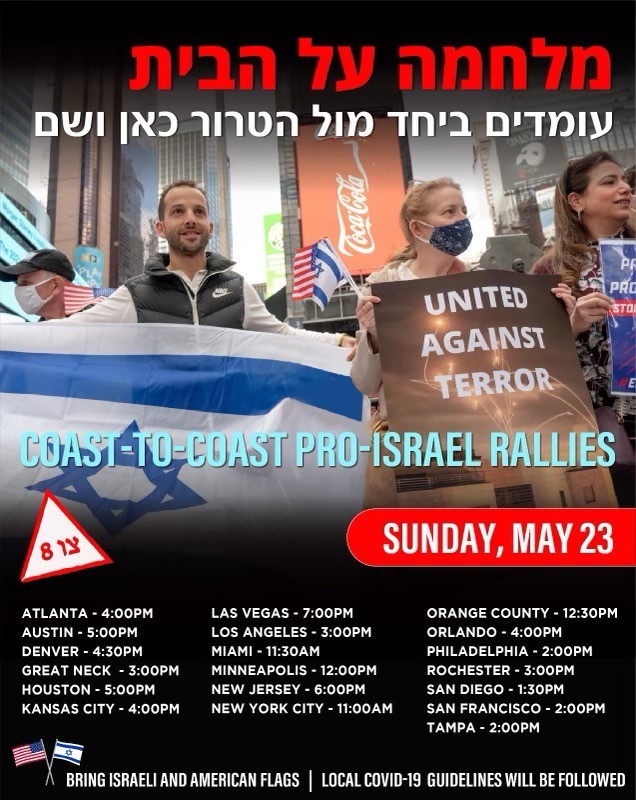 Join Us! Rally at NYC World Trade Center this Sunday 11 AM Against Terror and Antisemitism
Action Alerts News Press Release

A rally is set for 11 am this Sunday, May 23, at 7 World Trade Center in response to a wave of antisemitic attacks nationwide and to stand with Israel in its battles against terrorists.

The Ground Zero rally, “United Against Antisemitism. United Against Terror. United for Us” will take place at the corner of Barclay and Greenwich streets, led by the Israeli-American Council (IAC) New York Region with 100 Tri-State Jewish community organizations. The IAC is simultaneously leading 16 other rallies from coast to coast expected to bring many thousands of people, as antisemitic hate crimes are rising nationwide amid the current wave of Mideast violence.

“A cease-fire does not put an end to the unprecedented attacks against Israel in the U.S. and against our community. We must protect and defend our families both here and in Israel,” said IAC Co-founder and CEO Shoham Nicolet.

The Great Neck event will be at 3 PM Sunday, at Grace Ave. Park.

The NJ rally will be in Tenafly, at Roosevelt Commons, at 6 pm.

IAC officials plan to lay blue and white flowers – showing Israel’s national colors – at the World Trade Center memorial, and to march from the site to the Museum of Jewish Heritage – A Living Memorial to the Holocaust in nearby Battery Park afterward, creating a powerful symbol linking the destruction of European Jewry to contemporary efforts to target Jews and other innocent victims.

The IAC chose the World Trade Center as a gathering spot because the site reflects America’s own history of being targeted by hatred.

“The World Trade Center is a powerful symbol of America’s resilience and resolve against hatred and terrorism, just as the people of Israel stand strong in the face of terrorism and hate,” said Nicolet. “We call on New Yorkers of all backgrounds to join us at Ground Zero, and show a unified front against antisemitic hatred and terror, here and in Israel.”

We would love to hear from you! Please fill out this form and we will get in touch with you shortly.
Trending Z
News May 21, 2021
At ZOA Gala Secy Pompeo Gave the Greatest, Most Pro-Israel Speech Ever Delivered by a Public Official
News May 21, 2021
Dershowitz in Arutz 7: NYC’s Temple Emanu-El Silences a Pro-Israel Voice & Promotes an Anti-Israel Voice
Uncategorized May 21, 2021
Jewish Press: Has Deborah Lipstadt Undercut Both Herself and Future Antisemitism Envoys?
News May 21, 2021
NEW YORK POST: Democratic Leaders’ Shocking Silence Over Attacks on Israel by Fellow Dems
Our Mission
ZOA STATEMENT
The ZOA speaks out for Israel – in reports, newsletters, and other publications. In speeches in synagogues, churches, and community events, in high schools and colleges from coast to coast. In e-mail action alerts. In op-eds and letters to the editor. In radio and television appearances by ZOA leaders. Always on the front lines of pro-Israel activism, ZOA has made its mark.
Center for Law & Justice
We work to educate the American public and Congress about legal issues in order to advance the interests of Israel and the Jewish people.
We assist American victims of terrorism in vindicating their rights under the law, and seek to hold terrorists and sponsors of terrorism accountable for their actions.
We fight anti-Semitism and anti-Israel bias in the media and on college campuses.
We strive to enforce existing law and also to create new law in order to safeguard the rights of the Jewish people in the United States and Israel.
Related Articles
OP-ED Action Alert: Call Your Representative and Urge Them To Remove Anti-Semitic Omar from the House Foreign Affairs Committee