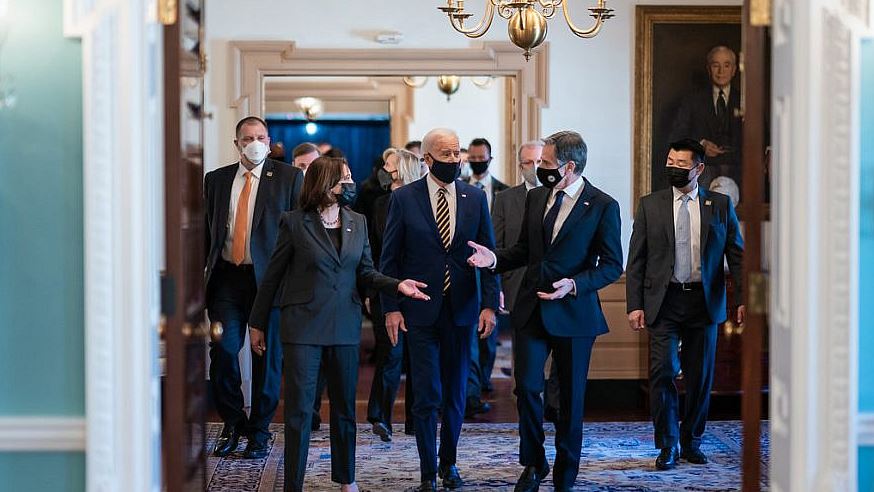 Applauds Biden for Proclaiming the Truth: There Can Be No Peace Until Arabs Accept Israel’s Existence as a Jewish State

The Zionist Organization of America thanks President Joe Biden, Vice President Kamala Harris, Sec’y of State Antony Blinken, and First Gentleman Douglas Emhoff for condemning the hundreds of recent despicable antisemitic attacks against the Jewish community in the U.S. and around the world. Those attacks have mostly been perpetrated by Arab Muslims. ZOA hopes that President Biden and his administration will follow up on their condemnations with specific actions to stop these frightening antisemitic attacks, including employing FBI and other federal resources to bring the perpetrators of these attacks to justice, and steps comparable to the multiple actions that the Biden administration recently took to address African American and Hispanic American attacks against the Asian American community.

President Biden tweeted: “The recent attacks on the Jewish community are despicable, and they must stop. I condemn this hateful behavior at home and abroad—it’s up to all of us to give hate no safe harbor.” VP Kamala Harris tweeted: “The surge in anti-Semitic attacks against the Jewish community in the U.S. and around the world is despicable—it must be called out, condemned, and stopped. As a country, we must stand united against hate of any kind.” First Gentleman Emhoff tweeted: “The horrific rise in anti-Semitic attacks against the Jewish community is reprehensible. Acts of hatred have no place in our society. We must stand together and reject hate and bigotry in all its forms.” Secretary Blinken tweeted: “When hateful ideology rises, violence is never far behind. I join @POTUS in condemning anti-Semitic attacks at home and around the world. We have a responsibility to do everything we can to stop hate in all its forms.”

ZOA urges President Biden to now take these steps to implement these sentiments to give antisemitic hate no harbor:

(1) Appoint and authorize FBI and federal task forces to investigate and help bring to justice the perpetrators of these hateful attacks against innocent Jews.

(3) Make a formal speech opposing antisemitism, similar to former President Trump’s 2019 State of the Union address publicly condemning “the vile poison of antisemitism and those who spread its venomous creed” and featuring survivors of these ugly attacks.

(4) Appoint a strong Combatting Antisemitism Envoy, who has a proven record of standing up against antisemitism from all quarters—including neo-Nazis/white supremacists, hard leftists, and the scourge of Islamist/Arab antisemitism.

(5) Increase enforcement of Title VI of the Civil Rights Act of 1964, to protect Jewish students on college campuses. The antisemitic, Israelophobic incitement and attacks against Jews by the hate group “Students for Justice in Palestine” (SJP) on college campuses is a prime breeding ground for the hateful physical attacks that we are now experiencing against Jews on the streets of New York, Los Angeles, and cities throughout the country.

(6) Investigate and take steps to curb the use of TikTok and other social media platforms to incite antisemitic violence.

(7) Include information on perpetrators and their affiliations in FBI hate crimes data. This will significantly improve the usefulness of such data.

(8) Publicly condemn the antisemitic statements by members of Congress, including Ilhan Omar, Rashida Tlaib, Alexandria Ocasio-Cortez, Betty McCollum, Pramila Jayapal, Bernie Sanders, Cori Bush, Jamal Bowman, and remove these antisemites from their Congressional committees. Their lies and ugly messaging is inciting violence against Jews throughout the country and the world as well as promoting irrational hatred of our greatest ally, the Jewish State of Israel.

(9) End “Critical Race Theory” (CRT) and other divisive educational programs that encourage antisemitism and hatred of people based on the color of their skin, religion or national origin. Restore education that unites all Americans.

(10) Take steps, including education and speeches, to end the multiple blood libels and calumnies that falsely blame Israel, the “settlements” (Jewish homes in the Jewish homeland of Judea/Samaria and eastern Jerusalem) and the lack of a Palestinian Arab State (nonsensethey have been offered a State five times from 1937 to 2008 that was rejected each time because it required accepting Israel) for the lack of peace in the Middle East. When in fact the problem, as President Biden said, is not accepting Israel as a Jewish State within any borders. These blood libels incite violence against Jews throughout the world.

(11) Pre-condition any foreign funding (including to the Palestinian Authority or Gaza) on Palestinian leaders ending incitement and Jew-hatred. (See “ZOA Urges Biden: Don’t Get Closer to or Provide Funds to Abbas’ PA or to Hamas’ Gaza Without Anti-Terror Conditions Met,” May 25, 2021.)

Action Alert to Our Great ZOA Activists: Email (here) or Call the White House at 1-202-456-1414 (Switchboard) or 1-202-456-1111 (Comments) to thank the President for tweeting condemnation of antisemitic attacks on the Jewish community, and to ask him to now take the above actions. (Please email any responses to liz@zoa.org.)

We would love to hear from you! Please fill out this form and we will get in touch with you shortly.
Trending Z
News May 26, 2021
At ZOA Gala Secy Pompeo Gave the Greatest, Most Pro-Israel Speech Ever Delivered by a Public Official
News May 26, 2021
Dershowitz in Arutz 7: NYC’s Temple Emanu-El Silences a Pro-Israel Voice & Promotes an Anti-Israel Voice
Uncategorized May 26, 2021
Jewish Press: Has Deborah Lipstadt Undercut Both Herself and Future Antisemitism Envoys?
News May 26, 2021
NEW YORK POST: Democratic Leaders’ Shocking Silence Over Attacks on Israel by Fellow Dems
Our Mission
ZOA STATEMENT
The ZOA speaks out for Israel – in reports, newsletters, and other publications. In speeches in synagogues, churches, and community events, in high schools and colleges from coast to coast. In e-mail action alerts. In op-eds and letters to the editor. In radio and television appearances by ZOA leaders. Always on the front lines of pro-Israel activism, ZOA has made its mark.
Center for Law & Justice
We work to educate the American public and Congress about legal issues in order to advance the interests of Israel and the Jewish people.
We assist American victims of terrorism in vindicating their rights under the law, and seek to hold terrorists and sponsors of terrorism accountable for their actions.
We fight anti-Semitism and anti-Israel bias in the media and on college campuses.
We strive to enforce existing law and also to create new law in order to safeguard the rights of the Jewish people in the United States and Israel.
Related Articles
OP-ED Action Alert: Call Your Representative and Urge Them To Remove Anti-Semitic Omar from the House Foreign Affairs Committee