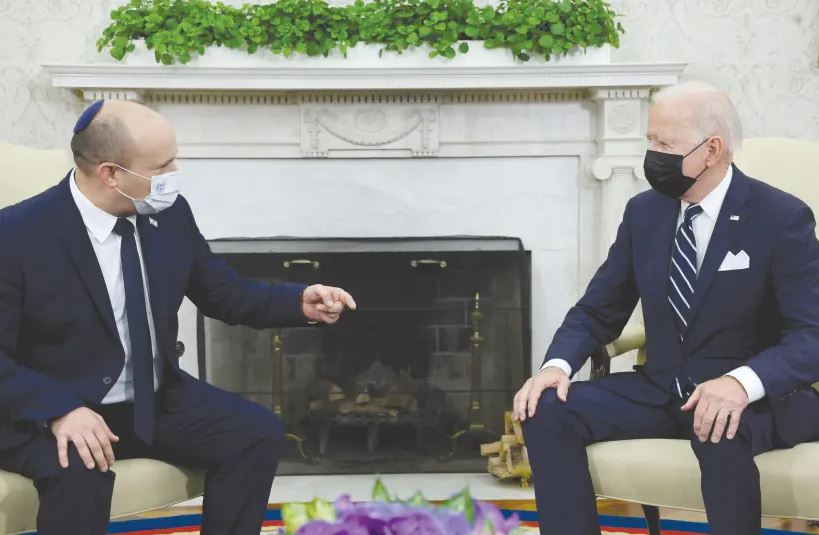 (OCTOBER 20, 2021 / JERUSALEM POST) Since last spring, the Biden administration has pressured Israel to allow the U.S. to reopen a separate consulate, solely for Palestinian Arabs, in the heart of Israel’s capital, Jerusalem.

Since last spring, the Biden administration has pressured Israel to allow the U.S. to reopen a separate consulate, solely for Palestinian Arabs, in the heart of Israel’s capital, Jerusalem.

Recently, U.S. Secretary of State Antony Blinken insisted that the U.S. will move forward with reopening a “Palestinian” consulate – even though the previous day, Justice Minister Gideon Sa’ar announced Israel’s firm opposition to such a consulate.

A U.S. Palestinian Arab consulate would violate the Jerusalem Embassy Act, which recognizes Jerusalem as Israel’s capital and unified city, and would enable the Palestinian Authority to violate the Oslo Accords’ prohibition on the PA carrying on foreign relations.

Former secretary Mike Pompeo and ambassador David Friedman confirmed that a U.S. consulate for Palestinian Arabs would be illegal, counterproductive and send a terrible message.

At the Biden-Bennett meeting in Washington on August 27, President Joe Biden also demanded Israeli “restraint” regarding building in “settlements” – meaning Jewish homes and communities in Judea/Samaria and Jerusalem. The Biden administration reiterated those demands every week since then.

Biden’s demand that only Jews must curtail building homes in the Jewish homeland – while Palestinian Arabs can build as they please – is blatant antisemitic discrimination, which would be illegal under numerous U.S. laws, including Florida’s and New York’s housing discrimination and human rights laws.

Jewish building freezes merely whet Palestinian Arab leaders’ appetite for more unilateral Israeli concessions, thereby hindering peace. In November 2009, under pressure from the Obama-Biden administration, Benjamin Netanyahu agreed to a 10-month building freeze. The freeze was supposed to jump-start Israel-PA negotiations. Instead, PA/PLO dictator Mahmoud Abbas refused to even meet for nine months; then met briefly for show, walked out and demanded yet another freeze.

Freezes on Jewish building in Judea/Samaria and Jerusalem would be especially detrimental now. Aliyah is way up. Jews face dramatically increasing worldwide antisemitism. Thousands are finally realizing the 2,000-year-old dream to return to the Jewish homeland. In 2020, over 20,000 Jews moved to Israel from 70 foreign countries. Aliyah in 2021 is record-breaking. More building is needed to house Jews returning home – not less.

Pressuring Israel to freeze building also violates Israel’s sovereign right to Judea, Samaria and Jerusalem under binding international law (including the Mandate, San Remo Resolution, Anglo-American treaty and UN Charter). In 2019, the U.S. acknowledged that Jewish communities in Judea/Samaria are legal. Jews moreover have the moral and historic right to these areas. Jewish kingdoms reigned here for hundreds of years. Jews have lived here for thousands of years.

In addition, building in the E1 corridor connecting Jerusalem with Jerusalem suburb Ma’aleh Adumim would help stop Arab attacks on Jews traveling back and forth to their homes.

The Biden administration’s demands reflect the will of Biden’s slew of anti-Israel appointees: Reema Dodin justified and encouraged suicide bombings against Jews, organized anti-Israel rallies, and spread anti-Israel blood libels; Samantha Power enabled the passage of extreme anti-Israel UN Security Council Resolution 2334, and called for the U.S. to give the PA terrorist regime a “protection force” against Israel; Deputy Assistant Secretary for Israeli-Palestinian Affairs Hady Amr wrote he “was inspired by the Palestinian intifada” (the terrorist war in which Arab terrorists murdered or maimed 10,000 Jews); National Security Council official Maher Bitar supports BDS and ran a seminar on how to demonize Israel – to name just a few. (See more at ZOA’s Biden Appointments Watch.)

Concerningly, Bennett appears to be at least partly appeasing Biden’s demands, including by offering to limit building in Judea/Samaria to “natural growth” and by delaying building approval meetings – a de facto freeze.

We would love to hear from you! Please fill out this form and we will get in touch with you shortly.
Trending Z
News October 25, 2021
ZOA Condemns U.S. State Dept. & U.S. Amb. Nides For Siding with Antisemitic, Discriminatory Palestinian & Hamas Terrorists re: the Temple Mount, Violating Jews’ Religious Freedom
News October 25, 2021
ZOA’s Klein JPost Op-Ed: There is Nothing Extreme About Israel’s New Government
Uncategorized October 25, 2021
FLASH: ISRAEL-JORDAN PEACE TREATY (1994) GUARANTEES JEWS ACCESS TO THE TEMPLE MOUNT – LET MY PEOPLE PRAY
Uncategorized October 25, 2021
ZOA Analysis: Most American Rabbis Who Are Boycotting Some Israeli Ministers Are From Extremist Left Wing Groups (J Street; T’ruah; JVP)
Center for Law & Justice
We work to educate the American public and Congress about legal issues in order to advance the interests of Israel and the Jewish people.
We assist American victims of terrorism in vindicating their rights under the law, and seek to hold terrorists and sponsors of terrorism accountable for their actions.
We fight anti-Semitism and anti-Israel bias in the media and on college campuses.
We strive to enforce existing law and also to create new law in order to safeguard the rights of the Jewish people in the United States and Israel.
Our Mission
ZOA STATEMENT
The ZOA speaks out for Israel – in reports, newsletters, and other publications. In speeches in synagogues, churches, and community events, in high schools and colleges from coast to coast. In e-mail action alerts. In op-eds and letters to the editor. In radio and television appearances by ZOA leaders. Always on the front lines of pro-Israel activism, ZOA has made its mark.
Related Articles
OP-ED BY: Cindy Grosz ZOA Washington Mission Once Again A Success – Cindy’s Corners | Cindy Grosz |

(JUNE 24, 2021 / JNS) As a two-degree alumnus of Temple University in Philadelphia and national president of the Zionist Organization of America, I cannot remain silent regarding the recent appointment of Dr. Jason Wingard—chair of the anti-Israel, antisemitic Tides Foundation—to be Temple University’s next president. Under Wingard’s leadership, Tides has been funding and elevating organizations and individuals […]