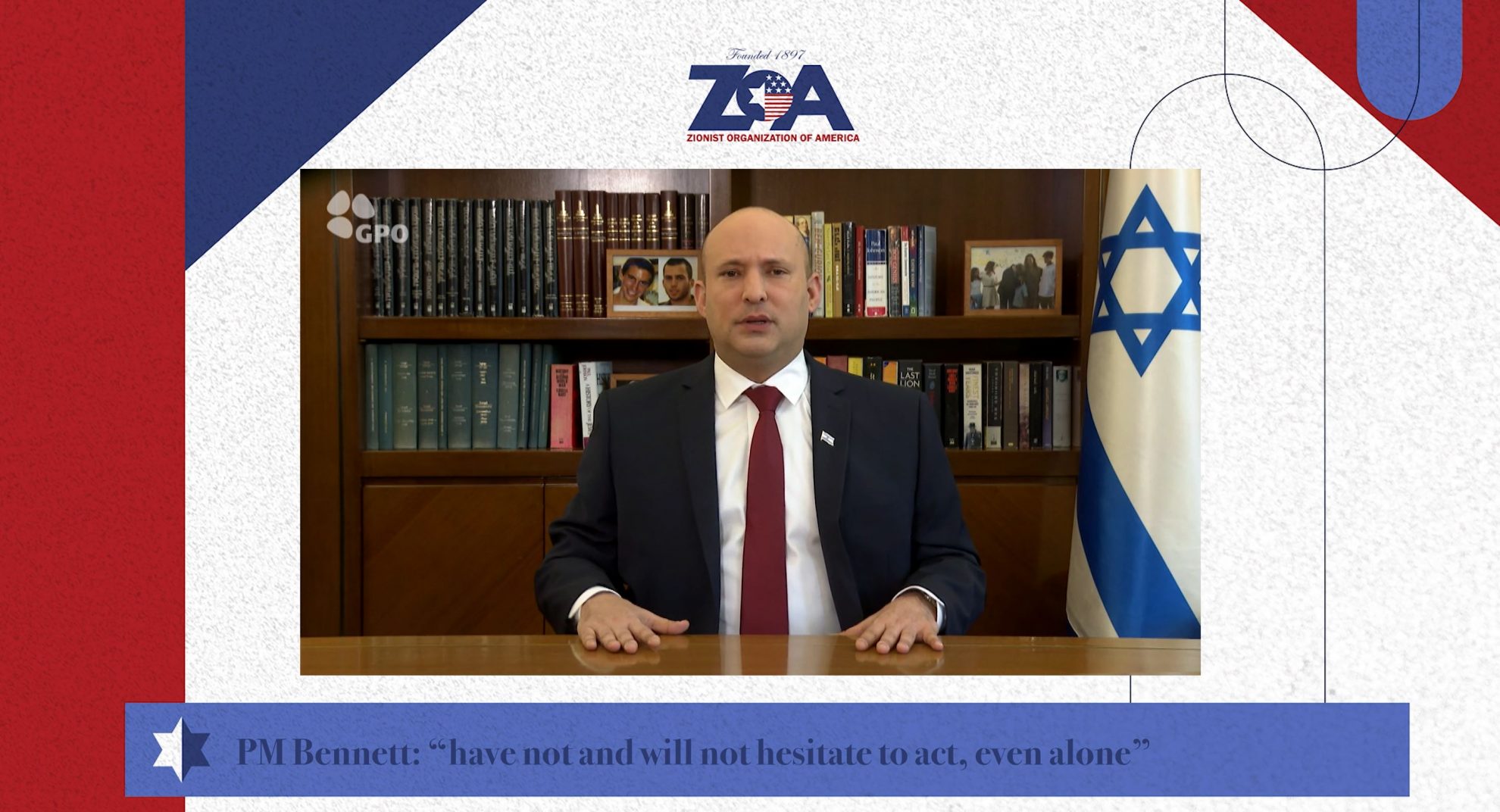 Speaking at the 2021 virtual gala of the Zionist Organization of America on Sunday, Bennett said that Iran only understands force and that the United States and its allies should take the matter to the U.N. Security Council and urge them to act.

“The government I’m leading with its wide range of diverse voices is working hard to strengthen and improve our standing in the world. As I utter these words, Iran continues relentlessly to plot against the State of Israel and the Jewish people,” said Bennett.

“The ayatollahs sitting in Tehran foolishly think that they can sit in their cozy seats in their fancy homes and wreak havoc across the region with zero accountability,” he said. “I’m here to say to them that under my leadership, Iranian aggression will be met with the full weight of Israel’s force.”

Bennett also said that America and its allies should double down on economic sanctions against Iran.

“They’re much more vulnerable than they seem and displays of force greatly impact them,” he said.

Meanwhile, the prime minister stated that he won’t hesitate to act against Iran alone.

“As in any other dictatorial, oppressive regime, many of Iran’s victims are their own people,” said Bennett. “While the people of Iran suffer from poverty, the IRGC [Islamic Revolutionary Guard Corps] are sending unimaginable amounts of money to fund their proxy terror groups in Lebanon, Iraq, Yemen, Syria, and, of course, in Gaza, and Judea and Samaria. I witnessed as all these places rapidly became failed states, a fact directly attributable to Iran.”

The Gaza Strip, he said, was a perfect example of that because when Israel uprooted its own citizens in 2005, the Palestinians could have worked towards economic success. Instead, they continued to choose to use money to purchase weapons and fund terror activities—namely, launching thousands of rockets from Hamas and Islamic Jihad to target Israeli civilians.

“I will never put my people in danger for the sake of experimenting with initiatives that are bound to fail,” said Bennett. “When the so-called moderate leaders of the P.A. [Palestinian Authority] still pay to slay, when they attempt to go after our soldiers at the ICC [International Criminal Court]—our soldiers—this is simply a non-starter.”

‘People everywhere believe in bright future of the Jewish state’

The second half of Bennett’s speech was focused on Israel’s success, despite the world’s struggle with the ongoing coronavirus pandemic.

Bennett said that Israel successfully defeated the Delta variant of the coronavirus without lockdowns, closing any businesses or schools. This allowed Israel’s economy to grow at what the prime minister called a “staggering pace.”

“This is happening because people everywhere believe in the bright future of the Jewish state,” he said.

Nevertheless, at a press conference on Monday, Bennett hinted at future COVID-19 restrictions and the dangers of the new Omicron variant, saying that he believes that many Israelis will “unfortunately be infected” with the new strain.

Bennett was the gala’s final speaker, being honored with the Myron Zimmerman Award for Distinguished Statesmanship.

He was introduced by businessman and philanthropist Henry Schwartz, a former ZOA Board member and treasurer.

“The position of the prime minister is truly an elevated one. It brings with it the responsibility of the state, our people and nation in the fullest range of arenas—both in our homeland and the Diaspora,” said Schwartz. Mr. Prime Minister, you have showed leadership and courage throughout your career. In the IDF [Israel Defense Forces] as a decorated officer, leading valiant military operations, as an entrepreneur who embodies the best of our startup nation, and as a political figure who has strived for unity.”

The gala was the second time Bennett has addressed the ZOA, having spoken at the 2016 ZOA gala when he served as minister of education and diaspora affairs in the government of former Prime Minister Benjamin Netanyahu.

We would love to hear from you! Please fill out this form and we will get in touch with you shortly.
Trending Z
News December 21, 2021
At ZOA Gala Secy Pompeo Gave the Greatest, Most Pro-Israel Speech Ever Delivered by a Public Official
News December 21, 2021
Dershowitz in Arutz 7: NYC’s Temple Emanu-El Silences a Pro-Israel Voice & Promotes an Anti-Israel Voice
Uncategorized December 21, 2021
Jewish Press: Has Deborah Lipstadt Undercut Both Herself and Future Antisemitism Envoys?
CLJ December 21, 2021
ZOA Letter to Jason Wingard, President, Temple U, Concerning an Antisemitic Incident
Center for Law & Justice
We work to educate the American public and Congress about legal issues in order to advance the interests of Israel and the Jewish people.
We assist American victims of terrorism in vindicating their rights under the law, and seek to hold terrorists and sponsors of terrorism accountable for their actions.
We fight anti-Semitism and anti-Israel bias in the media and on college campuses.
We strive to enforce existing law and also to create new law in order to safeguard the rights of the Jewish people in the United States and Israel.
Our Mission
ZOA STATEMENT
The ZOA speaks out for Israel – in reports, newsletters, and other publications. In speeches in synagogues, churches, and community events, in high schools and colleges from coast to coast. In e-mail action alerts. In op-eds and letters to the editor. In radio and television appearances by ZOA leaders. Always on the front lines of pro-Israel activism, ZOA has made its mark.
Related Articles
OP-ED BY: Joshua Needleman ZOA & Penn Middle East Center Plan Meeting Over Breaking the Silence Event – Jewish Exponent