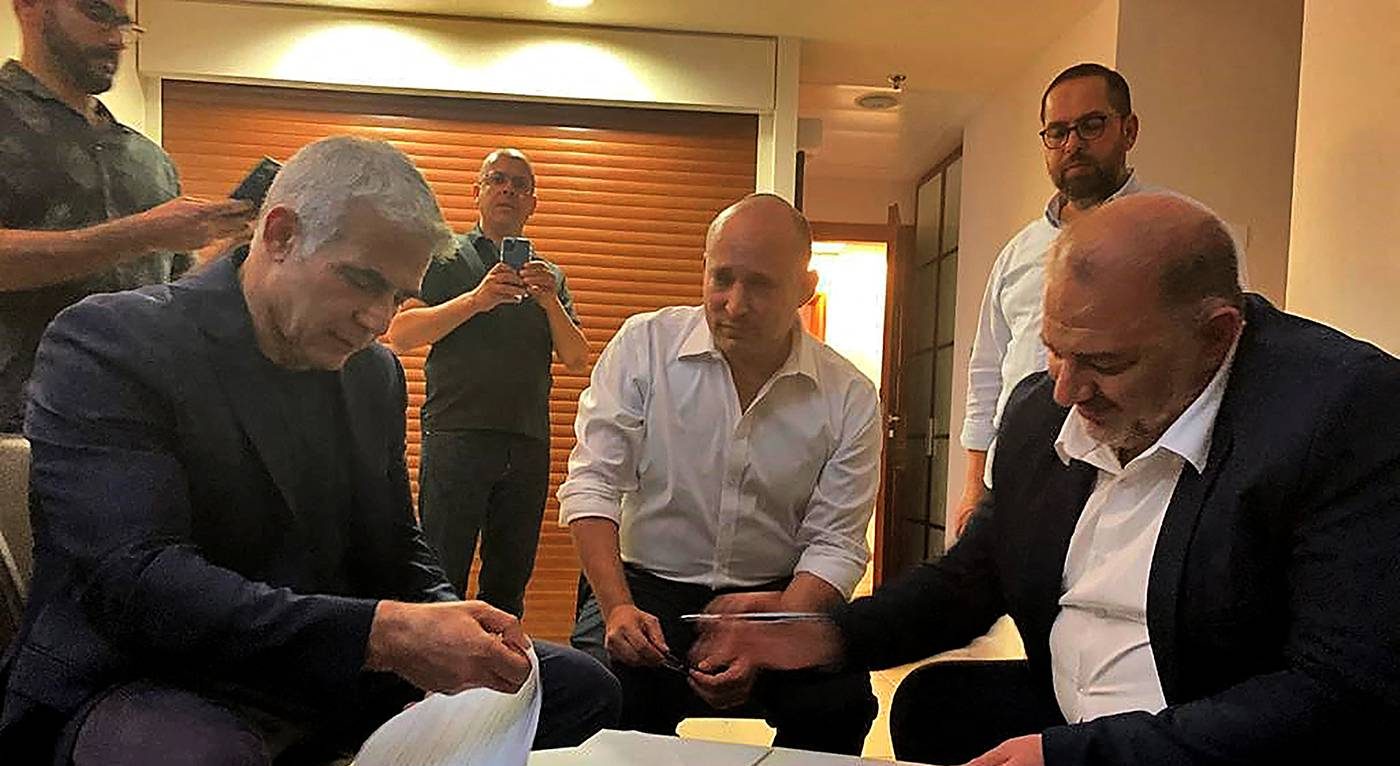 The ZOA congratulates my friend and ZOA’s friend, Yamina (Right) party leader Naftali Bennett, on becoming Prime Minister of the Jewish State of Israel, and our friends Gideon Sa’ar and Ayelet Shaked on their anticipated important roles in a new coalition government. Nevertheless, we do have serious concerns.

We ZOA-ers have a wonderful and special remembrance that at ZOA’s 2016 Gala Dinner, then-Minister of Education and Diaspora Affairs Naftali Bennett quoted a statement by Jewish leader Simon the Hasmonean from over 2,000 years ago: “We did not take a foreign land and did not rule the property of strangers; rather, the land of our fathers was taken unjustly, and now that we have the opportunity, we have returned it to ourselves.” Minister Bennett then added that “one cannot occupy his own home,” as 1,200 ZOA Gala attendees wildly cheered and applauded.

We hope and pray that—despite the far-left wing, anti-religious (Meretz) and Arab-Muslim Brotherhood offshoot (Ra’am) partners in his new coalition—that in his new post, Prime Minister Bennett will (1) uphold his powerfully accurate view that creating a Palestinian Arab terrorist state would be a major danger for Israel; (2) further his staunch and appropriate support for Jewish communities in the Jewish homelands of Judea/Samaria; and (3) continue to oppose any hint of freezing the building of Jewish homes anywhere.

PM Bennett has a moral duty to promote the rational right-of-center agenda that his party and the majority of the Israeli electorate voted for, despite some of his diverse ruling coalition’s left wing, naive positions and unfortunate aversion to Judaism.

Thankfully, virtually all of the members of the new coalition support doing everything necessary to keep the terrorist, Jew-hating, America-hating, genocidal Islamic Republic of Iran from ever developing nuclear weapons, including by opposing the catastrophic Iran deal.

We wish Prime Minister Bennett well on navigating the serious issues that Israel faces, including dealing with U.S. President Biden’s numerous hostile-to-Israel appointments; Biden’s efforts to re-enter the catastrophic Obama Iran deal; Biden’s strong efforts to establish a Palestinian Arab terror state; Biden’s funding of the Palestinian Authority terrorist regime; the newly-energized terrorist Hamas regime which is openly committed to destroying Israel and murdering all Jews; the Palestinian Authority’s refusal to even negotiate, while the PA continues to pay Arabs to murder Jews; the outrageous antisemitic ICC investigation of Israel; the economy after recovering from the Chinese virus; and the new danger of disloyal antisemitic Israeli Arabs physically and verbally attacking their innocent Israeli Jewish neighbors, burning synagogues and Jewish schools, breaking into Jewish homes, and destroying Jewish-owned cars and apartment buildings.

ZOA is deeply concerned that the treasonous Israeli Arab Islamic party Ra’am is included in the new ruling coalition. Ra’am opposes Israel as a Jewish state; opposes Jerusalem as Israel’s capital; opposes the Abraham Accords; calls for a so-called Arab “right of return” to overrun Israel; and calls Zionism racism. In 2019, Ra’am Member of Knesset Walid Taha sided with Hamas over Israel, by accusing Israel of an “aggressive” “policy of escalation” for defending itself against Hamas attempts to breach the border and murder Israelis. And only today, Ra’am leader Mansour Abbas threateningly proclaimed, only in Arabic, that his party “would return the lands which were appropriated and taken from our [Arab] people. This is a national act of the highest order.” While in Hebrew he made remarks attempting to falsely assure and comfort Israeli Jews. Ra’am’s four Knesset members in a coalition, holding only 61 seats out of 120, are capable of and could threaten to bring down the new governing coalition any time Israel strongly defends, (in a stronger way that Ra’am may object to,) the Israeli public against rockets and other attacks by Hezbollah, Hamas, or Iran.

The far-left wing Meretz’s six MKs may likewise bring down the new government, and will be an enormous challenge to deal with. For instance, on May 18, Meretz chairwoman Tamar Zandberg resubmitted her absurd, anti-religious proposed legislation to criminalize and send to jail Chabad members for Jewish outreach efforts, such as offering young Jews an opportunity to put on tefillin.

We at the Zionist Organization of America extend our best wishes to Prime Minister Naphtali Bennett—B’Hatzlacha—for every success in dealing with the challenges ahead that Israel faces.

We would love to hear from you! Please fill out this form and we will get in touch with you shortly.
Trending Z
News June 13, 2021
ZOA Condemns U.S. State Dept. & U.S. Amb. Nides For Siding with Antisemitic, Discriminatory Palestinian & Hamas Terrorists re: the Temple Mount, Violating Jews’ Religious Freedom
Uncategorized June 13, 2021
FLASH: ISRAEL-JORDAN PEACE TREATY (1994) GUARANTEES JEWS ACCESS TO THE TEMPLE MOUNT – LET MY PEOPLE PRAY
Uncategorized June 13, 2021
ZOA Analysis: Most American Rabbis Who Are Boycotting Some Israeli Ministers Are From Extremist Left Wing Groups (J Street; T’ruah; JVP)
Uncategorized June 13, 2021
Israel’s “Right of Return” Grandparent Clause is De-Judaizing the Jewish State – Eliminate It
Center for Law & Justice
We work to educate the American public and Congress about legal issues in order to advance the interests of Israel and the Jewish people.
We assist American victims of terrorism in vindicating their rights under the law, and seek to hold terrorists and sponsors of terrorism accountable for their actions.
We fight anti-Semitism and anti-Israel bias in the media and on college campuses.
We strive to enforce existing law and also to create new law in order to safeguard the rights of the Jewish people in the United States and Israel.
Our Mission
ZOA STATEMENT
The ZOA speaks out for Israel – in reports, newsletters, and other publications. In speeches in synagogues, churches, and community events, in high schools and colleges from coast to coast. In e-mail action alerts. In op-eds and letters to the editor. In radio and television appearances by ZOA leaders. Always on the front lines of pro-Israel activism, ZOA has made its mark.
Related Articles
OP-ED ZOA to K. Harris: Reverse Your Troubling Positions on Iran, Omar, Israel’s Sovereign Rights