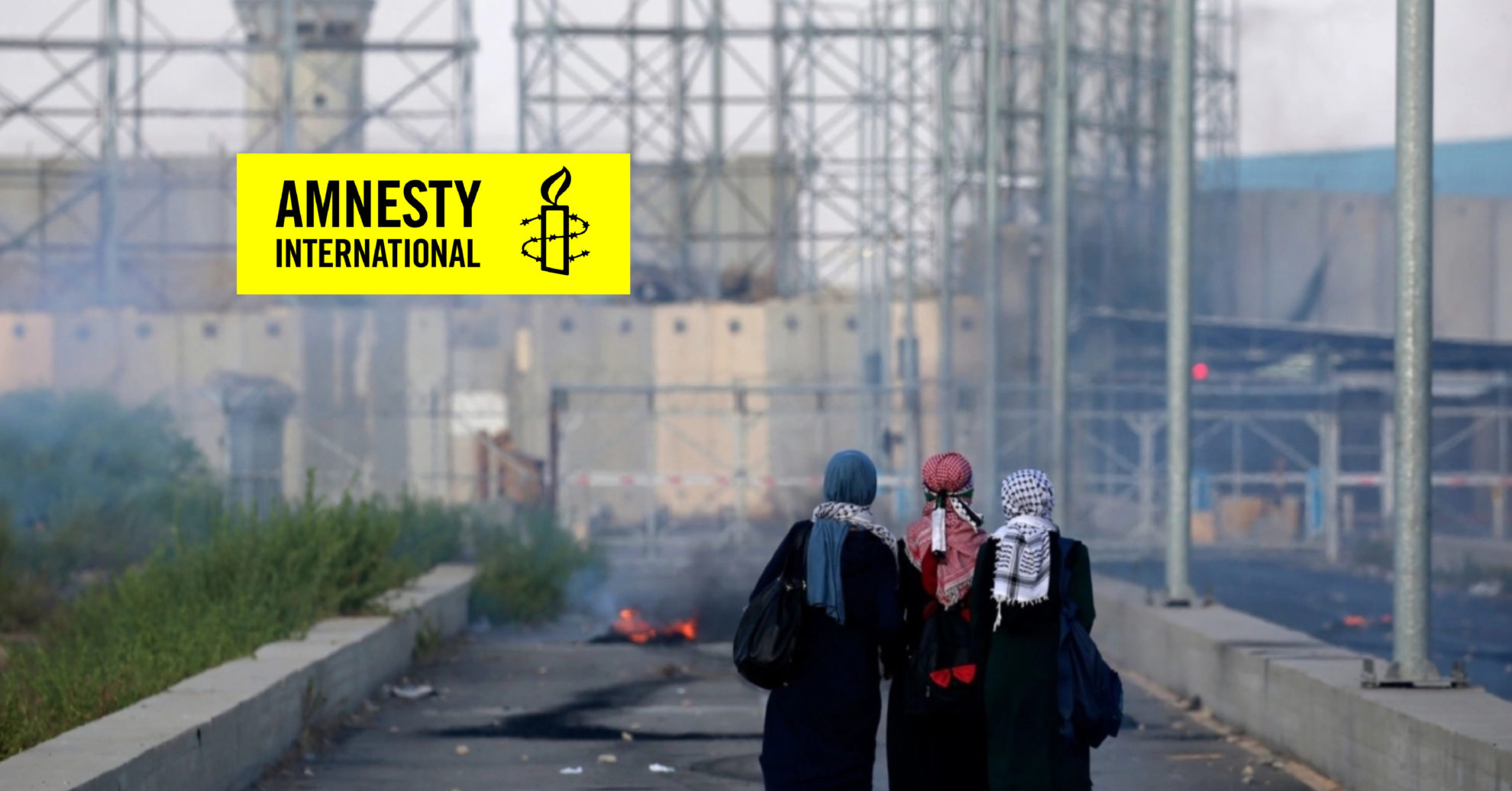 Nazis & the KKK Would Applaud This Report

The latest report from Amnesty International (AI), whose funders include the notorious Jew-hating Israelophobe George Soros, is full of Orwellian, despicable, defamatory, twisted, antisemitic calumnies, and worst of all, promotes a “right” to murder Jews and destroy Israel. The Nazis and the Ku Klux Klan would have applauded this egregious Jew-hating nonsense, which only falsely inspires more hatred and violence against the Jewish State and the Jewish people.

Specifically, the Amnesty International report repeatedly accuses Israel of having “restrictions on the right to popular resistance.”

“Popular resistance” is the well-known, often-used “Palestinian-speak” term that means murdering innocent Jews in stabbing, boulder-throwing, shooting, car-ramming, bombing, rocket and other violent attacks. For instance, after Israeli Arabs in Israeli cities began rioting, burning Jewish synagogues and cars and Jewish homes, looting Jewish homes, and killing and injuring their Jewish neighbors in vicious pogroms in May 2021, the Palestinian Authority’s ruling Fatah party called for “escalating the popular resistance and setting the ground on fire under the occupation’s feet” – meaning escalating those violent, deadly anti-Jewish pogroms.

The Amnesty International report adds even more fuel to the fire by claiming that the “only way” for “Palestinians” to “influence Israeli politics and change political reality in the [so-called] occupied Palestinian territories” is “protest,” and accordingly, the Palestinians have organized “popular resistance,” “popular mobilization,” and the “intifadas” – such as the First and Second Intifadas (e.g., AI Report pages 111-112). The AI report thus legitimizes and promotes these deadly, murderous, inhumane tactics.

“Popular resistance,” “protest,” “popular mobilization,” and the “intifadas” are all in fact synonyms for perpetrating deadly violence against innocent Jews. In the First Intifada, Palestinian Arab terrorists murdered 200 innocent Jews. In the Second Intifada, Arab terrorists murdered 1,100 Jews and maimed 8,000 Jews (including by bombing child-filled pizza stores, a community Seder attended by Holocaust survivors, and a wedding). And in the “knife Intifada” wave of terror ongoing since 2015, Palestinian Arab terrorists have perpetrated thousands of attacks (often hundreds each month), and murdered or maimed well over 1,000 Jews.

Heaping even more fuel on the fire, the AI report then accuses Israel of “brutally repressing” the intifadas! In other words, Israel is at fault for trying to defend her children from being slaughtered by Arab terrorists.

Moreover, the destruction of the Jewish state is the “change in political reality” that Amnesty International claims must be obtained by protecting Palestinians’ “right to popular resistance” (right to murder Jews). The Amnesty International report castigates Israel for not legislating the Jewish State out of existence; for allowing Jews to live on Jewish land; and for not agreeing to allow millions of alleged descendants of the 367,000 Arabs who heeded the Arab Higher Committee’s request to leave Israel in 1948 to “return” to overrun the Jewish state. (The Arab Higher Committee asked Arabs to leave to clear a path for six Arab armies to invade and destroy Israel.)

In a telling interview yesterday revealing the depth of AI’s ugly, cruel, human rights-abusing logic and antisemitic bigotry, a Times of Israel reporter asked, “If I go anywhere over the Green Line and I buy a house, am I now a settler living illegally in East Jerusalem?” Amnesty International’s Middle East and North Africa research and advocacy director, Philip Luther, responded “Yes.”

The AI report also regurgitates other big lies used to vilify and incite violence against Jews and Israel. For instance, the AI report falsely asserts that Jews are “scheming” to “dispossess Palestinians of their properties.” In fact, “Sheikh Jarrah” is simply a case of Arabs who have not paid rent for decades, illegally attempting to remain in proven Jewish-owned properties, when they have no right to do so. See ZOA’s monograph, “The Facts About the Shimon HaTzaddik a.k.a “Sheikh Jarrah” Property Dispute,” which thoroughly debunks the AI report’s lies.  Also, see Dr. Alex Safian’s excellent article, “Amnesty International’s Big Lie About Israel,” debunking the AI report’s false, absurd, long-disproven “apartheid” claims.

Further evidence that the AI report is full of antisemitic, terror-inciting, defamatory lies is the fact that the report’s “sources” are the interconnected web of foreign-funded, vicious, repeatedly-debunked, anti-Israel propaganda and BDS organizations that parade as “human rights” groups, including B’tselem, and affiliates and front groups for the PFLP (a U.S.-designated foreign terror organization), including Addameer, Al-Haq and Defense of Children International-Palestine / DCI-Palestine. AI also frequently sites its own previous false reports as “sources.”

Amnesty International’s report also ignores that the real human rights violators and promoters of “apartheid” are Hamas – whose charter calls for the murder of every Jew and Israel’s complete annihilation, and has launched 25,000 rockets into Israel to murder innocent Jews; and the Palestinian Authority – which pays Arabs $400 million per year of life pensions to Arabs to murder Jews; has laws punishing Arabs who sell land to Jews with the death penalty; names schools streets and sports tournaments after Jew-killers to inspire more anti-Jewish violence and declares that no Jew will be allowed to live in a Palestinian Arab state.

All civilized people should condemn Amnesty International and its dangerous, defamatory Jew-hating report.

We would love to hear from you! Please fill out this form and we will get in touch with you shortly.
Trending Z
News February 3, 2022
New Biden Nominees Opposed Abraham Accords & Involved in Israeli Election Interference
Uncategorized February 3, 2022
ZOA Letter to DOJ & FBI on New “Mapping Project” Antisemitic Threat by ZOA Pres. Morton Klein, Dir. of Research/Special Projects Liz Berney, Esq., Dir. Center for Law & Justice Susan Tuchman, Esq.
News February 3, 2022
ZOA’s Condemnation of Black Lives Matter Defended by JNS’ Tobin: Jews Supporting BLM Empowered Antisemitism
Op-Ed February 3, 2022
ZOA’s Mort Klein JPost Op-Ed: BDS Mapping Project Targets Every Jew, Including Left Wing, Israelophobic Jews
Center for Law & Justice
We work to educate the American public and Congress about legal issues in order to advance the interests of Israel and the Jewish people.
We assist American victims of terrorism in vindicating their rights under the law, and seek to hold terrorists and sponsors of terrorism accountable for their actions.
We fight anti-Semitism and anti-Israel bias in the media and on college campuses.
We strive to enforce existing law and also to create new law in order to safeguard the rights of the Jewish people in the United States and Israel.
Our Mission
ZOA STATEMENT
The ZOA speaks out for Israel – in reports, newsletters, and other publications. In speeches in synagogues, churches, and community events, in high schools and colleges from coast to coast. In e-mail action alerts. In op-eds and letters to the editor. In radio and television appearances by ZOA leaders. Always on the front lines of pro-Israel activism, ZOA has made its mark.
Related Articles
OP-ED ZOA to K. Harris: Reverse Your Troubling Positions on Iran, Omar, Israel’s Sovereign Rights