By Joel B. Pollak

(APRIL 8, 2022 / BREITBART) U.S. Secretary of State Antony Blinken omitted the word “Palestinian” in expressing condolences to Israel over a terror attack in downtown Tel Aviv on Thursday night that claimed the lives of two young Israelis and wounded several more.

Two people were killed when 28-year-old Raad Hazem from the Jenin refugee camp in the West Bank began a shooting spree in downtown Tel Aviv on Thursday night.

Thursday night is the busiest night of the week for recreational activities in Israel, since the five day work week ends that day. Dizengoff Street, one of Tel Aviv’s main thoroughfares, is lined with bars and restaurants that are packed on a Thursday evening.

The gunman first opened fire outside Ilka, a bar with outside seating. The gunman then left the scene and continued shooting through a side street, narrowly missing another man who had left the bar after the attack began.

The gunman was later shot and killed by police in the neighboring city of Jaffa.

Blinken, who had no trouble condemning what he called “settler violence” in his visit last month to Israel, could not bring himself to identity Palestinian terrorism and its ideology as the cause of the terror attack in Israel in a statement Thursday:

Americans are, once again, grieving with the Israeli people in the wake of another deadly terrorist attack, which took the lives of two innocent victims and wounded many more in Tel Aviv. Our hearts go out to the families and other loved ones of those killed, and we wish a speedy recovery to the injured. We are closely following developments and will continue to be in regular contact with our Israeli partners, with whom we stand resolutely in the face of senseless terrorism and violence.

May the memories of those who passed be a blessing. 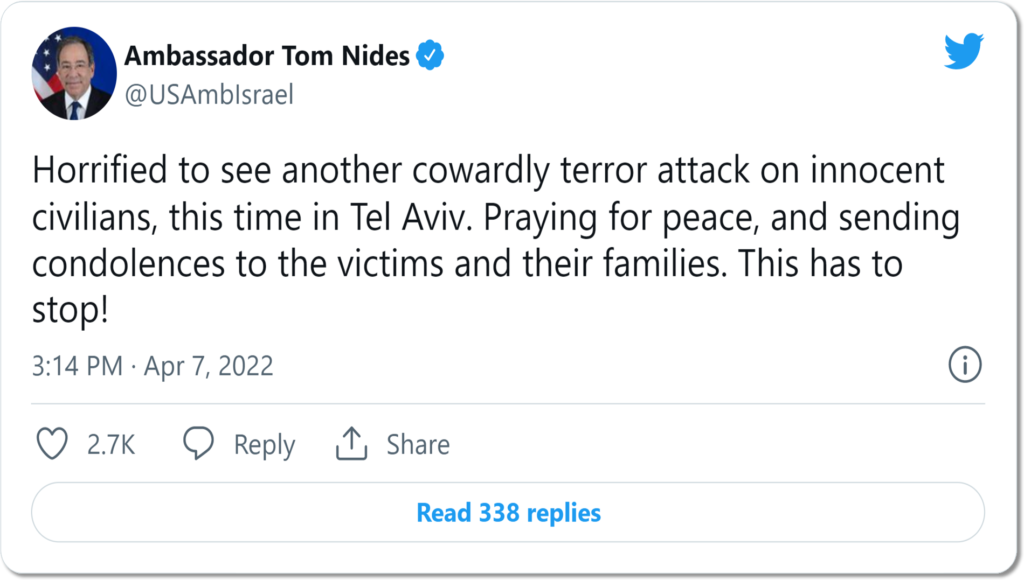 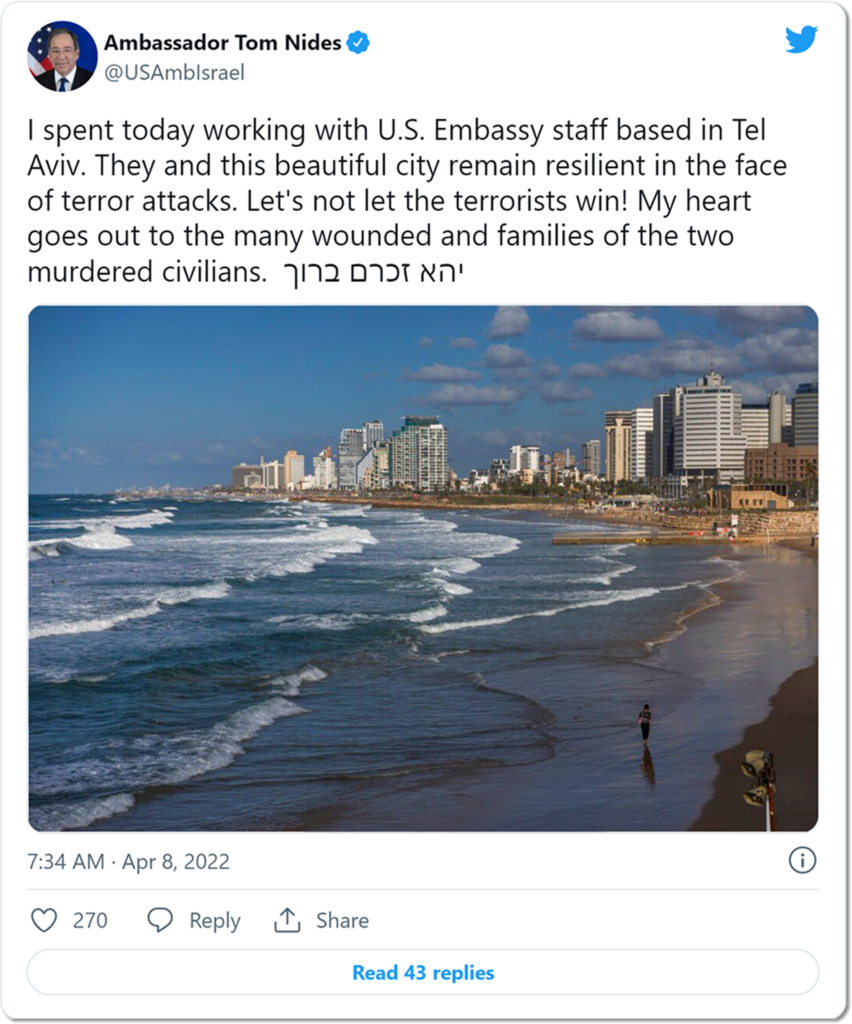 The reference to “embassy staff based in Tel Aviv” reflects the fact that some American diplomatic personnel remained in Tel Aviv when the embassy was formally moved to Jerusalem by President Donald Trump in 2018, a move Democrats opposed.

A search for the word “Palestinian” in the U.S. Ambassador’s Twitter account reveals that the last use of the word was in 2020, when Trump’s appointee, David Friedman, was still in the post. He spoke of efforts to help the Palestinians develop their economy but also did not refrain from identifying “Palestinian terrorists” as the perpetrators of attacks against Israelis.

Joel B. Pollak is Senior Editor-at-Large at Breitbart News.

This article was originally published in Breitbart and can be viewed here.

We would love to hear from you! Please fill out this form and we will get in touch with you shortly.
Trending Z
Uncategorized April 8, 2022
ZOA Analysis: Most American Rabbis Who Are Boycotting Some Israeli Ministers Are From Extremist Left Wing Groups (J Street; T’ruah; JVP)
Uncategorized April 8, 2022
ZOA: Israel’s Reasonable Judicial Reform Proposals Are Good for Democracy, the Rule of Law and the Economy
News April 8, 2022
ZOA is Disappointed, Offended and Frightened by 211 U.S. House Votes Supporting Jew-Hating, Israel-Hating Rep. Ilhan Omar
Uncategorized April 8, 2022
Israel’s “Right of Return” Grandparent Clause is De-Judaizing the Jewish State – Eliminate It
Center for Law & Justice
We work to educate the American public and Congress about legal issues in order to advance the interests of Israel and the Jewish people.
We assist American victims of terrorism in vindicating their rights under the law, and seek to hold terrorists and sponsors of terrorism accountable for their actions.
We fight anti-Semitism and anti-Israel bias in the media and on college campuses.
We strive to enforce existing law and also to create new law in order to safeguard the rights of the Jewish people in the United States and Israel.
Our Mission
ZOA STATEMENT
The ZOA speaks out for Israel – in reports, newsletters, and other publications. In speeches in synagogues, churches, and community events, in high schools and colleges from coast to coast. In e-mail action alerts. In op-eds and letters to the editor. In radio and television appearances by ZOA leaders. Always on the front lines of pro-Israel activism, ZOA has made its mark.
Related Articles
OP-ED ZOA: Pending Senate Res. (S. Res. 6) Condemning UN Security Council Resolution 2334 Must Eliminate Promoting a Palestinian/Hamas State