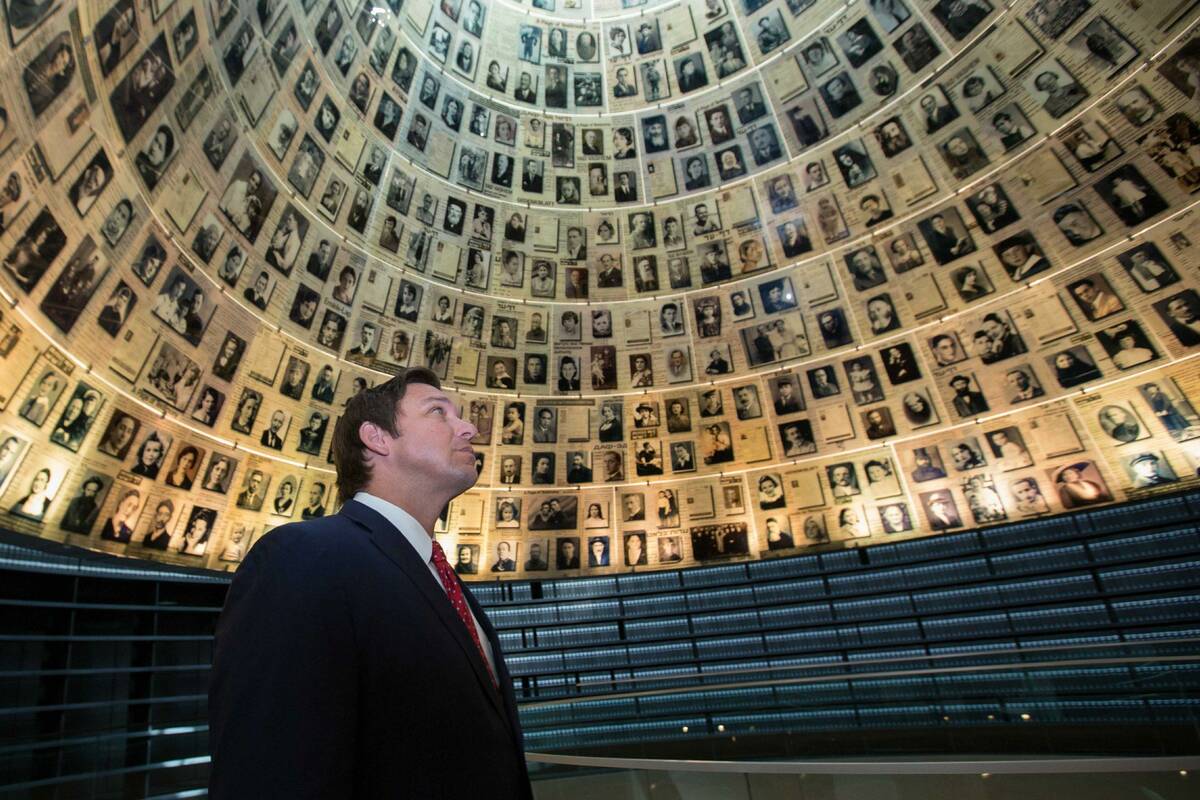 Over the course of many years, we have repeatedly witnessed former Congressman and present Florida Governor Ron DeSantis’ great love, friendship and aid to Israel and the Jewish people. DeSantis would often say to me, “What can we do to help U.S.-Israel relations?” Governor DeSantis played a vital role in prompting the move of the U.S. embassy to Israel’s eternal capital Jerusalem, and obtaining U.S. recognition of Israeli sovereignty over the Golan Heights. He is a leader in combating antisemitic boycotts; enhancing Jewish education; and promoting Israel-Florida trade relations and joint projects. It is thus deeply troubling and destructive that New York’s Museum of Jewish Heritage demanded cancelation of Governor DeSantis’ speech at the upcoming Tikvah Jewish Leadership Conference initially scheduled to take place at the museum, causing the conference to move to another location. (See: “Ron DeSantis Is Persona Non Grata at a Holocaust Memorial,” by Elliott Abrams and Eric Cohen, Wall St. J’nl, May 5, 2022.)

The New York Museum of Jewish Heritage’s stated mission is to combat intolerance and exclusion, in the wake of the Holocaust. To be true to its mission, the museum must immediately apologize/retract cancellation of Governor DeSantis. A governor who has done so much for Israel and the Jewish people should be welcomed with open arms at Jewish institutions.

It is particularly disturbing that a museum that commemorates the Holocaust excluded a leading fighter against antisemitic anti-Israel boycotts. Has the New York Museum of Jewish Heritage forgotten that the first official act of the Nazi regime was an anti-Jewish boycott?

Governor DeSantis’ achievements for our people include:

Especially in a time when Israel has a diminishing number of friends and an increasing number of antagonists both here and abroad, we should fervently embrace and appreciate great friends of Israel and the Jewish people like the extraordinary Governor Ron DeSantis. An immediate apology by the NY Museum of Jewish Heritage is in order.

And the wise policies of Gov. DeSantis that the Museum inappropriately objects to are supported by the majority of Floridians. He is also one of the most popular governors in the country, governing the third largest state in America, with one of the largest and growing Jewish populations.

We would love to hear from you! Please fill out this form and we will get in touch with you shortly.
Trending Z
Uncategorized May 6, 2022
FLASH: ISRAEL-JORDAN PEACE TREATY (1994) GUARANTEES JEWS ACCESS TO THE TEMPLE MOUNT – LET MY PEOPLE PRAY
Uncategorized May 6, 2022
ZOA Analysis: Most American Rabbis Who Are Boycotting Some Israeli Ministers Are From Extremist Left Wing Groups (J Street; T’ruah; JVP)
Uncategorized May 6, 2022
Israel’s “Right of Return” Grandparent Clause is De-Judaizing the Jewish State – Eliminate It
Uncategorized May 6, 2022
Exclusive: ZOA Accuses Ilhan Omar of Hating the U.S. ‘as Much as Israel,’ Lauds Kevin McCarthy for ‘Throwing Her Off the HFAC’
Center for Law & Justice
We work to educate the American public and Congress about legal issues in order to advance the interests of Israel and the Jewish people.
We assist American victims of terrorism in vindicating their rights under the law, and seek to hold terrorists and sponsors of terrorism accountable for their actions.
We fight anti-Semitism and anti-Israel bias in the media and on college campuses.
We strive to enforce existing law and also to create new law in order to safeguard the rights of the Jewish people in the United States and Israel.
Our Mission
ZOA STATEMENT
The ZOA speaks out for Israel – in reports, newsletters, and other publications. In speeches in synagogues, churches, and community events, in high schools and colleges from coast to coast. In e-mail action alerts. In op-eds and letters to the editor. In radio and television appearances by ZOA leaders. Always on the front lines of pro-Israel activism, ZOA has made its mark.
Related Articles
OP-ED BY: ZOA Staff ZOA Condemns Kerry For Supporting Iran’s Outrageous Demands Despite Violations

The Zionist Organization of America (ZOA) has urged all members of the U.S. Senate to cosponsor S. 2474,  a bill that would override a recently issued directive from the Department of Homeland Security’s Customs and Border Protection Bureau, instructing that Israeli-made products manufactured in Judea/Samaria must be labeled as being from the ‘West Bank,’ and […]