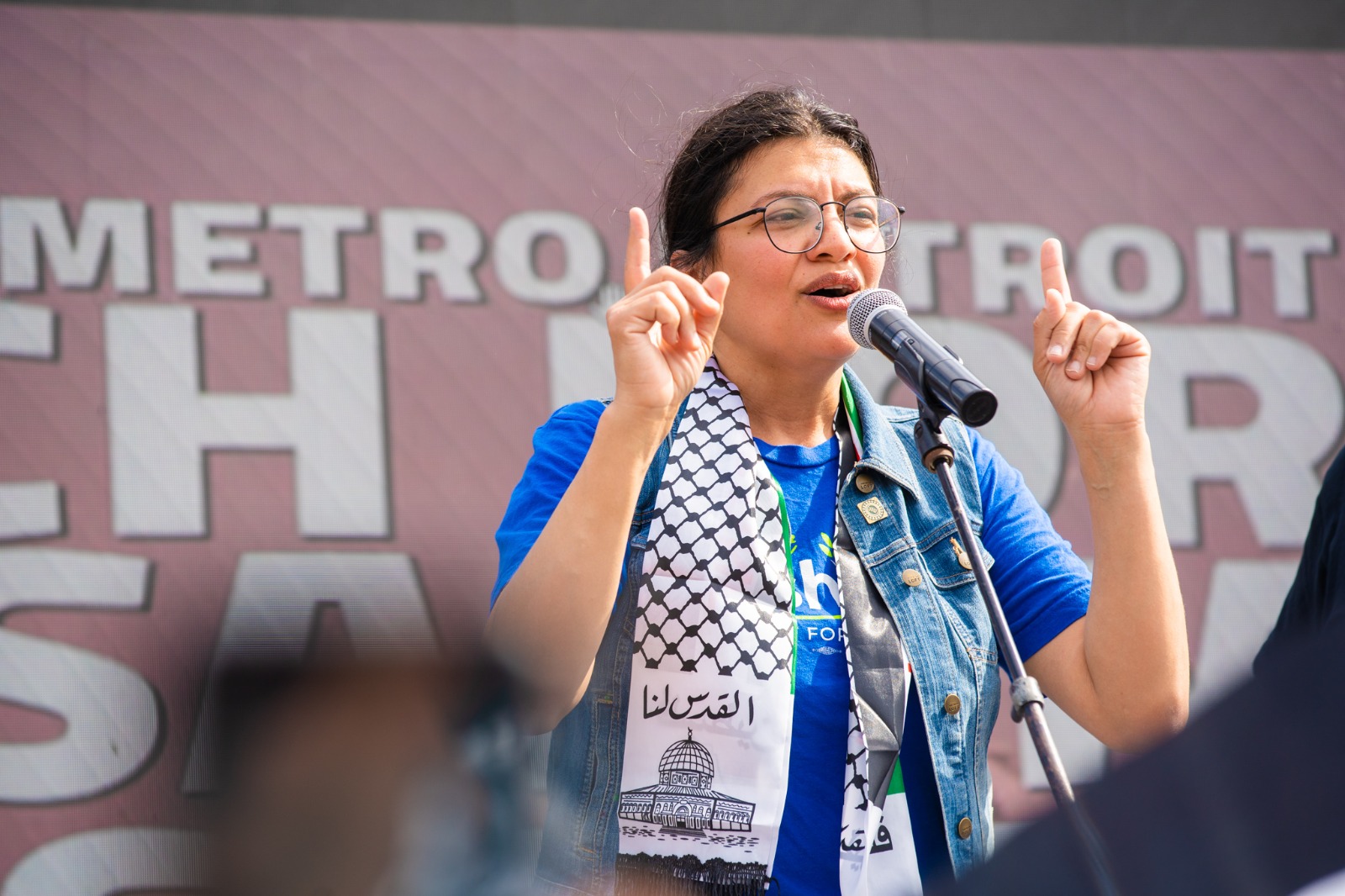 Immediately after the anniversary of Israel’s reestablishment, Democratic “Squad” members Rashida Tlaib (MI), Jamaal Bowman (NY), Alexandria Ocasio-Cortez (NY), Ilhan Omar (MN), Betty McCollum (MN), Marie Newman (IL), and Cori Bush (MO) introduced a pernicious Congressional resolution entitled, “Recognizing the Nakba and Palestinian Refugees’ rights” (H. Res. 1123) to promote lies and hatred against Jews. Ringleader Tlaib’s defamatory resolution falsely claims that 7 million alleged descendants of fraudulent “Palestinian refugees” have the “right” to overrun and annihilate the Jewish state. Tlaib’s resolution also grossly misstates international law; and demands that more U.S. tax dollars must be sent to the corrupt, Hamas-supporting, hatred-teaching UN Relief and Works Agency (UNRWA). No one with a shred of decency or understanding of law or history will ever vote for this resolution; it’s just a hateful propaganda stunt. But it’s also an opportunity for us to, once again, set the record straight about the antisemitic lies that the hateful “squad” is spewing.

The Real Meaning of “Nakba”: Tlaib’s resolution demands that Americans must commemorate the “Nakba” – an Arabic term for “catastrophe.” The “Nakba” is the sick, hateful belief that Jewish survival is a catastrophe. The “Nakba”’s genocidal premise is that it was a catastrophe that local Arab terrorists and six invading Arab armies failed to exterminate every Jew in the reconstituted Jewish state in 1948, to finish the job started by Hitler and anti-Jewish pogroms throughout the Arab world. Arab rioters and terrorists massacred hundreds of Jews in ancient Jewish communities in Jerusalem, Hebron, Tiberias and elsewhere in pre-state Israel in the 1920s-1930s. Local and invading Arabs murdered 6,000 plus Jews in Israel in 1948. And Arab terrorists murdered or maimed thousands of Jews in Intifada terror wars since then. But the “Nakba” holds that all this anti-Jewish terror wasn’t enough. The “Nakba” is the absurd notion that Jews living peacefully in their own lawful, historic, homeland is a catastrophe. Simply put, the “Nakba” is a propaganda lie used to try to transform genocidal Arab aggressors into victims, and promote more hatred and terror against Jews.

At the Celebrate Israel parade on Sunday, a “Nakba” sign appeared next to another Palestinian Arab protestor wearing terrorist gear. It was an apt depiction of how the Nakba is a call for more anti-Jewish terror.

The Tlaib-Squad resolution also includes numerous falsehoods about so-called “Palestinian refugees,” grossly inflates refugee numbers, ignores their origin outside Israel, and ignores that “Palestinian refugees” do not qualify as refugees under U.S. and standard international law. Part 2 of this article also documents that Arab leaders and governments (not Israel) created and perpetuated the “Palestinian refugee crisis”; and that UN General Assembly resolution 194 created no “right of return.”

Tlaib’s Resolution Grossly Inflates Palestinian Arab “Refugee” Numbers; and Ignores their Origins Outside Israel: Rashida Tlaib’s proposed Congressional resolution falsely asserts that there were “at least 750,000” Palestinian Arab refugees from Israel in 1948. Tlaib’s exaggerated number is impossibly high – because it far exceeds the approximately 600,000 Arabs residing in Israel in 1947-48, before some Arabs left – and ignores that many of those Arabs remained in Israel. The best estimate of Arabs who left Israel is approximately 367,000. (See Dr. Pinner’s thorough analysis, discussed in Samuel Katz’s Battleground, pp. 26-27.)

An Obama-era report found that, years ago, there were only about 20,000 Palestinian Arab refugees from the 1948-1949 Arab war against Israel – instead of the 5.3 million that UNRWA was falsely claiming at that time, by fraudulently padding numbers and improperly including descendants. (See “U.S. Report Finds Only 20,000 Palestinian Refugees in the World,” Israel Hayom, July 18, 2018.) The alleged numbers are even fewer or non-existent today – yet Rashida Tlaib’s resolution now absurdly claims that there are 7 million Palestinian Arab refugees today – including 5.7 million (illegitimately) supported by UNRWA. (See also “Morton Klein: Trump Wisely Ends U.S. Funding to UNRWA,” by Morton Klein, Breitbart, Sept. 6, 2018.)

Tlaib’s resolution also ignores the Egyptian, Syrian, Algerian and other Arab national origin of “Palestinian Arabs.” Arabs flooded into Israel in pre-state years to enjoy Jewish pioneers’ development of the previously barren land; to escape Egyptian military drafts and Algerian wars; and to work for the British mandatory government (which discriminated against Jews and instead imported Arab workers). Common “Palestinian” Arab last names are al Masri (meaning from Egypt) and Mughrabi (meaning from North Africa).

Under the U.S. and International Definitions of “Refugees,” Palestinian Arabs Never Qualified as “Refugees”: UNRWA’s unique definition of Palestinian Arab “refugees” counted any Arab who lived or worked in Israel for a mere two years as a “refugee.” UNRWA’s definition is contrary to U.S. law (8 U.S.C. § 1101(a)(42)) and all other international definitions, which require that a refugee must have “habitually resided” in a country to count as a refugee; two years of residence or work does not qualify. In addition, corrupt UNRWA added to its relief rolls hundreds of thousands of Arabs who never lived or worked in Israel, to try to justify contributions to UNRWA and protect thousands of UNRWA jobs. Under a normal definition of refugees, which does not include descendants, there are virtually no Palestinian Arab refugees today.

In addition, the U.S. Immigration and Nationality Act’s “persecutor exception” (also known as the “persecutor bar”) declares that “The term ‘refugee’ does not include any person who ordered, incited, assisted, or otherwise participated in the persecution of any person on account of race, religion, nationality, membership in a particular social group, or political opinion.” 8 U.S.C. §§ 1101(a)(42). International refugee law contains a similar persecutor bar. Thus, no Arab who participated in, incited or assisted in persecuting, attacking or inciting hatred against the Jewish people, at any time, qualifies as a refugee. Arab rioters who attacked their Jewish neighbors in pre-state Israel; government officials, Imams, and teachers who incite or pay Arabs to murder Jews cannot legally be refugees. Hamas and Palestinian Islamic Jihad terrorists who fire rockets at Jews indiscriminately cannot be refugees. Nor can tens of thousands of Hamas-incited Gazans who attempted to breach the border fence with knives and maps showing the routes to Jewish kindergartens in their hands, who were attempting to slaughter Jewish children.

Further, in order to legally qualify as a refugee, one must have left a country due to “persecution or a well-founded fear of persecution.” (8 U.S.C. § 1101(a)(42)) Because Palestinian Arab refugees left Israel at the request of Arab leaders and governments, to enable the slaughter of Jews, and because while Israel urged the Arabs to remain and live together in peace, the “Palestinian refugees” also do not meet this legal requirement.

In sum, there are no valid Palestinian Arab refugees today.

We would love to hear from you! Please fill out this form and we will get in touch with you shortly.
Trending Z
News May 24, 2022
ZOA Condemns U.S. State Dept. & U.S. Amb. Nides For Siding with Antisemitic, Discriminatory Palestinian & Hamas Terrorists re: the Temple Mount, Violating Jews’ Religious Freedom
Uncategorized May 24, 2022
FLASH: ISRAEL-JORDAN PEACE TREATY (1994) GUARANTEES JEWS ACCESS TO THE TEMPLE MOUNT – LET MY PEOPLE PRAY
Uncategorized May 24, 2022
ZOA Analysis: Most American Rabbis Who Are Boycotting Some Israeli Ministers Are From Extremist Left Wing Groups (J Street; T’ruah; JVP)
Uncategorized May 24, 2022
Israel’s “Right of Return” Grandparent Clause is De-Judaizing the Jewish State – Eliminate It
Center for Law & Justice
We work to educate the American public and Congress about legal issues in order to advance the interests of Israel and the Jewish people.
We assist American victims of terrorism in vindicating their rights under the law, and seek to hold terrorists and sponsors of terrorism accountable for their actions.
We fight anti-Semitism and anti-Israel bias in the media and on college campuses.
We strive to enforce existing law and also to create new law in order to safeguard the rights of the Jewish people in the United States and Israel.
Our Mission
ZOA STATEMENT
The ZOA speaks out for Israel – in reports, newsletters, and other publications. In speeches in synagogues, churches, and community events, in high schools and colleges from coast to coast. In e-mail action alerts. In op-eds and letters to the editor. In radio and television appearances by ZOA leaders. Always on the front lines of pro-Israel activism, ZOA has made its mark.
Related Articles
OP-ED BY: ZOA New Report: Al-Dura Boy Wasn’t Killed –– Palestinians Staged Vicious Lie