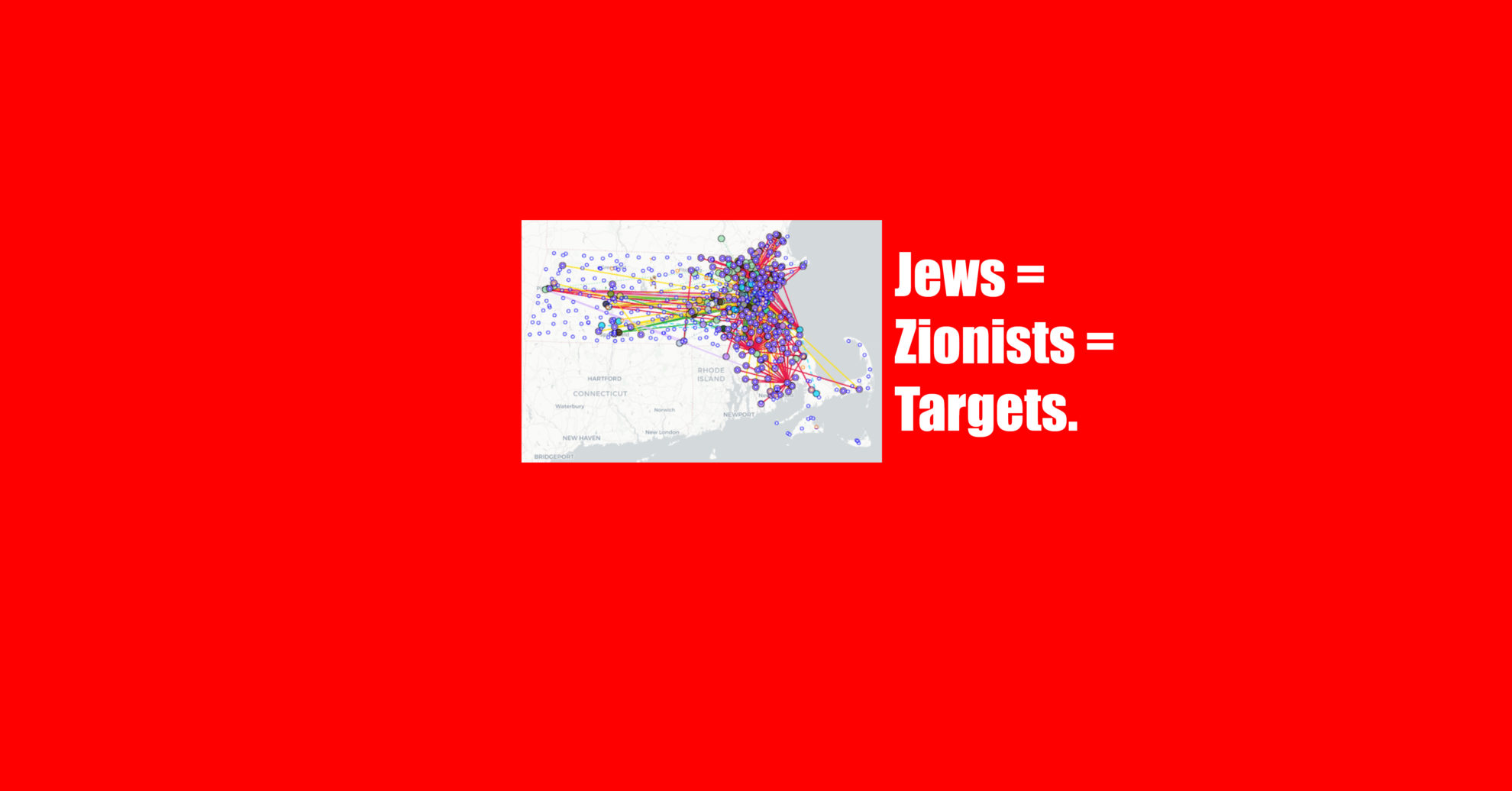 By Morton A. Klein

The report is a roadmap to anti-Jewish violence: The Mapping Project brazenly and openly maps and promotes “dismantling” and “disrupting” long lists of Boston-area Jewish institutions across the political spectrum, synagogues throughout Massachusetts, staff members, Jewish family foundations, schools and numerous other entities that allegedly have some sort of connection, past or present, real or imagined, to American Jews, Judaism, Jewish charities, Jewish education, Jewish donors or Israel.

Congressman Seth Moulton (D-MA) aptly called the Mapping Project a dangerous “antisemitic enemies list with a map attached.” The Zionist Organization of America (ZOA) sent a detailed letter to the U.S. attorney general and FBI director, urging them to investigate, monitor and where appropriate, prosecute the Mapping Project and other groups, such as Within Our Lifetime (WOL), which are mapping, promoting, and inciting violence against American Jews and Jewish organizations.

WOL mapped and threatened Jewish organizations in New York City, and calls for “globalizing the Intifada” – meaning, expanding to the United States and the rest of the world the horror of the Intifada terror wars, in which Arab terrorists murdered or maimed 10,000 Jews in Israel.

Specifically, in 2008-2011, NIF disbursed grants of $146,630 to the left wing Jewish/Palestinian group Coalition of Women for Peace (CWP), according to NIF financial statements for those years.

During the same period, NIF grantee CWP established and operated a Who Profits project, which researched and assembled a BDS target list of companies to boycott, in order to implement the 2005 BDS call that launched the modern BDS movement. CWP’s Who Profits project became the Who Profits BDS organization, in 2013.

The Mapping Project now relies on Who Profits’ boycott-targeting research, both directly and indirectly, by relying on the anti-Israel “Investigate” (boycott-targeting) project of the American Friends Service Committee (AFSC).

THE AFSC are virulently, antisemitic quacks who demonize and work to destroy Israel, while claiming to be promoting peace. The AFSC’s website explains that its BDS database of target companies supplements and “rel[ies] heavily on information published by the Who Profits research center.”

It’s not surprising that BDS is now biting the NIF hands that fed it. It seems that this has always been the case: Jews who helped an enemy of the Jewish people ended up being targeted themselves.

Almost a century ago, in 1923, Vladimir Jabotinsky wrote about the phenomenon of certain Jews who helped attain autonomy for a nation that was boycotting and pogroming Jews, only to have that nation’s anti-Jewish oppression become worse. Jabotinsky commented: “It is incredible what political simpletons Jews are!”

The Boston BDS Mapping Project and groups such as WOL have laid bare the true nature of BDS and the reality of the threats against us. BDS is not a civil rights movement aimed at improving Israel. BDS is a political, propaganda, cultural and economic-warfare campaign to completely dismantle and eradicate Israel, and more. In fact, we are dealing with a warfare campaign against the entire Jewish people, wherever they may be.

The Mapping Project and its ilk demonstrate that Israel-haters will ultimately turn on all of us, because hatred of Israel is ultimately hatred of all Jews. The hardcore Israel-haters consider all of us – Left, Right and Center – to be evil colonialist Zionists who deserve to be destroyed.

To understand this reality we are dealing with, we only need to hear WOL leader Nerdeen Kiswani threatening, while WOL activists burned a Zionist (Israeli) flag in front of Rockefeller Center in New York City, “The most notorious Zionists in this country, they’re right here in our city. We marched today, we took over the streets and we visited multiple Zionist settler foundations – multiple. We let them know we know where they’re at. We know where they work. We’re gonna find out more about where they’re at, too. And we’re gonna go after them.”

Unfortunately, although NIF discontinued funding CWP, the NIF still continues to donate huge sums to multiple groups, such as the Association for Civil Rights in Israel-ACRI, B’tselem, Breaking the Silence, etc., which falsely demonize, harass, and incite against the Jewish state and the Jews living there. Other far-Left Jewish groups also continue to make it a common cause with the hardcore Israel-haters.

Perhaps the Mapping Project and WOL’s Globalize the Intifada will finally bring our Jewish brethren to their senses.

Morton A. Klein is the National President of the Zionist Organization of America.

We would love to hear from you! Please fill out this form and we will get in touch with you shortly.
Trending Z
Uncategorized June 22, 2022
FLASH: ISRAEL-JORDAN PEACE TREATY (1994) GUARANTEES JEWS ACCESS TO THE TEMPLE MOUNT – LET MY PEOPLE PRAY
Uncategorized June 22, 2022
ZOA Analysis: Most American Rabbis Who Are Boycotting Some Israeli Ministers Are From Extremist Left Wing Groups (J Street; T’ruah; JVP)
Uncategorized June 22, 2022
Israel’s “Right of Return” Grandparent Clause is De-Judaizing the Jewish State – Eliminate It
Uncategorized June 22, 2022
Exclusive: ZOA Accuses Ilhan Omar of Hating the U.S. ‘as Much as Israel,’ Lauds Kevin McCarthy for ‘Throwing Her Off the HFAC’
Center for Law & Justice
We work to educate the American public and Congress about legal issues in order to advance the interests of Israel and the Jewish people.
We assist American victims of terrorism in vindicating their rights under the law, and seek to hold terrorists and sponsors of terrorism accountable for their actions.
We fight anti-Semitism and anti-Israel bias in the media and on college campuses.
We strive to enforce existing law and also to create new law in order to safeguard the rights of the Jewish people in the United States and Israel.
Our Mission
ZOA STATEMENT
The ZOA speaks out for Israel – in reports, newsletters, and other publications. In speeches in synagogues, churches, and community events, in high schools and colleges from coast to coast. In e-mail action alerts. In op-eds and letters to the editor. In radio and television appearances by ZOA leaders. Always on the front lines of pro-Israel activism, ZOA has made its mark.
Related Articles
OP-ED My Disturbing Encounter With the Harvard Crimson Regarding its Publication of a Blood Libel Against Israel and My Efforts to Refute it

By Alan Dershowitz On April 29, 2022, the Harvard Crimson published a blood libel against the nation state of the Jewish people. Its ignorant and bigoted screed was an example of journalistic malpractice, because of its willful errors of commission and omission. On April 30, I submitted a detailed op-ed refuting the Crimson editorial. On […]