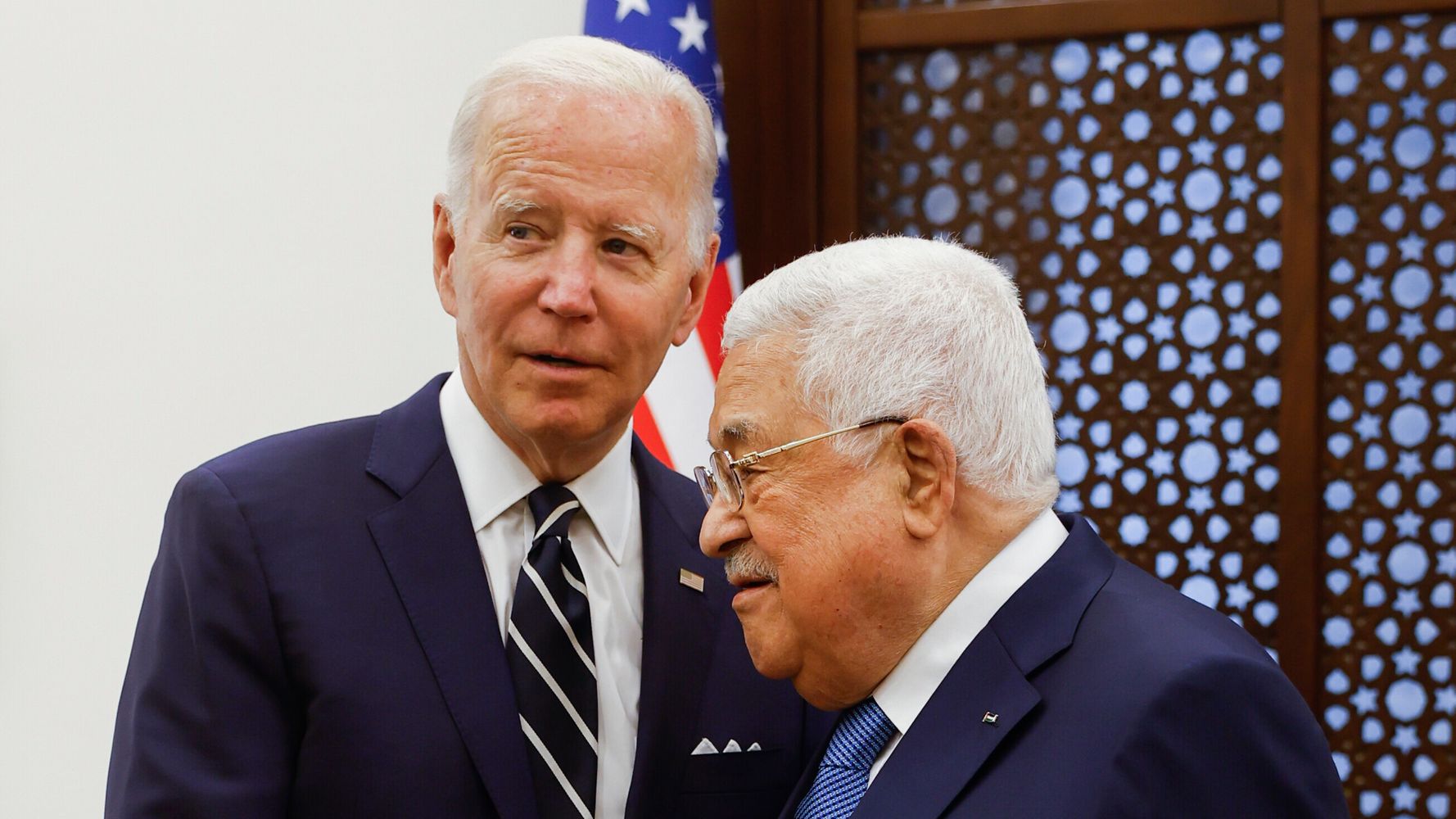 The policies and statements made by President Joe Biden last week during meetings with Israeli and Palestinian Arab leaders, including terrorist dictator Mahmoud Abbas, make it clear that Biden is becoming one of the most hostile presidents to Israel ever. Moreover, it’s becoming clearer that Biden is being greatly influenced by former President Barack Obama, as these policies are similar to Obama’s anti-Israel policies and virtually all of Biden’s hostile-to-Israel appointments were closely associated with Obama. One might argue that this is really Obama’s third term.

After President Biden undeservedly received Israel’s highest award last week, he spent the next several days making statements and announcing policies hostile to Israel. Then Biden met with and held a smiling joint press conference with Palestinian Authority/PLO terrorist dictator Mahmoud Abbas, legitimizing and mainstreaming him, despite the fact that Abbas continues to pay Arabs $400 million per year in lifetime pensions (at five times the rate of an average Palestinian worker) to murder Jews and Americans. And during Biden’s visit, Abbas announced an increase in the monthly payments to Jew-killers. During the Biden-Abbas meeting and joint press conference, Biden called for a Palestinian State (creating a Palestinian Arab terrorist dictatorship state on Israel’s land) “on the 1967 lines with land swaps mutually agreed to by the Israelis and Palestinians” dividing Jerusalem in half and ending Israel’s contiguity. (See: White House readout on July 15, 2022 Biden-Abbas meeting, and White House official transcript of July 15, 2022 Biden-Abbas joint press conference).

Biden Called for Israel to be Reduced to Auschwitz Borders: Biden’s call for a Palestinian Arab terror state “on the 1967 lines with land swaps mutually agreed to by the Israelis and Palestinians” is an extreme, unlawful, anti-Israel position. Biden is thus calling for creating a Palestinian Arab terror state that divides Israel’s capital Jerusalem, and rips away from the Jewish people and gives to Arab terrorists the portions of Jerusalem where the Jewish people’s holiest sites are located, plus the historic Jewish homelands of Judea and Samaria.

The bottom line is that Biden is seeking to reduce Israel’s borders to the indefensible pre-1967 lines, also known as the 1949 Armistice lines. Dovish Abba Eban called those lines “Auschwitz lines” because they would result in the Jewish state’s destruction.

Biden further claimed during his joint press conference with PA/PLO terrorist dictator Abbas that Palestinians “deserve” such a state. Biden ignored the fact that the Jewish people have the guaranteed right to all of these areas under binding international law. (See: “Israel Has The Legal Right To The Land Of Israel, Including Jerusalem, Judea-Samaria & The Golan, Under Binding International Law.”) Palestinian Arabs have done nothing to “deserve” a state on the Jewish people’s lawful land. Decades of Palestinian Arab intifadas, murder of innocent Jews and continuing goal of destroying the Jewish state irrefutably demonstrate that Palestinian Arabs do not deserve a state, not to mention they’ve turned down Israel’s generous offer of state three times in the last 20 years, claiming they won’t accept Israel as a Jewish state, or limit number of “refugees” they can bring into Israel proper.

In addition, Biden demanded that a Palestinian terror state must be “contiguous,” which means that Israel will be cut-up and non-contiguous.

Notably, Biden made no demands on the Palestinian Authority. Biden only made a vague, weak request to “strengthen Palestinian institutions, to improve governance, transparency, and accountability.” Biden made no demand on Abbas and the Palestinian Authority to end its anti-Jewish incitement, or to rescind the names of the 100 PA institutions, schools, streets and children’s camps named after Jew-killers, or to rewrite their textbooks promoting hatred and violence against Jews, or to stop paying Arab terrorists to murder Jews and Americans.

Instead of repeating and promoting anti-Israel Obama’s hateful anti-Israel policies, Biden should emulate pro-Israel Democratic President Lyndon Johnson – who made it clear that reducing Israel’s borders to pre-1967 lines “is not a prescription for peace but for renewed hostilities.”

It is deeply concerning that the Conference of Presidents of Major American Jewish Organizations and AIPAC issued statements praising Biden’s trip or aspects of his trip (see here and here) while failing to express concern on the numerous hostile-to-Israel policies and statements Biden made.

The Conference’s and AIPAC’s official statements ignored that Biden: (1) insisted on continuing Iran negotiations for a disastrous deal; (2) removed the Israeli flag from his limo when he went to eastern Jerusalem; (3) refused to allow Israeli officials to accompany his visit to an eastern Jerusalem hospital; (4) continued demanding a divisive Arab consulate in Israel’s capital Jerusalem; (5) dangerously pushed for Palestinian Arabs to help control Israeli-Jordanian crossings; (6) promoted and pressured Israel for “increased access” of Palestinian Arabs from Gaza and Judea and Samaria – thereby endangering Israel’s security; and (6) announced huge funding increases to UNRWA (who teaches Arab children to hate and kill Jews) and Palestinian Arab projects that free up more funds to pay terrorists to murder Jews and Americans.

This approximate $1.5 billion consists of:

These enormous, unwarranted payments violate or immorally attempt to circumvent the Taylor Force Law’s prohibitions on funding the Palestinian Authority as long as Abbas’ PA continues paying Arab terrorists $400 million per year in lifetime pensions to murder Jews and Americans.

Biden also announced additional benefits to the Palestinian Arabs, including upgrading Internet connectivity to 4G, which would give anti-Israel terrorists and propagandists additional tools.

Biden Insulted and Pressured Israel to Allow Palestinian Arab Access to Israel – Shortly After Palestinian Arabs Abused Their Access to Murder 19 Jews and Others: In late March-April 2022, Palestinian Arab terrorists abused their access to Israel to brutally murdered 19 Jews, Druze, Ukrainians and others, and to wound numerous other Israelis. Yet, in his joint press conference with terrorism-inciter Mahmoud Abbas, Biden promoted Palestinian Arab “freedom of movement” and condemned necessary Israeli security precautions such as checkpoints, by calling them “indignities like restrictions on movement and travel.”

In addition, the White House announced additional dangerous access for Palestinian Arabs that Biden extracted from Israel’s weak, unelected interim government, and confirmed Biden’s continuing pressure on Israel for more access, saying: “President Biden also announced that Israel agreed to increase the number of permits for Palestinians in Gaza to work and do business in Israel to 15,500. The Biden Administration strongly supports increased access and movement for Palestinians.”

Biden Pressured Israel for “Gestures” Establishing a De Facto Palestinian State in Israel’s Area C in Judea/Samaria: According to the excellent Israeli organization Regavim (which is dedicated to preserving the land of Israel), under Biden pressure, Israeli appeasement of Biden include approving six municipal masterplans for Arabs to take over large swaths of Israel’s Area C. Area C is essential to Israeli security, is where 500,000 Jews now live, and is lawfully Israeli land and under full Israeli administration. These appeasement plans would endanger, surround, and choke off Jewish communities in Judea and Samaria.

Biden Continues to Demand a Divisive, Illegal U.S. Consulate in Jerusalem for Palestinian Arabs: Biden’s National Security Advisor Jake Sullivan confirmed that during his Mideast trip: “He [Biden] did speak with President Abbas about his consistent policy, from when he was candidate to as President over the last 18 months, to reopen the consulate in Jerusalem. That continues to be the U.S. position, and we continue to engage with both the Israelis and Palestinians on the issue. And we spoke with both the Israelis and Palestinians on the issue on this trip.” (See: Official White House Transcript of press gaggle en route to Saudi Arabia, July 15, 2022.)

Such a consulate would promote dividing the Jewish people’s eternal capital Jerusalem; exert illegal pressure on Israel regarding her internal affairs; serve as a hotbed of spies and anti-Israel activities; waste U.S. taxpayer dollars; single out and insult Israel; reward, promote, cater to, and send a terrible message to the Palestinian Authority terror regime; and is illegal under the Jerusalem Embassy Act, the Vienna Convention on Consular Affairs and the Oslo Accords. The U.S. has no such consulate in any other country’s capital.

Only the Jewish people have such ancient roots, going back 4,000 years. The Jewish people are the indigenous people of Israel, including Judea and Samaria and Jerusalem. Abraham purchased land in Hebron to bury Sarah; Jacob dreamt in Bet El; David established Jerusalem as Israel’s capital; Jewish kingdoms existed for hundreds of years; the Jewish Temples stood on Jerusalem’s Temple Mount for approximately 1,000 years, etc., etc.

By contrast, most “Palestinian” Arabs moved into the Jewish homeland during the British Mandatory period (1922-1948), and first portrayed themselves as a “people” when the PLO terrorist organization was formed in 1964.

Biden again falsely portrayed Palestinian Arabs as an ancient people and victims, and demeaned the memory of thousands of Jewish victims of Palestinian Arab terror, by absurdly stating during Biden’s hospital visit in Jerusalem: “[T]he background of my family is Irish American, and we have a long history not fundamentally unlike the Palestinian people, with Great Britain and their attitude toward Irish Catholics over the years for 400 years.” Biden then outrageously claimed that an Irish poem – which spoke about “justice rising up,” fit Palestinian Arabs. (See: “Joe Biden Likens Israel-Palestinian Conflict to Irish ‘Troubles’ in Bizarre Aside,” New York Post, July 15, 2022.) There is absolutely nothing “just” about the Palestinian Authority’s decades of anti-Jewish terror and efforts to create a terrorist “State of Palestine,” that endangers and is designed to destroy and replace Israel.

We would love to hear from you! Please fill out this form and we will get in touch with you shortly.
Trending Z
News July 18, 2022
Biden’s Policies Voiced at Israeli and Palestinian Mtgs. Demanding Israel Return to ‘67 “Auschwitz” Lines, End Checkpoints, Open Jerusalem Arab Consulate – and More – Show Biden’s No Friend to Israel
Uncategorized July 18, 2022
Newsweek: The ADL Has Corrupted Its Mission and Betrayed the Jewish Community
Multimedia July 18, 2022
Amb. David Friedman: Biden’s Hostile-to-Israel Statements/Actions Make Mideast Trip a Failure
News July 18, 2022
Biden Visit ‘Despicable, Disastrous’ Flag-Waving Failure | The Daily Wire
Center for Law & Justice
We work to educate the American public and Congress about legal issues in order to advance the interests of Israel and the Jewish people.
We assist American victims of terrorism in vindicating their rights under the law, and seek to hold terrorists and sponsors of terrorism accountable for their actions.
We fight anti-Semitism and anti-Israel bias in the media and on college campuses.
We strive to enforce existing law and also to create new law in order to safeguard the rights of the Jewish people in the United States and Israel.
Our Mission
ZOA STATEMENT
The ZOA speaks out for Israel – in reports, newsletters, and other publications. In speeches in synagogues, churches, and community events, in high schools and colleges from coast to coast. In e-mail action alerts. In op-eds and letters to the editor. In radio and television appearances by ZOA leaders. Always on the front lines of pro-Israel activism, ZOA has made its mark.
Related Articles
OP-ED ZOA to K. Harris: Reverse Your Troubling Positions on Iran, Omar, Israel’s Sovereign Rights