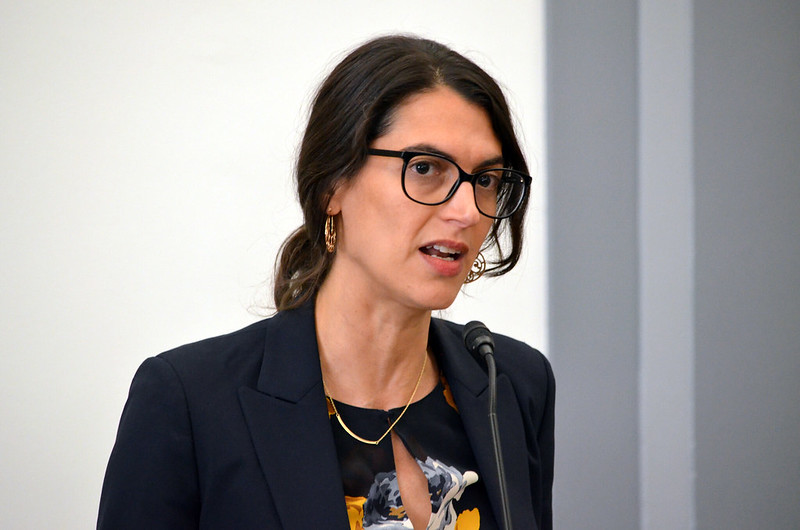 The Zionist Organization of America celebrates the withdrawal by Sarah Margon of her nomination to serve as Assistant Secretary of State for democracy, human rights and labor. She was nominated by President Biden in April of 2021, but her appointment was held up in the Foreign Relations Committee by Senator Jim Risch (R-ID) although she had the support of all committee Democrats.

Margon has a lengthy record of anti-Israel activism and spent years working against the Jewish state at Human Rights Watch and George Soros’ Open Society Foundations. Her unacceptable statements and activities have earned her a place on ZOA’s Biden Appointments Watch which tracks the legion of objectionable appointees to and officials who serve in the Biden administration. ZOA has been working to make lawmakers aware that Margon believes it should be a crime for Jews to live in certain territories and has cheered the destruction of Israel.

Zionist Organization of America National President Morton A. Klein stated, “Human rights are important and that most definitely must include the human rights of Israeli Jews who are under assault from violent terrorists as well as bigots who hold Israel to a biased double standard. It is perverse to single Israel out for sanction when it is the only democracy in the Middle East, the only country in the region that respects human rights, gay rights, religious liberty, and freedom of speech. Organizations like Human Rights Watch and George Soros’ Open Society Foundations are nothing more than a collection of such bigots who outrageously target Israel because it is the world’s one and only Jewish state.

“Sarah Margon was an inappropriate appointee from the start given her hatred of Israel and support for the antisemitic BDS movement. She is one of many hostile-to-Israel Biden nominees to important posts and we are glad she, at least, is no longer under consideration.”

ZOA Director of Government Relations Dan Pollak stated, “Senator Jim Risch (R-ID) deserves tremendous credit for stopping this disastrous nomination from moving forward. She is overtly a supporter of BDS, although she lied about this in her confirmation hearing. Opposition to her nomination should have been bipartisan, and it is a stain on every Democratic Senator who knew that she was not suited for this job yet still supported her for political reasons. In this case the system worked to stop an anti-Israel activist from holding a vital office in the State Department. ZOA hopes President Biden will nominate a qualified candidate for this position who is not an Israel-hating activist.”

We would love to hear from you! Please fill out this form and we will get in touch with you shortly.
Trending Z
News January 25, 2023
ZOA Condemns U.S. State Dept. & U.S. Amb. Nides For Siding with Antisemitic, Discriminatory Palestinian & Hamas Terrorists re: the Temple Mount, Violating Jews’ Religious Freedom
News January 25, 2023
ZOA’s Klein JPost Op-Ed: There is Nothing Extreme About Israel’s New Government
Uncategorized January 25, 2023
FLASH: ISRAEL-JORDAN PEACE TREATY (1994) GUARANTEES JEWS ACCESS TO THE TEMPLE MOUNT – LET MY PEOPLE PRAY
Uncategorized January 25, 2023
ZOA Analysis: Most American Rabbis Who Are Boycotting Some Israeli Ministers Are From Extremist Left Wing Groups (J Street; T’ruah; JVP)
Center for Law & Justice
We work to educate the American public and Congress about legal issues in order to advance the interests of Israel and the Jewish people.
We assist American victims of terrorism in vindicating their rights under the law, and seek to hold terrorists and sponsors of terrorism accountable for their actions.
We fight anti-Semitism and anti-Israel bias in the media and on college campuses.
We strive to enforce existing law and also to create new law in order to safeguard the rights of the Jewish people in the United States and Israel.
Our Mission
ZOA STATEMENT
The ZOA speaks out for Israel – in reports, newsletters, and other publications. In speeches in synagogues, churches, and community events, in high schools and colleges from coast to coast. In e-mail action alerts. In op-eds and letters to the editor. In radio and television appearances by ZOA leaders. Always on the front lines of pro-Israel activism, ZOA has made its mark.
Related Articles
OP-ED ZOA Urges Lapid & Herzog: Cancel Giving Undeserving Pres. Biden Major Israeli Award