Kissinger, Shultz: The Iran Deal and Its Consquences

The announced framework for an agreement on Iran’s nuclear program has the potential to generate a seminal national debate. Advocates exult over the nuclear constraints it would impose on Iran. Critics question the verifiability of these constraints and their longer-term impact on regional and world stability. The historic significance of the agreement and indeed its […]

President Obama is trying the patience of Jewish Democrats in Congress, a dozen of whom took Deputy National Security Adviser Ben Rhodes to the woodshed last week over the president’s continued criticism of Benjamin Netanyahu. According to Politico, the lawmakers complained to Mr. Rhodes that Mr. Obama is behaving as though the Israeli prime minister’s […]

Rabbi Shlomo Riskin, a prominent American-Israeli Orthodox rabbi, compared President Barack Obama to Haman, the villain of the Purim story. Riskin, the longtime chief rabbi of Efrat, a West Bank settlement in the Gush Etzion bloc, made the comparison during a speech at the Jerusalem Great Synagogue, The Jerusalem Post reported. “The president of the […]

While Hillary Clinton won’t say anything of substance herself, the New York Times reports her views on Israel via a third party, Malcolm Hoenlein, executive vice chairman of the Conference of Presidents of Major American Jewish Organizations: “Secretary Clinton thinks we need to all work together to return the special U.S.-Israel relationship to constructive footing, […]

J-Street Speaker Calls for Destruction of Israel – To Applause

Here is Marcia Freedman, in a J-Street panel discussion on Liberal Zionism and sitting next to Peter Beinart, describing how she believes that the Jewish people should not have a state, and that instead they should live as a minority in an Arab Palestine as a “protected minority” – in other words, as dhimmis. I […]

White House Chief of Staff Denis McDonough has said that President Barack Obama will not overlook the comments Israeli Prime Minister Benjamin Netanyahu made in the closing days of his campaign that he had abandoned support of the two-state solution and approved of settlements in the contested territory in Jerusalem. “We cannot simply pretend these […] 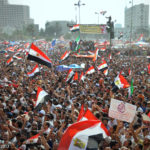 The State Department hosted a delegation of Muslim Brotherhood-aligned leaders this week for a meeting about their ongoing efforts to oppose the current government of President Abdel Fattah al-Sisi of Egypt, who rose to power following the overthrow of Mohamed Morsi, an ally of the Brotherhood, in 2013. One member of the delegation, a Brotherhood-aligned judge […]

They shouted in Arabic “Allahu Akbar” (Allah is Greatest) and “We are avenging the Prophet Mohammed” as they sprayed their victims with hundreds of bullets from their semi-automatic weapons. Their “victims” were the top editorial cartoonists of the satirical Charlie Hebdo magazine, who had dared to practice their right of free speech. Their offense? Publishing cartoons deemed “offensive” by […]

Israel’s Ambassador Dermer: “It’s a Disgrace to Call Abbas ‘A Man of Peace'”

Sir, – The vote in the British parliament (“PA calls on UK gov’t to follow parliament’s lead and recognize Palestinian state,” October 15) is distressing but hardly surprising. The upsurge of international opprobrium directed at Israel is a product of the Oslo Accords. Once the idea was conceded that creating peace was chiefly a matter […]