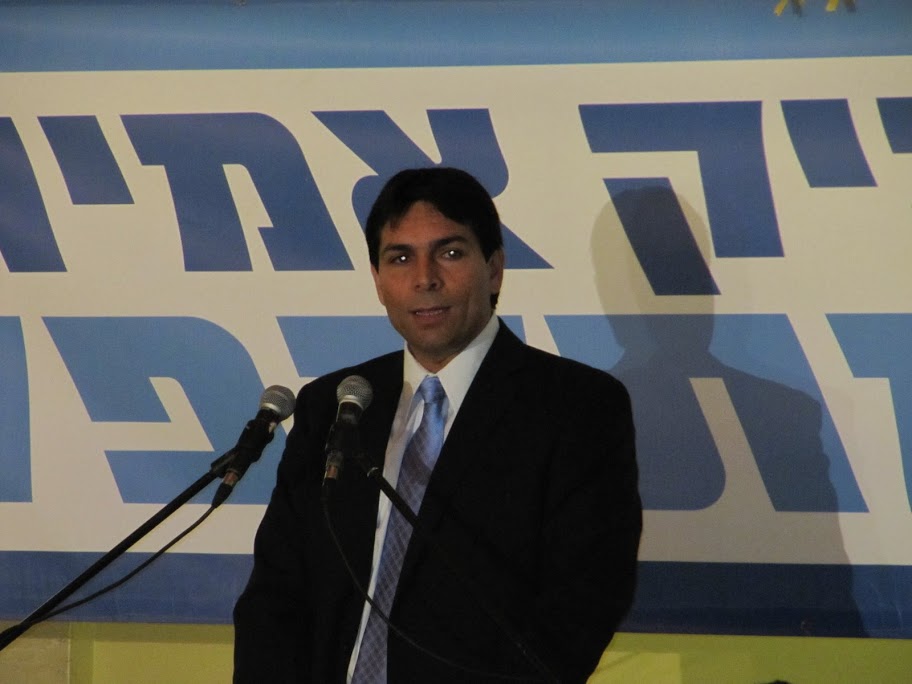 David Horovitz, editor of the liberal Israeli paper The Times of Israel, pointed out, “Danon said that most members of the Likud Knesset faction oppose Palestinian statehood.  He said most members of the coalition oppose Palestinian statehood.  All of which is understandably true and familiar.  He also said that if the issue of creating a Palestinian state were brought to a vote in the Likud or in the coalition, the majority of opponents would block the move.  Again, hard to argue with.”  Danon simply told the truth.

The AJC also claimed that “Defense Minister Moshe Ya’alon asked the Prime Minister to reprimand Danon.” It is surprising that AJC would promote such an unverified report. This unverified report seems especially unlikely in light of the fact that Defense Minister Ya’alon stated several months ago that he “ruled out the possibility of establishing a Palestinian state alongside Israel,” (Jerusalem Post, 12-1-13 “Ya’alon Spoke Against Founding of Palestinian State”).  Additionally, last year, Minister Ya’alon gave a speech to the Conference of Presidents of Major American Jewish Organizations and a speech at the AIPAC Conference publicly opposing a Palestinian state. Ya’alon went further and said, “There are those who are trying to market Abbas as relatively moderate, but his goals are the same as those of Hamas.  He does not believe in an agreement based on pre-1967 lines and he is refusing to come to the negotiating table.” Why didn’t AJC criticize Ya’alon for these speeches opposing the creation of a Palestinian state?

Other ministers have joined Ya’alon and Danon’s opposition to Palestinian statehood including but not limited to Economics Minister Naftali Bennett, head of the Bayit Yehudi Party. The number two leader in the Likud party, Minister of Interior and former Education Minister, Gideon Saar, criticized the drive to create a Palestinian state, saying such a state would be a “dangerous move” and would “never bring peace.” Why didn’t AJC criticize him?

Other top Israeli government officials have made similar anti-Palestinian statehood comments:  Deputy Foreign Minister, Ze’ev Elkin opposes a Palestinian state stating last July at a conference, “This is our land…It’s time to end this system in which the Palestinians take and take and we give and give.”  Netanyahu’s coalition chief, Yariv Levin, and Housing Minister Uri Ariel oppose a state.  So do many, many other top Israeli officials. Even former Israeli Prime Minister Rabin, head of the leftwing Labor Party, stated in his last speech to the Knesset, that a future Palestinian entity “will be less than a state” and that he will never give up any part of Jerusalem or the Jordan Valley. Prime Minister Shamir also opposed a state. To be consistent, AJC should be criticizing them all.

AJC’s own polls show that for two years less than half of U.S. Jews support a state, 38% and 43%, respectively.

These prime ministers, ministers and many Knesset members are hardly alone.  AJC’s own polls show that for two years less than half of U.S. Jews support a state, 38% and 43%, respectively.  Even a Gallup poll earlier this year showed that only 44% of American non-Jews support a Palestinian state.

Many in Israel and America now realize that the Palestinian’s goal is not a state but Israel’s destruction.  AJC’s own poll shows that 76% of US Jews believe that. Especially when one sees that the Palestinian Arabs could have had a state but rejected it in 1937 (Peel Commission), 1947 (UN Res. #181), 2000 (Prime Minister Barak’s offer), 2008 (Prime Minister Olmert’s offer); and they did not establish a Palestinian state between 1948-1967, when the Arabs controlled the West Bank, one-half of Jerusalem, and all of Gaza.

Why does the American Jewish Committee so glibly, comfortably and openly go against most American Jews, Americans and top leaders in Israel? At a minimum, shouldn’t the AJC tread lightly and cautiously with respect to supporting a Palestinian state?  Does the AJC really want an Abbas-led state that, to this day, promotes hate education against Jews and Israel in their media, schools and speeches; doesn’t accept Israel as a Jewish state; doesn’t show Israel on their maps; doesn’t stop saying that Israel has occupied Arab lands since 1948; doesn’t arrest terrorists; doesn’t stop demanding that Israel release terrorists; doesn’t stop demanding that millions of Arab “refugees” must move into Israel; doesn’t end relations with Hamas; openly states that a Palestinian state will go to the International Criminal Court, make claims alleging Israeli human rights abuses; and makes the racist, anti-Semitic statement that no Jews will be allowed to live in any future Palestinian territory.

And does AJC really believe the Palestinian Arabs will accept Prime Minister Netanyahu’s minimum conditions for a Palestinian state – that it accept Israel as a “Jewish” state, that it be demilitarized, that it not include the Jordan Valley and Jerusalem, that no so-called “refugees” be allowed into Israel, that they stop glorifying terrorists and change the names of the schools, streets, sports teams, tournaments and children’s camps named after Jew-killing terrorists and that the Palestine Authority end its massive and relentless delegitimization and demonization of Israel.  Also, what does AJC propose we do about Hamas-controlled Gaza and Abbas’ alliance with Hamas? What does AJC propose we do with 400,000 Jews who live in eastern Jerusalem and the West Bank (Judea & Samaria)?  Do we throw all of them out of their homes?  Half of them?

We also need to understand that a sovereign state doesn’t necessarily create a civic and peace-loving society – it only strengthens the ability of the underlying culture to promote their agenda.  In this case, it is a very horrible agenda. Iran, Libya, North Korea, Afghanistan and Syria are sovereign states.  Are they lovely and peaceful?

It is inappropriate and wrong for the AJC to cavalierly and egregiously dismiss the legitimate view of so many top Israeli officials and over half of US Jews and Americans who oppose a Palestinian state. Understandably, these officials and others are deeply concerned that a Palestinian state could become a Hamas/Iran terrorist state with thousands of rockets raining down on Israel’s most populous areas.  It’s shocking that AJC overlooks this danger to the Jewish state of Israel and chastises some of those who hold this legitimate view. They also overlook the many legal opinions by top international legal scholars including former Chief Judge of The Hague, Stephen Schwebel, that Israel has a far greater legal claim to the land than the Arabs.

Painfully, the AJC, as so many other Jewish organizations ignore completely the fact that our Holy Bible, believed in by billions of human beings around the world, states that G-d gave this land to the Jews.  The Arabs repeatedly claim they won’t give away an inch of their holy land, saying that Allah forbids giving any part of Palestine away. They never claim they need it for security purposes.  Why shouldn’t the Jews and Jewish organizations and Israel invoke the Holy Bible every now and then?  Every Bible-believing Christian and Jew will support that.

All of these points make it clear that those who oppose a Palestinian state have at least as legitimate a position as those who support it.  It would be reasonable, appropriate and just for the American Jewish Committee to simply acknowledge and respect that fact.

We would love to hear from you! Please fill out this form and we will get in touch with you shortly.
Trending Z
Uncategorized June 20, 2013
ZOA Analysis: Most American Rabbis Who Are Boycotting Some Israeli Ministers Are From Extremist Left Wing Groups (J Street; T’ruah; JVP)
Uncategorized June 20, 2013
ZOA: Israel’s Reasonable Judicial Reform Proposals Are Good for Democracy, the Rule of Law and the Economy
Uncategorized June 20, 2013
Israel’s “Right of Return” Grandparent Clause is De-Judaizing the Jewish State – Eliminate It
News June 20, 2013
ZOA is Disappointed, Offended and Frightened by 211 U.S. House Votes Supporting Jew-Hating, Israel-Hating Rep. Ilhan Omar
Center for Law & Justice
We work to educate the American public and Congress about legal issues in order to advance the interests of Israel and the Jewish people.
We assist American victims of terrorism in vindicating their rights under the law, and seek to hold terrorists and sponsors of terrorism accountable for their actions.
We fight anti-Semitism and anti-Israel bias in the media and on college campuses.
We strive to enforce existing law and also to create new law in order to safeguard the rights of the Jewish people in the United States and Israel.
Our Mission
ZOA STATEMENT
The ZOA speaks out for Israel – in reports, newsletters, and other publications. In speeches in synagogues, churches, and community events, in high schools and colleges from coast to coast. In e-mail action alerts. In op-eds and letters to the editor. In radio and television appearances by ZOA leaders. Always on the front lines of pro-Israel activism, ZOA has made its mark.
Related Articles
OP-ED BY: ZOA New Report: Al-Dura Boy Wasn’t Killed –– Palestinians Staged Vicious Lie