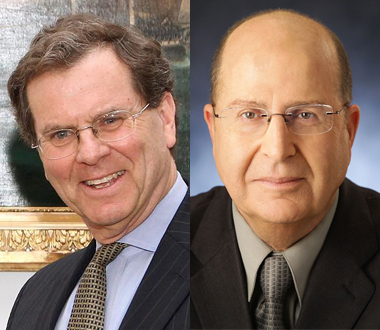 The ZOA has expressed concern and puzzlement that the American Jewish Committee (AJC) condemns those who oppose creating a Palestinian state under prevailing conditions yet, at the same time, rarely condemns continuing PA incitement to hatred and murder against Jews and Israel in the PA-controlled media, mosques, schools and youth camps. This is despite the fact that, unless such incitement ends, creating a Palestinian state will lead to a Hamas/Iranian terrorist dictatorship, not peace. Why is the AJC not tackling the issue of incitement, when its continuation will mean merely the creation of another terrorist dictatorship, as both Prime Minister Benjamin Netanyahu and Defense Minister Moshe Yaalon have said in recent weeks?

Only last week, Prime Minister Netanyahu told the Washington Post that a peace agreement with the PA must be one in which “We’ll have to have an arrangement that assures our security, that tells us what’s on the other side in a Palestinian state. Is it another Iranian client-state that is committed to our destruction? That arms itself with missiles and rockets? Or is it something that actually changes the climate, that teaches its people and its children to live in peace with us and is genuinely demilitarized?” (‘Interview with Israeli Prime Minister Benjamin Netanyahu, by Lally Weymouth,’ Washington Post, June 20, 2013).

Similarly, Defense Minister Yaalon, formerly Deputy Prime Minister and Israel Defense Forces (IDF) Chief-of-Staff, stated earlier this month: “The crux of the matter is education in the Palestinian Authority, and if I open a PA textbook and see that Israel doesn’t appear on the map, or that Tel Aviv is designated as a settlement, and when a 3-year-old boy is brought up to admire suicide bombers – you can sign any agreement and in the end it will blow up in your face” (‘Ya’alon: No real peace without end to Palestinian incitement,’ Israel Hayom, June 3, 2013).

Nor is it news that Yaalon holds these views. He has said this often, including the following in 2010: “Is it any wonder Israelis find it ever more difficult to trust the Palestinians? … The Palestinians remain steadfast in their refusal to accept that there even exists a Jewish nation that lays legitimate claim to its land. They reject the entire premise of a state for the Jewish people — not only beyond the pre-1967 lines of the state of Israel, but even within its original 1948 boundaries. This, of course, explains why the Palestinians did not pursue independence prior to 1967, when Israel was within the 1949 Armistice lines … This fact becomes perfectly clear when observing how Palestinian leaders educate their own people. The language of hate is the vernacular of choice for the official Palestinian media, which indoctrinates its audience with the narrative that Jews have usurped their land and have no business being here — and not just in Hebron or Ariel, but even in Jerusalem or Tel Aviv. Palestinian television is notorious for broadcasting what amounts to classic incitement — parading about children who glorify the use of weapons to destroy Israel and accusing Jews of “stealing” cities such as Haifa, which even the U.N. Partition Plan of 1947 included as part of the Jewish state.There is no chance that peace can come to the region as long as the Palestinians continue to spew this sort of vitriol. The only way forward must involve a bottom-up approach in which Palestinians develop the type of civil discourse that is a prerequisite to reconciliation. Schoolchildren in the Palestinian Authority must be taught to respect the human dignity of their Jewish neighbors, just as Israeli youths are instructed to be tolerant of others — including Palestinians” (‘The Palestinians Are the Real Obstacle to Peace,’ Foreign Policy, December 14, 2010).

Yet despite these vital, commonsense prerequisites for a genuine peace, the AJC rarely if ever makes an issue of anti-Israel, anti-Jewish incitement by Abbas’ PA. A search for the word ‘incitement’ on the AJC website reveals only occasional press releases over the past dozen or more years which even mention the subject; and none since 2001 in which Palestinian incitement was the headline issue. (In November 2001, the AJC issued a press release praising then-Secretary of State Colin Powell’s call for the Palestinians to end incitement and its campaign of violence and terror).

Mostly, the AJC has spoken of incitement against Israel or Jews by other countries or parties, not the Palestinians in general or the PA in particular. To give three examples from recent years, in June 2004, it criticized anti-Semitism in Arab countries; in January 2009, it praised France for banning a Hamas TV station, Al-Aqsa TV, and its “incitement to terror”; and in October 2009, it condemned Turkish anti-Israel incitement. Generally, however, one looks in vain to find the issue of PA-sponsored incitement tO hatred and murder the topic of AJC press releases. Normally, where mentioned at all, the whole subject only appears occasionally in passing.

In fact, strong AJC criticism of the PA is altogether rare. Normally, the AJC merely calls for Abbas and the PA to say yes to peace and so on, but only rarely does it address why Abbas and the PA actually do not make peace – their anti-peace goals and non-acceptance of Israel’s existence as Jewish state, as evidence in innumerable statements by senior PA officials from Abbas down, as the ZOA has frequently noted.

One of the rare exceptions came in May 2011 when the AJC’s David Harris issued a statement condemning Mahmoud Abbas’ lie-ridden New York Times op-ed (as did the ZOA), expressing “dismay” at Abbas’ outlining PA plans fora unilateral declaration of statehood later that year in the UN General Assembly, noting that Abbas was “rewriting history,” perusing a state along the “1967 border” [i.e. the 1949 armistice lines] and that this “strategy will effectively end the Israeli-Palestinian peace process.” It also noted that Abbas made no mention of the hundreds of thousands of Jews expelled and exiled from Arab lands; the PA’s refusal to negotiate during the Israeli 10-month Jewish construction freeze in Judea/Samara; ands only briefly mentioned that “the teaching of incitement, glorification of terrorists, torture, legal abuses, and failure to recognize Israel’s inherent legitimacy are still prevalent in land under Palestinian Authority rule, and Gaza, of course, is far worse.”

Not only is this a rare instance of the AJC raising PA incitement, but the AJC has continued not to oppose U.S. funding for the PA even though, in the same op-ed, David Harris rightly pointed out that the Palestinian statehood bid was opposed specifically at the time by Secretary of State Hillary Clinton and approvingly cited her statement in 2000, when still a New York senator, that “It must be clear that any unilateral declaration of Palestinian statehood would be entirely unacceptable and should be met with a cutoff of United States assistance.” Yet, when in 2012, the PA ignored U.S. objections and obtained a declaration of statehood from the UN, the AJC did not urge that U.S. funding to the PA be cut, nor did it call upon Secretary Clinton to live up to her words in 2000 and urge President Obama to cut aid to the PA.

The most detailed AJC statement on PA incitement in the last three years comes from a July 2010 document discussing several issues relating to Israeli/Palestinian negotiations, in which it devoted a single paragraph to the subject, saying that “While the Palestinian Authority has shown some progress in curbing incitement against Israel – such as removing imams who call for suicide bombings and identifying teachers who promulgate Hamas hatred in West Bank schools – it has done too little to counter rejectionist and violence-promoting messages in state-run media or eliminate other highly visible forms of incitement, such as naming children’s summer camps after “martyred” terrorists. Palestinian incitement is a major obstacle to the peace process, as it erodes support for that process in the Israeli public. It is imperative that the Palestinian Authority take firm action against this scourge.”

If it is imperative that the PA act to end incitement, why do we hear so little about the subject from the AJC? Furthermore, the ZOA is stunned to see that the AJC regards Palestinian incitement as a “major obstacle to the peace process” – not because it is indicative of Palestinian unwillingness to accept Israel as a Jewish state which prevents the possibility of peace, or because it produces the terrorism and violence that takes Israeli lives, but because it “erodes support” for negotiations among Israelis.

The ZOA believes all Jewish organizations should be highlighting Palestinian incitement to hatred and murder and calling for the utmost pressure on Abbas’ PA to end it, without which no peace is possible.

We would love to hear from you! Please fill out this form and we will get in touch with you shortly.
Trending Z
Uncategorized June 26, 2013
FLASH: ISRAEL-JORDAN PEACE TREATY (1994) GUARANTEES JEWS ACCESS TO THE TEMPLE MOUNT – LET MY PEOPLE PRAY
Uncategorized June 26, 2013
ZOA Analysis: Most American Rabbis Who Are Boycotting Some Israeli Ministers Are From Extremist Left Wing Groups (J Street; T’ruah; JVP)
Uncategorized June 26, 2013
Israel’s “Right of Return” Grandparent Clause is De-Judaizing the Jewish State – Eliminate It
Uncategorized June 26, 2013
Exclusive: ZOA Accuses Ilhan Omar of Hating the U.S. ‘as Much as Israel,’ Lauds Kevin McCarthy for ‘Throwing Her Off the HFAC’
Center for Law & Justice
We work to educate the American public and Congress about legal issues in order to advance the interests of Israel and the Jewish people.
We assist American victims of terrorism in vindicating their rights under the law, and seek to hold terrorists and sponsors of terrorism accountable for their actions.
We fight anti-Semitism and anti-Israel bias in the media and on college campuses.
We strive to enforce existing law and also to create new law in order to safeguard the rights of the Jewish people in the United States and Israel.
Our Mission
ZOA STATEMENT
The ZOA speaks out for Israel – in reports, newsletters, and other publications. In speeches in synagogues, churches, and community events, in high schools and colleges from coast to coast. In e-mail action alerts. In op-eds and letters to the editor. In radio and television appearances by ZOA leaders. Always on the front lines of pro-Israel activism, ZOA has made its mark.
Related Articles
OP-ED BY: Morton A. Klein, ZOA ZOA Troubled AJC Condemned Israeli Ministers Danon, Bennett for Opposing Pal. State, Falsely Saying PM Reprimanded Danon