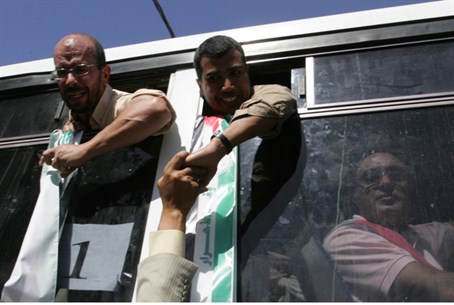 Glaring Hypocrisy – Obama Critical of Mexican Release of Murderer Of An American, Yet Pressured Israel To Release 104 Terrorists Who Murdered Hundreds Of Israelis
News Press Release

The Zionist Organization of America (ZOA) has criticized the glaring hypocrisy and inconsistency of President Barack Obama criticizing Mexican authorities for freeing a killer of an American while having pressured Israel, not only into freeing 104 terrorists who murdered, injured and maimed hundreds of Israeli men, women and children, but also a terrorist who murdered an American.

This week, a Mexican court released from prison Rafael Caro Quintero, a drug lord who was sentence in 1985 to 40 years in prison for the kidnapping, torture and murder of U.S. Drug Enforcement Administration agent, Enrique “Kiki” Camarena. The Obama Administration immediately criticized the Mexican authorities, National Security Council spokeswoman Caitlin Hayden saying, “We remain as committed today in seeing Quintero and others involved in this crime face justice in the United States as we were in the immediate aftermath of Kiki Camarena’s murder.”

The U.S. Justice Department described the Mexican decision to free Quintero as “deeply troubling and declared that it ‘will vigorously continue its efforts to ensure Caro Quintero faces charges in the United States for the crimes he committed.'” (‘White House denounces release of Mexican drug lord who ordered DEA agent’s killing,’ Fox News, August 10, 2013).

Yet, only days earlier, the Obama Administration pressured Israel to free terrorists, including Al Haj Othman Amar Mustafa, who in June 1989 murdered Steven Frederick Rosenfeld, an American and former Marine, while he was hiking in the Judean Hills.

ZOA National Chairman of the Board Dr. Michael Goldblatt said, “It is well known that the Obama Administration, despite a public position of seeking resumed Israeli/Palestinian negotiations without preconditions, strongly pressured Israel to accede to Palestinian demands to free Jew-killing terrorists in order to kick-start Israeli/Palestinian peace talks.

“President Obama and his Administration seem to have immediately grasped that the freeing of a Mexican drug lord responsible for the kidnapping and torture of an American is contrary to justice, reason, deterrence and the security and safety of Americans.

“Indeed, even if no Americans had been killed by the terrorists being released by Israel, why is he in favor of Israel freeing bestial murderers of Jews?

“We are appalled that President Obama and his Administration pressured a close ally, Israel, into releasing Palestinian Jew-killers in order to bring Mahmoud Abbas’ Palestinian Authority to the negotiating table. Apparently, they thought nothing for the lives of Israelis who will be murdered by the terrorists to be freed.

“Israel should rescind its decision to free the terrorists.

“The ZOA calls upon President Obama to order the Department of Justice to pursue prosecution of Mustafa under the 1990 Antiterrorism Act for the murder of Steven Rosenfeld.”

We would love to hear from you! Please fill out this form and we will get in touch with you shortly.
Trending Z
Uncategorized August 16, 2013
FLASH: ISRAEL-JORDAN PEACE TREATY (1994) GUARANTEES JEWS ACCESS TO THE TEMPLE MOUNT – LET MY PEOPLE PRAY
Uncategorized August 16, 2013
ZOA Analysis: Most American Rabbis Who Are Boycotting Some Israeli Ministers Are From Extremist Left Wing Groups (J Street; T’ruah; JVP)
Uncategorized August 16, 2013
Israel’s “Right of Return” Grandparent Clause is De-Judaizing the Jewish State – Eliminate It
Uncategorized August 16, 2013
Exclusive: ZOA Accuses Ilhan Omar of Hating the U.S. ‘as Much as Israel,’ Lauds Kevin McCarthy for ‘Throwing Her Off the HFAC’
Center for Law & Justice
We work to educate the American public and Congress about legal issues in order to advance the interests of Israel and the Jewish people.
We assist American victims of terrorism in vindicating their rights under the law, and seek to hold terrorists and sponsors of terrorism accountable for their actions.
We fight anti-Semitism and anti-Israel bias in the media and on college campuses.
We strive to enforce existing law and also to create new law in order to safeguard the rights of the Jewish people in the United States and Israel.
Our Mission
ZOA STATEMENT
The ZOA speaks out for Israel – in reports, newsletters, and other publications. In speeches in synagogues, churches, and community events, in high schools and colleges from coast to coast. In e-mail action alerts. In op-eds and letters to the editor. In radio and television appearances by ZOA leaders. Always on the front lines of pro-Israel activism, ZOA has made its mark.
Related Articles
OP-ED BY: Morton A. Klein, ZOA Report Claims Obama States Israel Won’t Make Concessions