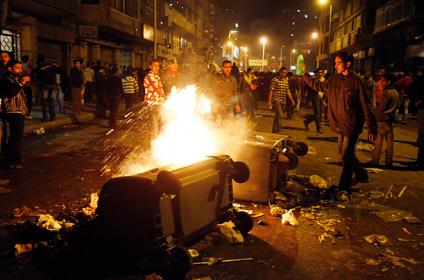 The Zionist Organization of America (ZOA) has called upon President Barack Obama and world leaders, national and religious, to condemn the wave of Muslim Brotherhood-led anti-Christian murders and other violence in Egypt which, in recent days, has seen hundreds of Christians murdered and maimed and wounded; and over 40 churches burned down, destroyed and vandalized. Reports state that the Muslim Brotherhood’s Freedom and Justice Party has posted a memo on its Facebook page, giving sanction to the burning of churches. Ousted President Mohamed Morsi was the MB’s was elected president in 2011 running as the candidate of the Muslim Brotherhood.

The Muslim Brotherhood memo posted shows a clear call to incitement against Egypt’s Coptic Christian population, which is approximately 10% of the Egyptian population, giving its blessing to the burning of churches. Bishop Thomas, a Coptic Orthodox bishop in Assiut, Egypt, said, “It never happened before in history that such a big number of churches were attacked on one day … We normally used to have attacks once a month or so.” The Brotherhood memo states that “The Pope of the Church (Coptic Pope Tawadros II) took part in the ouster of the first elected Islamist president. The Pope of the Church charges Islamic Sharia with underdevelopment [and] stagnation … for the Church to adopt a war against Islam and Muslims is the worst crime. For every action is a reaction” (John Rossomando, ‘Muslim Brotherhood Memo Encourages Burning Churches in Egypt,’ Algemeiner Journal, August 20, 2013).

ZOA National President Morton A. Klein said, “We are observing with horror the way this horrifying and murderous Muslim Brotherhood assault on Egyptian Christians has been proceeding for several days with hardly any international reaction. The ZOA strongly condemns these attacks on innocent Christians across Egypt by the radical Muslim Brotherhood mobs.

“There can be no just or valid reason for ignoring this blatant and murderous assault on Christians, solely because they are Christians, in Egypt.

“President Obama and world leaders, national and religious, should immediately and powerfully condemn these outrageous and monstrous assaults without delay.”

We would love to hear from you! Please fill out this form and we will get in touch with you shortly.
Trending Z
News August 21, 2013
ZOA Condemns U.S. State Dept. & U.S. Amb. Nides For Siding with Antisemitic, Discriminatory Palestinian & Hamas Terrorists re: the Temple Mount, Violating Jews’ Religious Freedom
News August 21, 2013
ZOA’s Klein JPost Op-Ed: There is Nothing Extreme About Israel’s New Government
Uncategorized August 21, 2013
FLASH: ISRAEL-JORDAN PEACE TREATY (1994) GUARANTEES JEWS ACCESS TO THE TEMPLE MOUNT – LET MY PEOPLE PRAY
Uncategorized August 21, 2013
ZOA Analysis: Most American Rabbis Who Are Boycotting Some Israeli Ministers Are From Extremist Left Wing Groups (J Street; T’ruah; JVP)
Center for Law & Justice
We work to educate the American public and Congress about legal issues in order to advance the interests of Israel and the Jewish people.
We assist American victims of terrorism in vindicating their rights under the law, and seek to hold terrorists and sponsors of terrorism accountable for their actions.
We fight anti-Semitism and anti-Israel bias in the media and on college campuses.
We strive to enforce existing law and also to create new law in order to safeguard the rights of the Jewish people in the United States and Israel.
Our Mission
ZOA STATEMENT
The ZOA speaks out for Israel – in reports, newsletters, and other publications. In speeches in synagogues, churches, and community events, in high schools and colleges from coast to coast. In e-mail action alerts. In op-eds and letters to the editor. In radio and television appearances by ZOA leaders. Always on the front lines of pro-Israel activism, ZOA has made its mark.
Related Articles
OP-ED ZOA Criticizes Obama For Supplying F-16s to Egypt’s Anti-Semitic Morsi & His Extremist Islamist Regime