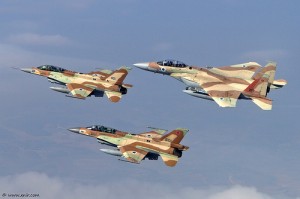 A recent poll has shown that clear majorities of Israelis support Israel undertaking military strikes against Iran, should this prove necessary to prevent Iran from becoming a nuclear power. A new Israel Hayom – New Wave Research poll shows that nearly two-thirds of Israelis –– 66% –– favor such a strike, as opposed to a mere 22% who oppose it. The same poll also found that:

ZOA National President Morton A. Klein said, “The Israeli public has a clearly realistic sense of the looming danger posed by an Iranian regime intent on obtaining nuclear weapons.

“Like people everywhere, the Israeli public wants to achieve the ending of the Iranian nuclear weapons program peacefully, but simply does not believe that negotiations will actually produce this vital result. That is why we are seeing today majority support for military action against Iran’s nuclear facilities, should this be the only avenue remaining to achieve the desired goal.”

We would love to hear from you! Please fill out this form and we will get in touch with you shortly.
Trending Z
News October 23, 2013
ZOA Condemns U.S. State Dept. & U.S. Amb. Nides For Siding with Antisemitic, Discriminatory Palestinian & Hamas Terrorists re: the Temple Mount, Violating Jews’ Religious Freedom
News October 23, 2013
ZOA’s Klein JPost Op-Ed: There is Nothing Extreme About Israel’s New Government
Uncategorized October 23, 2013
FLASH: ISRAEL-JORDAN PEACE TREATY (1994) GUARANTEES JEWS ACCESS TO THE TEMPLE MOUNT – LET MY PEOPLE PRAY
Uncategorized October 23, 2013
ZOA Analysis: Most American Rabbis Who Are Boycotting Some Israeli Ministers Are From Extremist Left Wing Groups (J Street; T’ruah; JVP)
Center for Law & Justice
We work to educate the American public and Congress about legal issues in order to advance the interests of Israel and the Jewish people.
We assist American victims of terrorism in vindicating their rights under the law, and seek to hold terrorists and sponsors of terrorism accountable for their actions.
We fight anti-Semitism and anti-Israel bias in the media and on college campuses.
We strive to enforce existing law and also to create new law in order to safeguard the rights of the Jewish people in the United States and Israel.
Our Mission
ZOA STATEMENT
The ZOA speaks out for Israel – in reports, newsletters, and other publications. In speeches in synagogues, churches, and community events, in high schools and colleges from coast to coast. In e-mail action alerts. In op-eds and letters to the editor. In radio and television appearances by ZOA leaders. Always on the front lines of pro-Israel activism, ZOA has made its mark.
Related Articles
OP-ED Egypt’s Morsi: “We Must Not Forget To Nurse Our Children And Grandchildren On Hatred Towards Zionists And Jews,” The “Descendants Of Apes and Pigs”