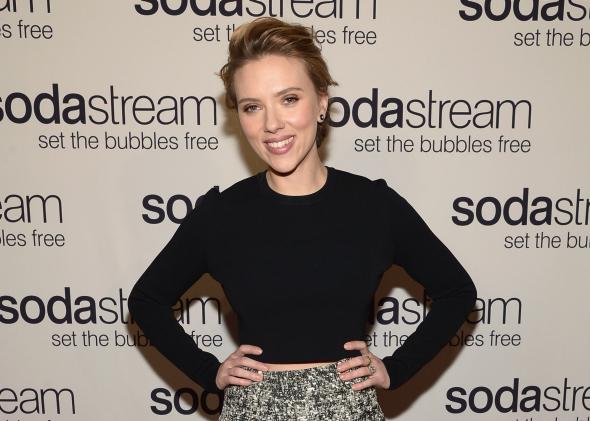 The Zionist Organization of America (ZOA) has praised actress Scarlett Johansson for her moral stance in resisting the extremist, anti-Israel Boycott, Divestment, Sanctions (BDS) group’s pressure to drop her endorsement of SodaStream, the Israeli company which operates a factory in Ma’ale Adumim in Judea, a city of 50,000 Jews directly adjacent to Jerusalem beyond the 1949 armistice lines.

BDS, which seeks to delegitimize Israel and assist those seeking to destroy her by having Israel labelled a war criminal for maintaining a Jewish presence in Judea, Samaria and the eastern half of Jerusalem, has mounted a campaign to have all Israeli products, businesses and communities in Judea/Samaria and eastern Jerusalem internationally boycotted. Johansson, the award-winning film actress, was pressured to drop her endorsement of SodaStream and criticized by Oxfam, the U.K.-based anti-Israel charitable organization, of which she had been for eight years an ambassador. Johansson resisted these pressures and resigned from Oxfam, a spokesman for the actress saying that she has a “fundamental difference of opinion in regards to the boycott, divestment and sanctions movement.” Johansson, who will continue as a brand ambassador for SodaStream, said, “I think it was really a natural partnership … I’ve been using SodaStream for five or six years” (Boaz Bismuth, ‘Don’t try educating Scarlett,’ Israel Hayom, January 31, 2014).

ZOA National President Morton A. Klein said, “Scarlett Johansson is to be strongly praised for having the moral and intellectual clarity to understand that BDS is nothing other than a a group seeking to delegitimize, politically ostracize and economically harm Israel. Unlike some other actors, who may have no great knowledge or interest in the issues, but who fear snide, adverse publicity –– to which Johansson has already been subject since making her decision to stay with  SodaStream –– Johansson courageously took a stand and told the BDS crowd to get lost. We praise her for that.

“Johansson knows that SodaStream, far from exploiting Palestinians, employs some 500 Palestinians. She understands that harming successful, non-discriminatory businesses is a gain to none and a loss to all.

“As the ZOA has stated numerous times, the Jewish presence in Judea/Samaria and eastern Jerusalem, the biblical, historical and religious heartland of the Jewish people, is entirely legal. The idea that Article 49 of the Fourth Geneva Convention, which prohibits Nazi-like deportations of populations, has no relevance or application to Israeli Jews moving of their own free will to Judea, Samaria and eastern Jerusalem.

“It says a good deal about the totalitarian mentality of the BDS groups that no difference of opinion on the efficacy of boycotting Israel is tolerated. It doesn’t matter if someone thinks that boycotting Israel doesn’t help either Israel or Palestinians, doesn’t enhance the prospects of peace or do anything positive; they must submit or be pilloried.

“As we say in Hebrew, kol hakavod to Scarlett Johansson for standing up to vicious bullies and Israel-haters.”

We would love to hear from you! Please fill out this form and we will get in touch with you shortly.
Trending Z
News February 5, 2014
ZOA Condemns U.S. State Dept. & U.S. Amb. Nides For Siding with Antisemitic, Discriminatory Palestinian & Hamas Terrorists re: the Temple Mount, Violating Jews’ Religious Freedom
News February 5, 2014
ZOA’s Klein JPost Op-Ed: There is Nothing Extreme About Israel’s New Government
Uncategorized February 5, 2014
FLASH: ISRAEL-JORDAN PEACE TREATY (1994) GUARANTEES JEWS ACCESS TO THE TEMPLE MOUNT – LET MY PEOPLE PRAY
Uncategorized February 5, 2014
ZOA Analysis: Most American Rabbis Who Are Boycotting Some Israeli Ministers Are From Extremist Left Wing Groups (J Street; T’ruah; JVP)
Center for Law & Justice
We work to educate the American public and Congress about legal issues in order to advance the interests of Israel and the Jewish people.
We assist American victims of terrorism in vindicating their rights under the law, and seek to hold terrorists and sponsors of terrorism accountable for their actions.
We fight anti-Semitism and anti-Israel bias in the media and on college campuses.
We strive to enforce existing law and also to create new law in order to safeguard the rights of the Jewish people in the United States and Israel.
Our Mission
ZOA STATEMENT
The ZOA speaks out for Israel – in reports, newsletters, and other publications. In speeches in synagogues, churches, and community events, in high schools and colleges from coast to coast. In e-mail action alerts. In op-eds and letters to the editor. In radio and television appearances by ZOA leaders. Always on the front lines of pro-Israel activism, ZOA has made its mark.
Related Articles
OP-ED BY: ZOA ZOA Applauds & Supports Letter From 15 Senators Urging Pres. Obama To Withdraw Hagel’s Nomination

OP-ED BY: Morton A. Klein, ZOA Jerusalem is Holy to Jews, Not to Muslims