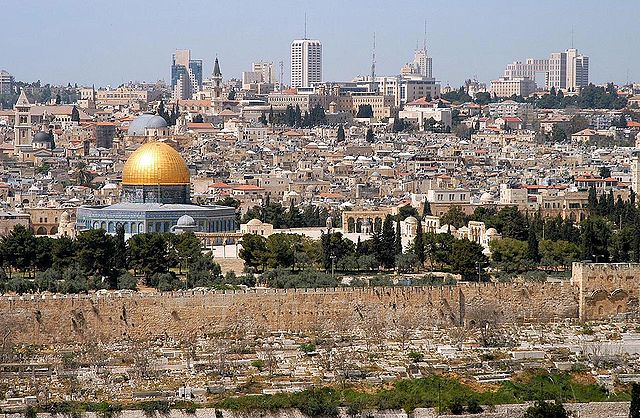 Jerusalem is Holy to Jews, Not to Muslims
News Op-Ed Press Release

This week marked Jerusalem Day, the anniversary of the reunification of Jerusalem under Jewish sovereignty during the 1967 Six Day War. It is not every day that an ancient people comes into repossession of its holiest city and age-old capital in a victorious war over enemies who, literally only a week before, had been waxing enthusiastic at the prospect of obliterating them.

Yet various governments withhold recognition of the city as Israel’s capital and call for its redivision – this time, with the eastern half of the city, illegally seized and annexed by Jordan in 1948, going to a proposed Palestinian state.

To understand why this is neither likely nor advisable, it is worth revisiting four key issues: history, demography, law and security.

History: Jerusalem is Judaism’s holiest city, mentioned more than 600 times in the Bible and alluded to in countless prayers. Major Jewish rituals, including the conclusion of the Passover Seder and Yom Kippur service, end with the age-old affirmation, ‘Next year in Jerusalem’ – that is, the historic, eastern half of the city with the Western Wall, Temple Mount and other historic Jewish sanctuaries — not the modern suburbs of western Jerusalem.

This was the capital of the Biblical Jewish kingdoms and the site of three thousand years of Jewish habitation—hence the ‘Jerusalem 3000’ celebrations initiated by the government of Yitzhak Rabin. Much of modern Israel also resides in the eastern half of the city, including the Jewish National Library (1892) and the Hebrew University (1925).

Against that, Jerusalem is not mentioned once in the Quran, is not the direction in which Muslims turn to pray (as do Jews), nor has it ever served as a Muslim or Arab capital. Though possessing Muslim holy sites, it was under Muslim control no more a capital city than Mecca or Medina in Saudi Arabia or Qom in Iran. Indeed, under Jordan, which then claimed to speak for Palestinian Arabs, Amman remained the country’s capital, not Jerusalem.

During the years of Jordan’s illegal occupation of eastern Jerusalem (1948-67), Jews were entirely driven out, its 58 synagogues there were destroyed, and Jewish gravestones were used to pave Jordanian roads and latrines. Jewish access to the Western Wall was forbidden, despite signed agreements. The city became a backwater and its Christian population also declined. No Arab ruler, other than Jordan’s King Hussein, visited it. As Abba Eban put it, “the secular delights of Beirut held more attraction.”

Significantly, when the historic city was in Arab hands, neither the PLO and nor Fatah charters even mentioned Jerusalem, let alone a Palestinian state of which it need be capital. This would never be obvious from the tenor and content of Palestinian, Arab and Muslim pronouncements on the city today, which are as emphatic as to the Arab, Muslim and Palestinian primacy of the city as they are in denying its Jewish provenance.

Demography: Jerusalem is the only city in the world in which Jews have formed a majority since the 1880s. The Statistical Abstract for Jerusalem 20012 shows the city to be 64% Jewish. When in 2009 President Obama controversially made an issue of Jewish construction in eastern Jerusalem, a poll showed that an overwhelming 72% of Israelis opposed freezing Jewish construction. A 2007 poll also showed that 59% of Israelis opposed, even in return for a peace agreement, Israel handing over to the Palestinian Authority (PA) various neighborhoods in the eastern half of Jerusalem.

Law: As with the West Bank, the eastern half of Jerusalem was unallocated territory under international law that had been illegally occupied by Jordan when Israel conquered it in 1967. It is additionally part of the territory earmarked for a Jewish homeland in 1920 at the San Remo Conference that drafted the League of Nations Charter. This decision, enshrined in the British Mandate for Palestine that shortly followed, has never been superseded by an internationally binding agreement. As the former president of the International Court of Justice, Stephen Schwebel has pointed out, Israel, having captured eastern Jerusalem in a war of self-defense against an illegal occupier, has a better claim to it than any other party.

Security:Any division of Jerusalem not only carves out part of the heart of the Jewish people but would also endanger Israel by introducing terrorists within rocket and rifle range of the western half of the city. Just as Sderot near Gaza has been subjected to years of incessant missile and mortar fire from territory handed over to Palestinian control, resulting in almost half its citizenry leaving for safety, the rest of Jerusalem could share the same fate if the eastern half of the city were given to PA control.

One day, Arab/Jewish peace may come about. But there are no good reasons why Jerusalem’s redivision – an act that would stunt the city, uproot Jewish habitations, overrule its resident majority, negate Israel’s legal title and endanger its inhabitants – should be part of any settlement.

Morton A. Klein is National President of the Zionist Organization of America (ZOA).

We would love to hear from you! Please fill out this form and we will get in touch with you shortly.
Trending Z
News May 13, 2013
At ZOA Gala Secy Pompeo Gave the Greatest, Most Pro-Israel Speech Ever Delivered by a Public Official
News May 13, 2013
Dershowitz in Arutz 7: NYC’s Temple Emanu-El Silences a Pro-Israel Voice & Promotes an Anti-Israel Voice
Uncategorized May 13, 2013
Jewish Press: Has Deborah Lipstadt Undercut Both Herself and Future Antisemitism Envoys?
News May 13, 2013
NEW YORK POST: Democratic Leaders’ Shocking Silence Over Attacks on Israel by Fellow Dems
Our Mission
ZOA STATEMENT
The ZOA speaks out for Israel – in reports, newsletters, and other publications. In speeches in synagogues, churches, and community events, in high schools and colleges from coast to coast. In e-mail action alerts. In op-eds and letters to the editor. In radio and television appearances by ZOA leaders. Always on the front lines of pro-Israel activism, ZOA has made its mark.
Center for Law & Justice
We work to educate the American public and Congress about legal issues in order to advance the interests of Israel and the Jewish people.
We assist American victims of terrorism in vindicating their rights under the law, and seek to hold terrorists and sponsors of terrorism accountable for their actions.
We fight anti-Semitism and anti-Israel bias in the media and on college campuses.
We strive to enforce existing law and also to create new law in order to safeguard the rights of the Jewish people in the United States and Israel.
Related Articles
OP-ED Abbas’ Fatah/P.A. New Logo Features All Of Israel Only As ‘Palestine’