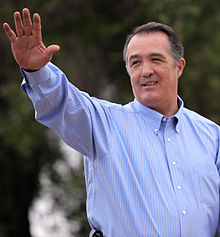 The Zionist Organization of America (ZOA) has praised Congressman Trent Franks (R-AZ), agreeing with his recent forthright statements that Secretary of State John Kerry’s Munich speech amounted to the delivering of a veiled threat to Israel to accommodate American negotiating ideas or else face isolation and boycott; that the Obama Administration has adopted an “adversarial stance” towards Israel; and that the Geneva interim nuclear deal signed last November by the Obama Administration is “fatally flawed” and will allow Iran to become a nuclear break-out state.

In his remarks in an interview given during a conference in Washington dedicated to ‘American Security and the Iranian Bomb: Analyzing Threats at Home and Abroad,’ Congressman Franks said,

Secretary Kerry “seems to be divorced from the … reality … Mr Kerry recently kind of warned Israel that if they didn’t follow his plan, that they might be boycotted, and it was a sort of veiled threat, in my judgment. And I think it’s outrageous that this Administration has sort of become the chief lobbyist for Iran and has now extended them the ability to have a protected protocol going forward to be able to enrich uranium, and yet our best friend on the planet, our most dedicated and committed ally in the world, Israel, they’re having to be the object of … veiled threats. I’m trying to be calm and collected here, but it’s an outrageous thing … I think the [Geneva interim nuclear agreement] is fatally flawed, simply because is doesn’t deal with the two critically most important issues and that is: Iran must not have the stockpile for the ability to enrich uranium, or to produce plutonium, but under this agreement they’re able to continue to enrich uranium … it’s not even an agreement to prevent them coming to a nuclear threshold, it has now become a challenge where we’re looking at a [nuclear] break-put … I’m deeply concerned, but I take great encouragement that Israel is the toughest kid on the block and they still have a big friend here that’s got the stars and stripes on our shoulders, and were never going to turn our backs on them … I absolutely believe that there are two things that prevent Iran gaining a nuclear weapons capability, one is a direct intervention that destroys that capability militarily, or,  two, the absolute conviction in the minds of the Iranian leaders that this will occur if they continue. Unfortunately, this agreement undermines that latter possibility … when we deal with leaders like this  are jihadist in nature, I have to suggest to you that appeasement does increase the chances of being forced into a military situation … it’s hard for me to admit that, but unfortunately, the United States has become adversarial towards Israel and has built in some bias towards some of the Palestinian groups when they won’t even acknowledge Israel’s right to exist, Abbas came out just again that he won’t acknowledge Israel’s right to exist … how do you have some sort of negotiations with a country that wont even recognize the other negotiator’s position and right right to exist in the world … every time Israel has given up land, it’s only brought terrorism closer” (Ari Soffer, ‘’Israel is not an ‘Occupier,”’ Israel National News, February 14, 2014).

Secretary Kerry “seems to be divorced from the … reality …”

ZOA National President Morton A. Klein said, “Congressman Franks is to be applauded for his candor and clarity of vision on these matters.

“The ZOA agrees with Congressman Franks that the Obama Administration is indulging in a hostile tilt at Israel, complete with veiled threats, while indulging the Palestinian Authority, which has done nothing to merit American promotion of Israeli concessions.

“Any reasonable analysis of Secretary Kerry’s Munich speech will show, as we argued at the time, that Secretary Kerry basically implied that, if talks fail, boycotting and isolating Israel is both inevitable and understandable. This means only one thing –– Secretary Kerry is saying that Israel will be held responsible and that boycotts are to be expected. He did not say that the U.S. would oppose and condemn such boycotts and use its diplomatic and economic power to oppose these developments. To the contrary, he implied that the Obama Administration would do nothing.

“Similarly, Trent Franks is right to state that the Geneva interim nuclear deal is ‘fatally flawed.’ The ZOA argued at the time that the Geneva agreement is a ‘disaster,’ which ‘permits Iran to retain intact all the essential elements of its nuclear weapons program’ and that it foreshadows ‘the end of the sanctions regime’ –– all observations which Congressman Franks has succinctly expressed.

“Trent Franks understands all this and has said so forthrightly. We praise him for doing so.”

We would love to hear from you! Please fill out this form and we will get in touch with you shortly.
Trending Z
News February 25, 2014
New Biden Nominees Opposed Abraham Accords & Involved in Israeli Election Interference
Uncategorized February 25, 2014
ZOA Letter to DOJ & FBI on New “Mapping Project” Antisemitic Threat by ZOA Pres. Morton Klein, Dir. of Research/Special Projects Liz Berney, Esq., Dir. Center for Law & Justice Susan Tuchman, Esq.
News February 25, 2014
ZOA’s Condemnation of Black Lives Matter Defended by JNS’ Tobin: Jews Supporting BLM Empowered Antisemitism
Op-Ed February 25, 2014
ZOA’s Mort Klein JPost Op-Ed: BDS Mapping Project Targets Every Jew, Including Left Wing, Israelophobic Jews
Center for Law & Justice
We work to educate the American public and Congress about legal issues in order to advance the interests of Israel and the Jewish people.
We assist American victims of terrorism in vindicating their rights under the law, and seek to hold terrorists and sponsors of terrorism accountable for their actions.
We fight anti-Semitism and anti-Israel bias in the media and on college campuses.
We strive to enforce existing law and also to create new law in order to safeguard the rights of the Jewish people in the United States and Israel.
Our Mission
ZOA STATEMENT
The ZOA speaks out for Israel – in reports, newsletters, and other publications. In speeches in synagogues, churches, and community events, in high schools and colleges from coast to coast. In e-mail action alerts. In op-eds and letters to the editor. In radio and television appearances by ZOA leaders. Always on the front lines of pro-Israel activism, ZOA has made its mark.
Related Articles
OP-ED Abbas’ Fatah/P.A. New Logo Features All Of Israel Only As ‘Palestine’