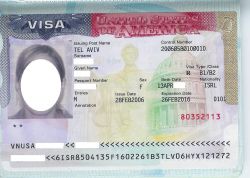 The Zionist Organization of America (ZOA) has expressed concern at reports in the Israeli press that the Obama Administration is increasingly rejecting requests from Israeli citizens for visas to visit the United States. According to U.S. State Department records consulted by these reports, during 2013, 9.7% of Israelis who requested visas –– some 12,000 people –– were denied. This is a sharp rise on the figures for 2012, in which 5.4% of Israelis requesting visas had their applications rejected, itself a steep rise on the figure for just a few years ago, 2007, when only 2.5% of Israelis were rejected for visas. This is more than a three-fold rise in visa rejections in a mere seven years.

A report in Haaretz quotes an unnamed Israeli official saying that the rise in visa rejections probably stems from U.S. reluctance to allow Israel entry into the Visa Waiver Program. That policy allows travelers from 37 countries to enter the U.S. for business or leisure as visitors for up to 90 days without a visa. The U.S. has a ‘white list’ of countries whose citizens can come to the U.S. without a visa, but only countries with a visa rejection rate of less than 3% are put on this list. The recent growth in U.S. visa request rejections for Israelis forced Israel off that list.

This is more than a three-fold rise in visa rejections in a mere seven years.

The official said, “We have for years been waiting to drop below the 3 percent mark in order to obtain visa exemptions, but they keep raising the bar … In our view, this is being done artificially, with requests being denied for no good reason. In all other respects, we qualify for the program.”

Israel’s entry into the waiver program was included in a pair of broader U.S.-Israel bills last year that called for Israel to be granted a waiver if it, “has made every reasonable effort, without jeopardizing the security of the State of Israel, to ensure that reciprocal travel privileges are extended to all United States citizens” (‘More Israelis being denied U.S. tourist visas, report says,’ Haaretz, February 24, 2014).

ZOA National President Morton A. Klein said, “We are deeply concerned to learn that Israelis, in contrast to the situation in past years, are being rejected in record numbers to visit the United States for no apparent, justifiable reason. The absence of reasonable ground for these rejections leads only to the conclusion that the rejections are political in nature. In particular, as has already been suggested by Israeli officials, an effort has been made to prevent Israel from joining 37 favored nations whose citizens can travel to the U.S. for up to three months without visa.

“This is disconcerting, especially when coupled with other events that have occurred during the course of the Obama Administration ––

“This record –– to which much could be added, not least Secretary of State John Kerry’s recent veiled threat to Israel of boycotts and isolation if Israel does not accede to his peace proposals –– suggests that the Obama Administration is working overtime to fundamentally transform the U.S/Israeli relationship into one that is more distant, less deep, more confrontational and less special.

“The ZOA urges all pro-Israel organizations to demand an explanation from the Administration for the large and worrying upsurge of what appears to be politically-motivated rejections of Israeli visitor visa applications.

“Americans have the right to know why the citizens of one of America’s closest and oldest friends are being denied visas in record rates and numbers.”

We would love to hear from you! Please fill out this form and we will get in touch with you shortly.
Trending Z
Uncategorized February 27, 2014
ZOA Analysis: Most American Rabbis Who Are Boycotting Some Israeli Ministers Are From Extremist Left Wing Groups (J Street; T’ruah; JVP)
Uncategorized February 27, 2014
ZOA: Israel’s Reasonable Judicial Reform Proposals Are Good for Democracy, the Rule of Law and the Economy
News February 27, 2014
ZOA is Disappointed, Offended and Frightened by 211 U.S. House Votes Supporting Jew-Hating, Israel-Hating Rep. Ilhan Omar
Uncategorized February 27, 2014
Israel’s “Right of Return” Grandparent Clause is De-Judaizing the Jewish State – Eliminate It
Center for Law & Justice
We work to educate the American public and Congress about legal issues in order to advance the interests of Israel and the Jewish people.
We assist American victims of terrorism in vindicating their rights under the law, and seek to hold terrorists and sponsors of terrorism accountable for their actions.
We fight anti-Semitism and anti-Israel bias in the media and on college campuses.
We strive to enforce existing law and also to create new law in order to safeguard the rights of the Jewish people in the United States and Israel.
Our Mission
ZOA STATEMENT
The ZOA speaks out for Israel – in reports, newsletters, and other publications. In speeches in synagogues, churches, and community events, in high schools and colleges from coast to coast. In e-mail action alerts. In op-eds and letters to the editor. In radio and television appearances by ZOA leaders. Always on the front lines of pro-Israel activism, ZOA has made its mark.
Related Articles
OP-ED ZOA Praises ADL, AJC Call For Further Review of Hagel’s Record – AIPAC & Others Silent