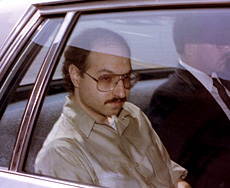 The Zionist Organization of America (ZOA), which has fought long and hard to secure the release of long-jailed Jonathan Pollard by lobbying legislators, meeting government officials, writing articles, letters and press releases urging his release, nonetheless and with a heavy heart opposes the Obama Administration’s proposal that he be freed in return for unjust, unwise and immoral Israel concessions.

‘Mort, make it clear to the Israeli officials not to make any concessions, not of any land, or of freezing construction of Jewish homes in Judea/Samaria, in order to obtain my release.’

In a deal believed to be in the pipeline, Israel would release the fourth batch of convicted and jailed Palestinian terrorists it agreed to release last year. This would include 14 Arab Israeli prisoners, something Israel has never previously done. Israel would also release a further 400 prisoners “without blood on their hands” –– meaning only that the terrorists in question failed to murder Jews in the course of the terrorist assaults which they either carried out, assisted or planned. Lastly, Israel would also freeze Jewish construction in Judea/Samaria. All Mahmoud Abbas’ Palestinian Authority (PA) would have to do is to agree to keep negotiating for another 12 months and desist from unilateral actions against Israel at the UN –– something it is already prohibited from doing under the terms of the Oslo Accords, which it has never implemented anyway.

ZOA National President Morton A. Klein said, “Over the course of decades, I have personally spoken with Jonathan Pollard over fifty times, most recently, a few years ago. He also urged me several times thus –– ‘Mort, make it clear to the Israeli officials not to make any concessions, not of any land, or of freezing construction of Jewish homes in Judea/Samaria, in order to obtain my release.’

“Looking back, remarkably, the bulk of my conversations with Jonathan Pollard consisted of how we can help Israel, not of how the ZOA could help Jonathan in his horrific personal situation. He also he thanked me strongly for the work the ZOA does for Israel.

“Jonathan Pollard’s release should not be conditional on any Israeli concessions after he has served 25 years longer than any other American convicted of a similar crime. It is long past time that he should be freed.

“As Senator John McCain said today, ‘It’s disgusting … I favor his release, I think he’s served long enough, but to be used in this fashion, it’s disgraceful.”

We would love to hear from you! Please fill out this form and we will get in touch with you shortly.
Trending Z
News April 2, 2014
ZOA Condemns U.S. State Dept. & U.S. Amb. Nides For Siding with Antisemitic, Discriminatory Palestinian & Hamas Terrorists re: the Temple Mount, Violating Jews’ Religious Freedom
News April 2, 2014
ZOA’s Klein JPost Op-Ed: There is Nothing Extreme About Israel’s New Government
Uncategorized April 2, 2014
FLASH: ISRAEL-JORDAN PEACE TREATY (1994) GUARANTEES JEWS ACCESS TO THE TEMPLE MOUNT – LET MY PEOPLE PRAY
Uncategorized April 2, 2014
ZOA Analysis: Most American Rabbis Who Are Boycotting Some Israeli Ministers Are From Extremist Left Wing Groups (J Street; T’ruah; JVP)
Center for Law & Justice
We work to educate the American public and Congress about legal issues in order to advance the interests of Israel and the Jewish people.
We assist American victims of terrorism in vindicating their rights under the law, and seek to hold terrorists and sponsors of terrorism accountable for their actions.
We fight anti-Semitism and anti-Israel bias in the media and on college campuses.
We strive to enforce existing law and also to create new law in order to safeguard the rights of the Jewish people in the United States and Israel.
Our Mission
ZOA STATEMENT
The ZOA speaks out for Israel – in reports, newsletters, and other publications. In speeches in synagogues, churches, and community events, in high schools and colleges from coast to coast. In e-mail action alerts. In op-eds and letters to the editor. In radio and television appearances by ZOA leaders. Always on the front lines of pro-Israel activism, ZOA has made its mark.
Related Articles
OP-ED ZOA Criticizes Obama For Supplying F-16s to Egypt’s Anti-Semitic Morsi & His Extremist Islamist Regime