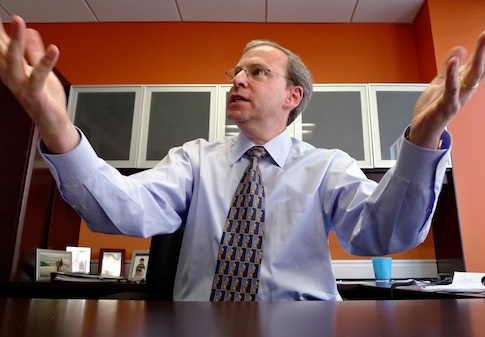 J-Street’s bid was rejected despite the fact that J-Street launched a major campaign to gain admission to the Conference.  J-Street contacted every member of the Conference (including the ZOA).

ZOA President Mort Klein noted, “The member organizations of the Conference correctly refused to give credibility to a group that works day and night against the very purposes that are at the heart of the Conference’s raison d’etre.  The key stated missions of the Conference are ‘mobilizing support to halt Iran’s nuclear program,’ ‘counter[ing] the global campaign to delegitimize Israel and the Jewish people,’ ‘bolster[ing] Israel’s security’ and combating terrorism and anti-Semitism. ”

An examination of J-Street’s activities confirms why the Conference members voted correctly.

J-Street’s pro-Iran regime activities are thus in direct conflict with the Conference of Presidents’ key mission of mobilizing support to halt the existential threat of Iran’s nuclear weapons.

Another key purpose of the Conference of Presidents is combating the delegitimization of Israel.

By contrast, J-Street persistently defames and delegitimizes Israel on college campuses and in its conferences.  J-Street and its campus arm (J Street U) bring to college campuses and conferences leaders of the Boycott, Divestment and Sanctions movement to economically destroy Israel (BDS), the “Breaking the Silence” group that defames Israel and the IDF, including falsely accusing the IDF of committing brutal atrocities against Palestinians, and anti-Israel Muslim leaders.  J-Street videos call Israel the “oppressor” and portray the Palestinians as the “oppressed,” and liken the IDF to Hamas.  (See J-Street’s 2011 Conference “Giving Voices to our Values” video, reproduced at “J Street and the Jewish War Against Israel,” by Caroline Glick.)

J-Street’s pro-Iran regime activities are … in direct conflict with the Conference of Presidents’ key mission of mobilizing support to halt the existential threat of Iran’s nuclear weapons.

J-Street also supports worldwide “Lawfare” and “Courtroom Intifada” against Israel (bringing legal actions against Israel and Israeli officials), by bringing speakers for these movements to J-Street conferences.  J-Street conference speakers include the legal representative of virulent anti-Israel NGOs, and of a Canadian lawsuit seeking a judicial declaration that Israel is guilty of committing “war crimes” and that Israel’s security barrier is illegal.

J-Street also promoted and disseminated the Goldstone Report, which falsely accused Israel of committing war crimes in Gaza.  J-Street also introduced members of Congress to Mr. Goldstone, to further propagate these false accusations against Israel.  A J-Street official ghost-wrote Goldstone’s letter criticizing a Congressional resolution that condemned the Goldstone report.  J-Street took no corrective action when Goldstone recanted much of his report.  Instead, J-Street continues to make false accusations regarding Israel’s actions in Gaza, further undermining and delegitimizing Israel and the Jewish people.

J-Street also lobbied to have President Obama vote for an anti-Israel U.N. resolution – a clear conflict with the Conference of Presidents’ mission.

And, despite Hamas calls for murdering every Jew and Israel’s destruction, and despite the fact that the U.S. State Department recognizes that Hamas is a terrorist organization, just last week (on April 23), J-Street promoted “aggressively” pushing a framework for a Hamas-Fatah State.  Promoting a Hamas-Fatah state framework surely conflicts with the Conference of Presidents’ goal of combating terrorism and anti-Semitism.

ZOA Pres. Klein further noted, “The vote against J-Street confirms that the ‘big tent philosophy’ must never be a ‘universal tent’ philosophy.  Everyone agrees that there must be a red line.  J-Street has clearly crossed that line by engaging in activities that defame and delegitimize Israel and are antithetical to the Conference’s purposes.  J-Street placed itself outside Conference of President’s expansive ‘big tent.’”

As liberal former Congressman and Chair of the Mideast Subcommittee Gary Ackerman noted when disassociating himself from J-Street, “J-Street is not an organization with which I wish to be associated . . . The [J-Street] decision to endorse the Palestinian and Arab effort to condemn Israel in the U.N. Security Council is not the choice of a concerned friend trying to help.”

Liberal Harvard Law School Professor Alan Dershowitz likewise explained, “J Street . . . calls itself pro-Israel and pro peace but . . . always seems to be taking positions that are anti-Israel and pro-Palestinian. . . . [I]t is imperative that J Street’s hypocrisy be exposed. . . . J Street invites BDS* supporters and those who oppose Israel’s right to exist as the nation-state of the Jewish people to speak at its events . . . J Street only wants people to hear views [of] the anti-Israel hard left . . . . It categorically refuses to allow its members to hear views that are more centrist and more pro-Israel, such as my own.”   (“Dershowitz Eviscerates Jeremy Ben Ami and J Street,” Haaretz, March 29, 2014).

ZOA actively campaigned against J-Street’s admission to the Conference of Presidents.  ZOA called member organizations and distributed 18 bullet points as to why J-Street should not be admitted to the Conference, along with links to ZOA’s “JStreetExposed.com” website, which contains further information on J-Street’s anti-Israel activities, and quotes condemning J-Street from liberal officials who have disassociated themselves from J-Street.

The bullet points and “JStreetExposed.com” website also provide information on J-Street’s donors, including the self-described anti-Zionist George Soros, as well as Genevieve Lynch (who is a prominent board member of an apparent agent for the Iranian regime, NIAC – the National Iranian American Council) and leading Muslims.  These individuals’ financial backing of J-Street further evidences J-Street’s hostile-to-Israel agenda.

Mr. Klein also spoke at the Conference’s meeting yesterday.  (Each member organization that wished to speak was able to do so.)  ZOA would also like to thank Andrew Borans, of the AEPi fraternity, who eloquently described J-Street’s harmful activities on American college campuses during the meeting.

ZOA also wishes to thank all the member organizations of the Conference who participated in the membership voting process, and to thank the Conference of Presidents for managing the entire process fairly and impartially.

We would love to hear from you! Please fill out this form and we will get in touch with you shortly.
Trending Z
News May 1, 2014
At ZOA Gala Secy Pompeo Gave the Greatest, Most Pro-Israel Speech Ever Delivered by a Public Official
News May 1, 2014
Dershowitz in Arutz 7: NYC’s Temple Emanu-El Silences a Pro-Israel Voice & Promotes an Anti-Israel Voice
Uncategorized May 1, 2014
Jewish Press: Has Deborah Lipstadt Undercut Both Herself and Future Antisemitism Envoys?
News May 1, 2014
NEW YORK POST: Democratic Leaders’ Shocking Silence Over Attacks on Israel by Fellow Dems
Our Mission
ZOA STATEMENT
The ZOA speaks out for Israel – in reports, newsletters, and other publications. In speeches in synagogues, churches, and community events, in high schools and colleges from coast to coast. In e-mail action alerts. In op-eds and letters to the editor. In radio and television appearances by ZOA leaders. Always on the front lines of pro-Israel activism, ZOA has made its mark.
Center for Law & Justice
We work to educate the American public and Congress about legal issues in order to advance the interests of Israel and the Jewish people.
We assist American victims of terrorism in vindicating their rights under the law, and seek to hold terrorists and sponsors of terrorism accountable for their actions.
We fight anti-Semitism and anti-Israel bias in the media and on college campuses.
We strive to enforce existing law and also to create new law in order to safeguard the rights of the Jewish people in the United States and Israel.
Related Articles
OP-ED Hearings Reveal More Hagel Horrors – U.S. Is “World’s Bully, Israel is War Criminal and Committed “Sickening Slaughter”