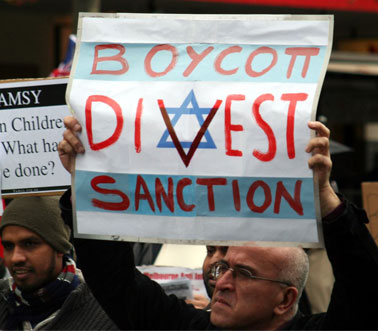 The Zionist Organization of America (ZOA) has condemned the France, Spain and Italy for issuing ‘warnings’ to their businesses not to conduct commerce with Jews living in Judea/Samaria, eastern Jerusalem and the Golan Heights. In recent days, Spain and Italy published advisories, warning their citizens against doing business with ‘settlements,’ just days after a similar advisory was published in the French-language section of the French Foreign Ministry website.

This disgraceful position taken by France, Spain and Italy mean they actually favor Israel giving the Golan Heights to the monstrous Syrian dictator and butcher, Bashar al-Assad, and the remainder of Judea/Samaria still under Israeli control to the Hamas/Fatah Palestinian Authority (PA) regime. Both the Fatah Constitution (Article 12) and the Hamas Charter (Article 15) call for the destruction of Israel and the Hamas Charter also calls (Article 7) for he worldwide murder of Jews. It is even more shocking that the French, Italian and Spanish advisories came after Hamas/Fatah unity government agreement and the Hamas kidnapping of the three Israeli teenagers, since murdered by their kidnappers. It is to a regime with such elements that these governments want Israel to make dangerous concessions.

ZOA National President Morton A. Klein said, “We condemn this latest attempt to penalize Israel and siding with Israel’s enemies by falsely attempting to have Israel treated as acting illegally by permitting Israeli Jews to live in these territories.

“As we have indicated many times, the claim that it is illegal for Jews to move to, live in or build homes in Judea/Samaria and eastern Jerusalem is a falsehood and absurdity for which these governments should be ashamed.

“Last year a report issued under the chairmanship of former Israeli Supreme Court Justice Edmund Levy affirmed the legality under applicable international law of Jewish residence in the territories.

“Indeed, the law was clear long before Justice Levy produced his report: the territory of the Judea/Samaria (West Bank) was earmarked for Jewish settlement in 1920 at the San Remo Conference that drafted the League of Nations Charter. This decision, enshrined in the British Mandate for Palestine that shortly followed, has never been superseded by an internationally binding agreement.

“The 1993 Oslo Accords, which the Palestinians Arabs signed, contain no prohibition on the existence and growth of these Jewish communities. Jewish rights remain unimpaired. Whether one supports or opposes Jewish residence in Judea/Samaria, all should be able to agree on this.

“The usual basis for this false claim is that Jewish residence in the territories supposedly contravenes  Article 49 of the 4th Geneva Convention, but this is nonsense.

“Moreover, the 4th Geneva Convention deals only with territories belonging to a sovereign power. In contrast, Judea/Samaria, illegally seized by Jordan in 1948 and captured by Israel following Jordanian attack in 1967, remains unallocated territory under international law. Article 49 is irrelevant in this case.

“It is amazing that, at a time that the Fatah/PA enters a unity government with Hamas, a U.S.- and European Union-recognized terrorist group that calls in its Charter for the murder of Jews, these governments side with the Fatah/Hamas efforts to have these territories made judenrein.

“If these governments had their way, Israel would have relinquished the Golan Heights to the Assad regime. Imagine what that might mean today for the lives and security of Israel’s citizens in northern Israel. Yet, they side right now with Assad, who has murdered tend of thousands of Syrians.

“We know that the PA is relentlessly urging the Europeans to adopt these absurd, biased positions. We know that, in February, Palestinian officials urged the president of the European Parliament, Martin Schulz, to push for tougher sanctions against Israeli ‘settlements.’

“We also know that the Palestinians were incensed when the Australian government recently and rightly ceased to refer to eastern Jerusalem as occupied. To have this fiction exposed undermines the fraudulent case the PA has manufactured for international campaigns to harm Israel.”

We would love to hear from you! Please fill out this form and we will get in touch with you shortly.
Trending Z
Uncategorized July 1, 2014
FLASH: ISRAEL-JORDAN PEACE TREATY (1994) GUARANTEES JEWS ACCESS TO THE TEMPLE MOUNT – LET MY PEOPLE PRAY
Uncategorized July 1, 2014
ZOA Analysis: Most American Rabbis Who Are Boycotting Some Israeli Ministers Are From Extremist Left Wing Groups (J Street; T’ruah; JVP)
Uncategorized July 1, 2014
Israel’s “Right of Return” Grandparent Clause is De-Judaizing the Jewish State – Eliminate It
Uncategorized July 1, 2014
Exclusive: ZOA Accuses Ilhan Omar of Hating the U.S. ‘as Much as Israel,’ Lauds Kevin McCarthy for ‘Throwing Her Off the HFAC’
Center for Law & Justice
We work to educate the American public and Congress about legal issues in order to advance the interests of Israel and the Jewish people.
We assist American victims of terrorism in vindicating their rights under the law, and seek to hold terrorists and sponsors of terrorism accountable for their actions.
We fight anti-Semitism and anti-Israel bias in the media and on college campuses.
We strive to enforce existing law and also to create new law in order to safeguard the rights of the Jewish people in the United States and Israel.
Our Mission
ZOA STATEMENT
The ZOA speaks out for Israel – in reports, newsletters, and other publications. In speeches in synagogues, churches, and community events, in high schools and colleges from coast to coast. In e-mail action alerts. In op-eds and letters to the editor. In radio and television appearances by ZOA leaders. Always on the front lines of pro-Israel activism, ZOA has made its mark.
Related Articles
OP-ED BY: Morton A. Klein, ZOA Jerusalem is Holy to Jews, Not to Muslims