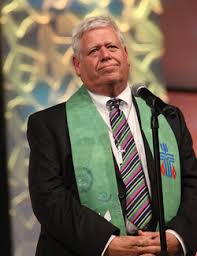 The Zionist Organization of America (ZOA) has condemned the vote by the General Assembly of the Presbyterian Church USA to divest from three companies –– Caterpillar, Motorola Solutions and Hewlett-Packard –– that do business with Israel as anti-Semitism. As the Harvard University Law Professor Alan Dershowitz has written, “The BDS [Boycott, Sanctions, Divestment] movement is immoral because it promotes false views regarding the nation state of the Jewish people, exaggerates its flaws and thereby promotes a new variation on the world’s oldest prejudice, namely anti-Semitism.”

The Presbyterian Church’s Moderator, Rev. Heath Rada, has absurdly claimed that the Church’s vote to divest from these three companies “does not mean an alignment with the overall strategy of the global BDS [Boycott, Sanctions, Divestment movement].” In fact, the BDS movement seeks to delegitimize Israel and assist those seeking to destroy her by having Israel labelled a war criminal for maintaining a Jewish presence in Judea/Samaria and the eastern half of Jerusalem. To that end, it has mounted a campaign to establish a worldwide boycott all Israeli products and businesses as well as of companies doing business with Israel.

ZOA National President Morton A. Klein said, “We are disgusted, but not surprised, at the vote by the Presbyterian Church USA to divest from the three companies. Israel-haters within the Church tried, but failed, to achieve this goal two years ago, and have been working hard to succeed this time around.

“This is not an isolated act of anti-Israel hostility from the Church. An official church pamphlet, ‘Zionism Unsettled,’ describes Zionism as ‘a struggle for colonial and racist supremacist privilege.’ It has also considered labeling Israel an Apartheid state and divested two years ago from companies doing business with Jewish communities in Judea/Samaria.

“I myself remember being stunned when I attended a sermon at the Bryn Mawr Presbyterian Church outside Philadelphia, the largest and wealthiest church in the Philadelphia area, in which the pastor called the Israelis ‘the real terrorists.’ He also wrote that the ‘Israelis stole the land from poor Palestinian shepherds.’ I wrote several articles regarding this experience at the time.

“This is not an isolated act of anti-Israel hostility from the Church. An official church pamphlet, ‘Zionism Unsettled,’ describes Zionism as ‘a struggle for colonial and racist supremacist privilege.’”

“It is an insult to our intelligence for Rev. Rada to claim that this latest vote does not imply endorsement of the vicious anti-Israel agenda of the BDS movement. The centerpiece of the BDS movement’s anti-Israel campaign has been to boycott and divest from companies doing business with Israel. How exactly does divesting from Caterpillar, Motorola Solutions and Hewlett-Packard not conform to this objective?

“Indeed, the Church’s Ruling Elder, Rick Ufford-Chase, has openly proclaimed that, ‘Divestment is not the end, it’s the beginning of non-violent means to fight the oppression of our Palestinian brothers and sisters.’ In short the Church intends to take more far-reaching anti-Israel steps.

“Elizabeth Terry Dunning, chairwoman of the Church’s denomination’s Mission Responsibility Through Investment, has asserted that, ‘We’ve tried to change the products and processes of these corporations in which we are invested and which are causing human hurt.’

“Really? The three companies from which the church is divesting provide high technology to Israeli security and police forces. Despite her declared concern for innocents, Ms. Dunning would seem to prefer that innocent Israeli men, women and children be denied these protections from Palestinian terrorism –– something which causes a great deal of ‘human hurt.’

“That the Church can pass this unprincipled and morally twisted resolution so soon after the formation of a Fatah/Palestinian Authority (PA) unity government with Hamas, whose Charter calls for the destruction of Israel and the murder of Jews –– and which Rev. Rada, to the best of my knowledge, has not condemned ––  only shows how absurdly and perniciously biased this decision is.

“If the Presbyterian Church USA wants to take a moral stance, it should be boycotting the PA, which has refused to disarm terrorists and confiscate their weaponry, while permitting the incitement to hatred and murder in Palestinian society that feeds the conflict, constantly consuming lives.

“The ZOA applauds the efforts of Presbyterian leaders like Cindy Jarvis, head of Presbyterians for Middle East Peace, who is fighting the abomination of the Church’s decision and attitude in this and related matters.

“We urge all genuinely moderate, decent Presbyterian clergy and laymen to raise their voices  against this dishonest, repellent and immoral resolution.”

We would love to hear from you! Please fill out this form and we will get in touch with you shortly.
Trending Z
News July 8, 2014
New Biden Nominees Opposed Abraham Accords & Involved in Israeli Election Interference
Uncategorized July 8, 2014
ZOA Letter to DOJ & FBI on New “Mapping Project” Antisemitic Threat by ZOA Pres. Morton Klein, Dir. of Research/Special Projects Liz Berney, Esq., Dir. Center for Law & Justice Susan Tuchman, Esq.
News July 8, 2014
ZOA’s Condemnation of Black Lives Matter Defended by JNS’ Tobin: Jews Supporting BLM Empowered Antisemitism
Op-Ed July 8, 2014
ZOA’s Mort Klein JPost Op-Ed: BDS Mapping Project Targets Every Jew, Including Left Wing, Israelophobic Jews
Center for Law & Justice
We work to educate the American public and Congress about legal issues in order to advance the interests of Israel and the Jewish people.
We assist American victims of terrorism in vindicating their rights under the law, and seek to hold terrorists and sponsors of terrorism accountable for their actions.
We fight anti-Semitism and anti-Israel bias in the media and on college campuses.
We strive to enforce existing law and also to create new law in order to safeguard the rights of the Jewish people in the United States and Israel.
Our Mission
ZOA STATEMENT
The ZOA speaks out for Israel – in reports, newsletters, and other publications. In speeches in synagogues, churches, and community events, in high schools and colleges from coast to coast. In e-mail action alerts. In op-eds and letters to the editor. In radio and television appearances by ZOA leaders. Always on the front lines of pro-Israel activism, ZOA has made its mark.
Related Articles
OP-ED Fmr. Secy. Colin Powell: Defense Dept. Influences Presidential Policy