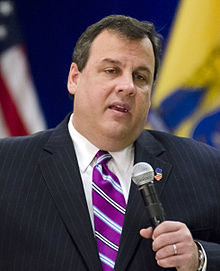 “While attending a meeting of the National Governors Association, of which he is president, Christie said that organizations like Hamas ‘need to be dealt with firmly’, and said the President Obama has not done that during his presidency.

“Christie added, ‘Israel is not sure that they have Americas full support like they used to, and that’s a real failure of this presidency. And I think the unrest you see in the Middle East is caused in some measure, not completely, by the fact that this president has not acted in a decisive, consistent way.’ President Obama should be more clear in ‘having America be a forceful voice in favor of a democracy like Israel, and be condemning in the strongest possible terms and with actions the things that are being done by Hamas against Israel.’”

We would love to hear from you! Please fill out this form and we will get in touch with you shortly.
Trending Z
News July 14, 2014
ZOA Deplores that Pres. Trump Dined with Jew-Haters Kanye West & Nick Fuentes, and Demands he Condemn Them
News July 14, 2014
Newsweek Op-Ed by ZOA’s Mort Klein: ZOA Honoring Trump as the Greatest President Ever for Israel and American Jews
Uncategorized July 14, 2014
ZOA Honors Trump With Rarely Given Herzl Award for His Great Pro-Israel Work – Joins Ranks of Balfour, Truman, Begin, Meir, Ben-Gurion
News July 14, 2014
ZOA Responds to Questions About Pres. Trump, Kanye West, Fuentes, etc. Issue
Center for Law & Justice
We work to educate the American public and Congress about legal issues in order to advance the interests of Israel and the Jewish people.
We assist American victims of terrorism in vindicating their rights under the law, and seek to hold terrorists and sponsors of terrorism accountable for their actions.
We fight anti-Semitism and anti-Israel bias in the media and on college campuses.
We strive to enforce existing law and also to create new law in order to safeguard the rights of the Jewish people in the United States and Israel.
Our Mission
ZOA STATEMENT
The ZOA speaks out for Israel – in reports, newsletters, and other publications. In speeches in synagogues, churches, and community events, in high schools and colleges from coast to coast. In e-mail action alerts. In op-eds and letters to the editor. In radio and television appearances by ZOA leaders. Always on the front lines of pro-Israel activism, ZOA has made its mark.
Related Articles
OP-ED ZOA Criticizes Obama For Supplying F-16s to Egypt’s Anti-Semitic Morsi & His Extremist Islamist Regime