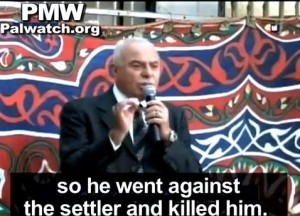 The Zionist Organization of America (ZOA) pointed today to the call by a senior adviser to Mahmoud Abbas, president of the extremist Hamas/Fatah Palestinian Authority (PA), for murderous attacks on Jews living in Judea/Samaria.

The adviser, Sultan Abu Al-Einein, said in a post on Facebook, “Let every hour of the settlers’ presence on our land be a source of threat and terror for them. Let us deprive their lives of security, so that the Palestinian land becomes a minefield against the occupation. Our people will no longer accept condolences for the deaths of its Martyrs (Shahids), and that the occupation must pay the price for our Martyrs’ blood and itself accept condolences [for those killed]” (Facebook page of Sultan Abu Al-Einein, Fatah Central Committee member, July 7, 2014, translation in ‘Abbas’ advisor calls to murder Israelis,’ Palestinian Media Watch (PMW) bulletin, July 8, 2014).

Last year, Abu Al-Einein publicly expressed praise and support for Salam Al-Zaghal, a Palestinian terrorist who stabbed to death an Israeli, Evyatar Borovsky, saying, “We salute the heroic fighter, the self-sacrificing Salam Al-Zaghal … He insisted on defending his honor, so he went against the settler and killed him. Blessings to the breast that nursed Salam Al-Zaghal” (‘Senior PA officials praise violence against Israel,’ PMW bulletin, May 8 2013).

Five members of the U.S. Congress wrote a letter to Abbas demanding Abu Al-Einein be removed from office after his May 2013 statement but Abbas did nothing. Abu Al-Einein held ministerial rank and was an official adviser to Abbas until last year, when he was appointed Head of the Palestinian Council for NGO Affairs by Abbas.

ZOA National President Morton A. Klein said, “This statement, the person who made it and the positions he occupies within the Hamas/Fatah PA tells us plainly why there is presently no prospect of peace.

“Abu Al-Einein has publicly and repeatedly called for innocent Jews to be murdered. His views are mainstream within the PA (he was cheered by the Palestinian Arab audience before whom he praised the terrorist murderer Al-Zaghal last year); he was not relieved of his post by the ‘moderate’ Mahmoud Abbas, despite a Congressional letter to him pointing out his conduct and seeking his dismissal; and he in fact received a further senior position within the PA.

“This incident is only the latest among innumerable cases showing the Hamas/Fatah PA to be a wholly murderous, pro-terror anti-peace organization that should be immediately deprived of U.S funding and diplomatic support.”

We would love to hear from you! Please fill out this form and we will get in touch with you shortly.
Trending Z
News July 17, 2014
ZOA Deplores that Pres. Trump Dined with Jew-Haters Kanye West & Nick Fuentes, and Demands he Condemn Them
News July 17, 2014
Newsweek Op-Ed by ZOA’s Mort Klein: ZOA Honoring Trump as the Greatest President Ever for Israel and American Jews
Uncategorized July 17, 2014
ZOA Honors Trump With Rarely Given Herzl Award for His Great Pro-Israel Work – Joins Ranks of Balfour, Truman, Begin, Meir, Ben-Gurion
Uncategorized July 17, 2014
Zionist Organization of America Honors Donald Trump for Support for Israel, Jewish Community
Center for Law & Justice
We work to educate the American public and Congress about legal issues in order to advance the interests of Israel and the Jewish people.
We assist American victims of terrorism in vindicating their rights under the law, and seek to hold terrorists and sponsors of terrorism accountable for their actions.
We fight anti-Semitism and anti-Israel bias in the media and on college campuses.
We strive to enforce existing law and also to create new law in order to safeguard the rights of the Jewish people in the United States and Israel.
Our Mission
ZOA STATEMENT
The ZOA speaks out for Israel – in reports, newsletters, and other publications. In speeches in synagogues, churches, and community events, in high schools and colleges from coast to coast. In e-mail action alerts. In op-eds and letters to the editor. In radio and television appearances by ZOA leaders. Always on the front lines of pro-Israel activism, ZOA has made its mark.
Related Articles
OP-ED BY: Morton A. Klein ZOA: Iran Pres. Rouhani’s Boasting of Deceiving West on Iran’s Nuclear Weapons Program Underscores the Fraudulence of his Moderate Image